In Barcelona, BBC’s Rory Cellan-Jones asked Hanke whether he’d bet on AR to be more lucrative long-term than VR. “Yeah, I absolutely believe that,” Hanke said. The reason lies in the nature of AR versus VR experiences.

“AR to me is an extension of how we use our cell phones today. VR is much more like a cinema experience where you’re vetting yourself off from the world and you’re having this really fun, entertainment experience. But it’s a session-based experience; it lasts for a finite period of time.

“I think the winning AR solution is going to be one you can have with you all day long and just makes many things that you do on your mobile phone better, more immersive, more convenient.”

Whilst one may expect the creator of an immensely successful AR-based game to say so, in the AR corner we also find Tim Cook, CEO of Apple. In an interview with The Independent (scroll down to the last question in the linked article for relevant points), Cook said, “I’m excited about AR because unlike VR which closes the world out, AR allows individuals to be present in the world” and in a manner that “hopefully allows an improvement on what’s happening presently…

“Most people don’t want to lock themselves out for a long period of time… With AR you can, not be engrossed in something, but have it as part of your world, of your conversation. That has resonance.” He goes on to say he regards AR “as a big idea like the smartphone. The smartphone is for everyone… I think AR is that big, it’s huge.”

In an interview with FIPP earlier this year, Ross Sleight, chief strategy officer of Somo in the UK, said as soon as AR become part of cameras and operating systems of devices such as the iPhone or Snap Spectacles, a whole new world will open up. Cook spoke along similar lines with The Independent, saying, “I view AR like I view the silicon here in my iPhone, it’s not a product per se, it’s a core technology.”

According to Statista, global AR market revenues will reach US $90 billion, compared to US $ 30 billion for VR – and that’s when according to this data set the prediction for 2016 for AR was virtually zero, and for VR US $ 4.5 billi. The jury, however, appear somewhat divided when it comes to forecasts. According to data from Citigroup, via eMarketer (chart below), revenues from software, services and content is predicted to be higher for VR than AR, or roughly equal if AR commerce is included. 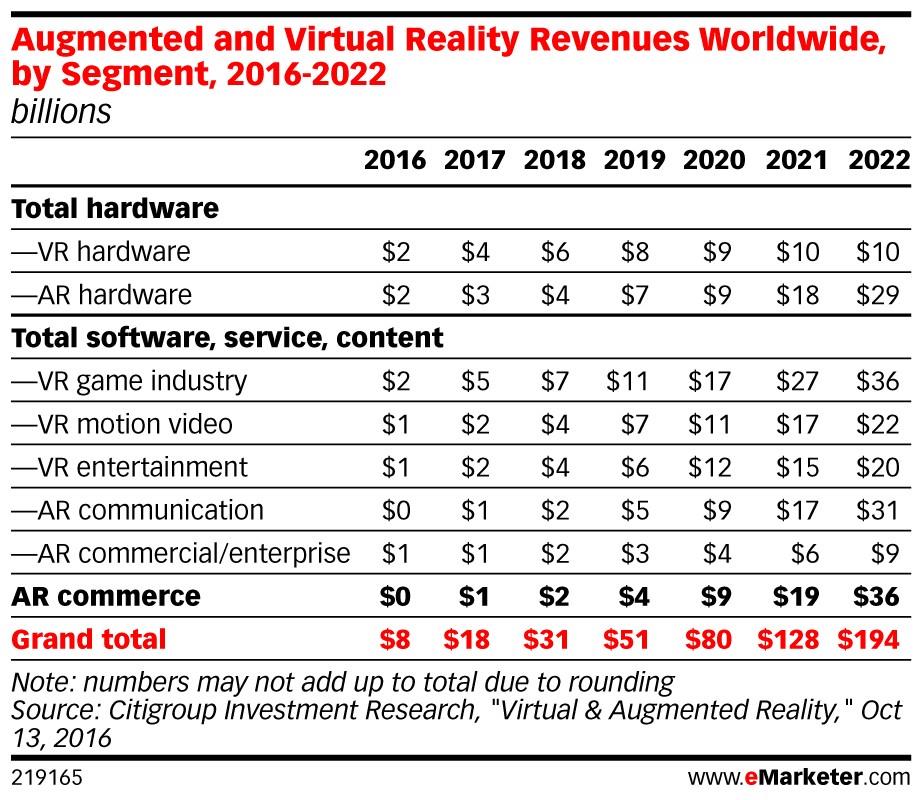 Greg Cornelius is the managing director of Modn Media, a Singapore-agency specialised in the consumer application of emerging technologies on behalf of brands. Greg describes himself as a designer by profession, and a publisher by heart, having occupied management roles at News Corp and APN in Australia, before leading Indonesia’s DestinAsian Media Group, where, among other things, he set up their digital division.

Greg, based in Singapore, started Modn Media in 2013 “to work on innovative marketing technology projects,” but retains a link with publishers, sometimes doing projects “mainly to solve commercial problems”.

Specialised in technologies and developments ranging from beacons to machine learning to IoT, he is a believer in the potential of AR over VR, not that he discounts the value of experimentation by publishers in both. Greg and his team are currently implementing AR projects for the likes of Epson and SO Sofitel Singapore. 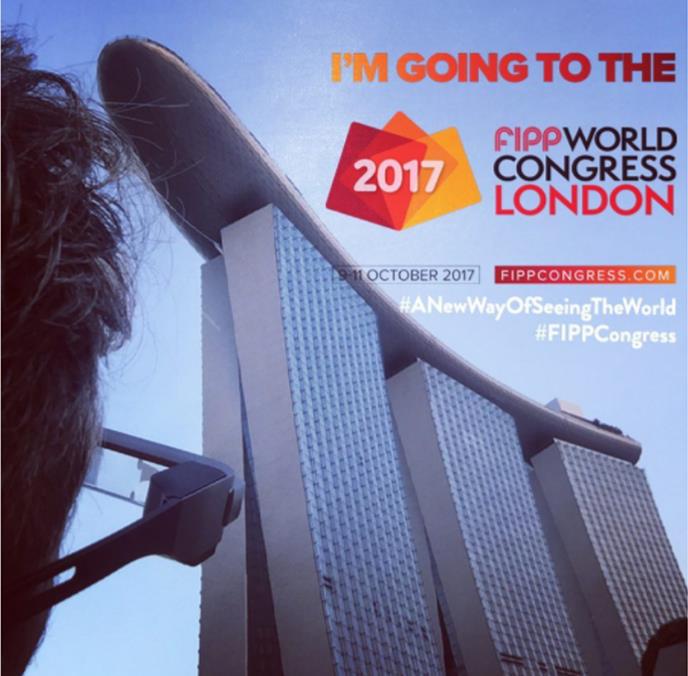 ***Greg will discuss AR, and IoT in a wider sense, and related considerations for publishers in more detail at the 41st FIPP World Congress, taking place from 9-11 October in London. Below he shares some views on the potential of AR for publishers.***

Get stories like these delivered to your inbox every week by subscribing to the FIPP World newsletter.

According to Greg, for publishers it is important to consider segments and circumstances where the different technologies will do well (in other words, put the consumer first in your thinking). He believes VR “has a valid niche in the computer gaming industry” (also refer back to the data in the above eMarketer chart). Beyond that, “there will be smaller market segments for visualising stories” – areas such as editorial storytelling, education, a marketing tool for the travel industry and so on. However, “and excuse the pun, but the main game for VR is gaming.”

Alluding to something Tim Cook touched on, a big consideration for Greg is VR locking the consumer out from the world for periods of time versus AR becoming part of the consumer’s world. “With VR, it doesn’t matter where I am; I am stuck inside the headset. I can’t see the outside world.” Moreover, “VR is only enjoyable in short bursts because the headsets can be uncomfortable.”

AR presents” a different scenario completely. With AR I see an overlay of graphical data on the physical world. AR content is something I can imagine I’ll want and need all day, like the web. AR opens up a greater range of potential use cases than VR, in my opinion.”

He believes geo-specific overlays are an important opportunity. “Say I’m in London looking at the Tower of London, the software algorithms would detect what I’m looking at and display selected information about the Tower in my field of view. That’s a key difference. Beyond content, the implications for localised marketing and advertising are quite profound, I believe.”

Ultimately Greg believes AR and VR may blend into “mixed reality”, but widespread consumer adoption of this will follow only once technologies are sufficiently developed to offer superior user experience and use cases. 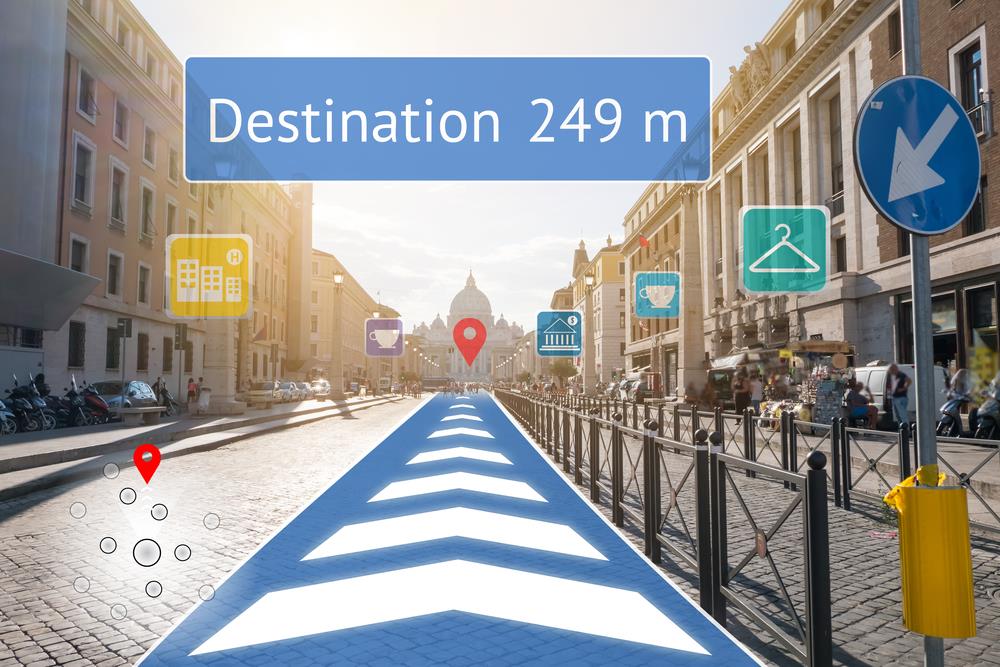 Where and how should publishers invest money, right now?

His advice to publishers is to understand both AR and VR worlds. “In fact, R&D funds should go towards investigations of emerging technologies generally because of the synergies from convergence. For example, AR is more powerful when coupled with Internet of Things sensor data.”

In practice, for AR the key consideration is to “move away from one-way story telling and tend towards interactive exploration. Discount mobile now. It’s already mature.

“Start thinking about lightweight AR ‘headsets’. Buy some for research purposes and get your content on there now ahead of the change that’s coming. For the good of our industry, publishers need to lead this exploration, rather than wait and follow the tech industry.”

Additionally, he advocates engaging commercial partners from the start. “You need to take them on this journey. Else they will find someone else to help them use new technologies to speak to your audience. Which is largely what has happened to the publishing industry during the first waves of the digital revolution.”

Expected AR developments in the next 5 years

Although admitting it is difficult to predict, Greg believes it possible in the next five years that there will be a big iPad moment (note: Greg deliberately uses iPad rather than iPhone moment, to explain how, even without a device solving a particular problem, a market can be made). “And everyone will get light-weight AR ‘smart glasses’ (think here of Snapchat Spectacles, but enabled for AR) just like we got an iPad. It’s interesting to note that there is still no valid use case for the iPad – the iPad doesn’t solve a problem – but they sold in their millions simply because they were desirable.

“A lot of people don’t know what to do with their disposable income. As soon as there is desirable smart glasses, or a contact lens, that connects seamlessly to your smart phone and costs about the same as a smart watch, people will buy them in their millions and the market will be made. I would be disappointed if that “iGlasses” moment hasn’t happened in 5 years time.”

Take a look at some examples of AR developments here and here.

Experimenting with AR to bring “magazine pages to life” is not a new concept for many publishers, but that is simply skimming the surface of what AR is all about. Greg agrees, adding that publishers have to be clear on the “job” each channel is best at doing for the consumer.

“If I choose to read a magazine, I’m comfortable with the magazine format, that’s what I want to do. I don’t necessarily want to go through the palaver of opening an AR app on my phone simply to view a novelty asset. It’s not worth the effort.

“It’s difficult to get people to change behaviour from doing one thing to do another thing. The form factor of smart phones doesn’t help that. Phones are fiddly. So it’s been challenging to link the physical and digital worlds so far. However, AR smart glasses promise to deliver an instinctive user experience – as I glance at something, there its digital assets are, ready to interact with. When that happens, the AR market will take off.”

Download our FIPP Insight report: How to get into VR and 360º videos

AR as the bedrock for visual discovery

In the earlier FIPP conversation with Ross Sleight mentioned above, we discussed the rise of visual search/discovery, and AR within this – developments Ross believes will have profound impact on how consumers behave. Greg agrees on the impact of visual discovery.

It’s “crucial. Improved AR products will allow us to become explorers of digital content related to the physical world. Visual search will allow us to access relevant information there and then, in a way that’s much more satisfying than fiddling around with a smart phone. Scoble and Israel call this the ‘The Fourth Transformation: How augmented reality and artificial intelligence will change everything’.” This is driven in part by technology moving from what “we carry to what we wear”.

Greg believes publishers should take the opportunity right now to strengthen their positions as major content providers of the Fourth Transformation. “As an industry, we cannot wait and see what happens anymore. We have to lead the way.”

AR in the wider IoT ecosystem

Importantly, Greg says, publishers should remember AR “is a presentation medium for the Internet of Things. The convergence of multiple technologies is important here and The Internet of Things especially so. Because the IoT is a sensor network, there will be more and more sensor data (including 360 video) available in specific places and that data is a resource that can be utilised for storytelling.”

Publishers should stop “thinking about augmenting magazines and start thinking about how best to tell stories that augment and explain the physical world as we encounter it. For example, it would make more sense to augment the newsstand than the magazines per se.

“The challenge is that our industry has become a follower. But we have the organisation to succeed with the new medium,” he says, pointing to aspects such as “editorial, production, and sales, customers. The people are in place already. And the terrain is up for grabs. Therein lies the opportunity.

“Instead of waiting for Apple, Google and Facebook to work it out – which they will – we should lead the way forward ourselves.”

Meet Greg at the 41st FIPP World Congress, taking place from 9-11 October (with the main speaker programme on 10 and 11 October) in London, the UK. The FIPP World Congress is the industry’s flagship event, a premium global conference bringing together some 800 delegates from some 40 countries to share knowledge, exchange ideas and meet.