“I love the innovation of this field, but it also produces so much jargon,” Jamie told the audience at Digital Innovators’ Summit 2017 at the beginning of his presentation. 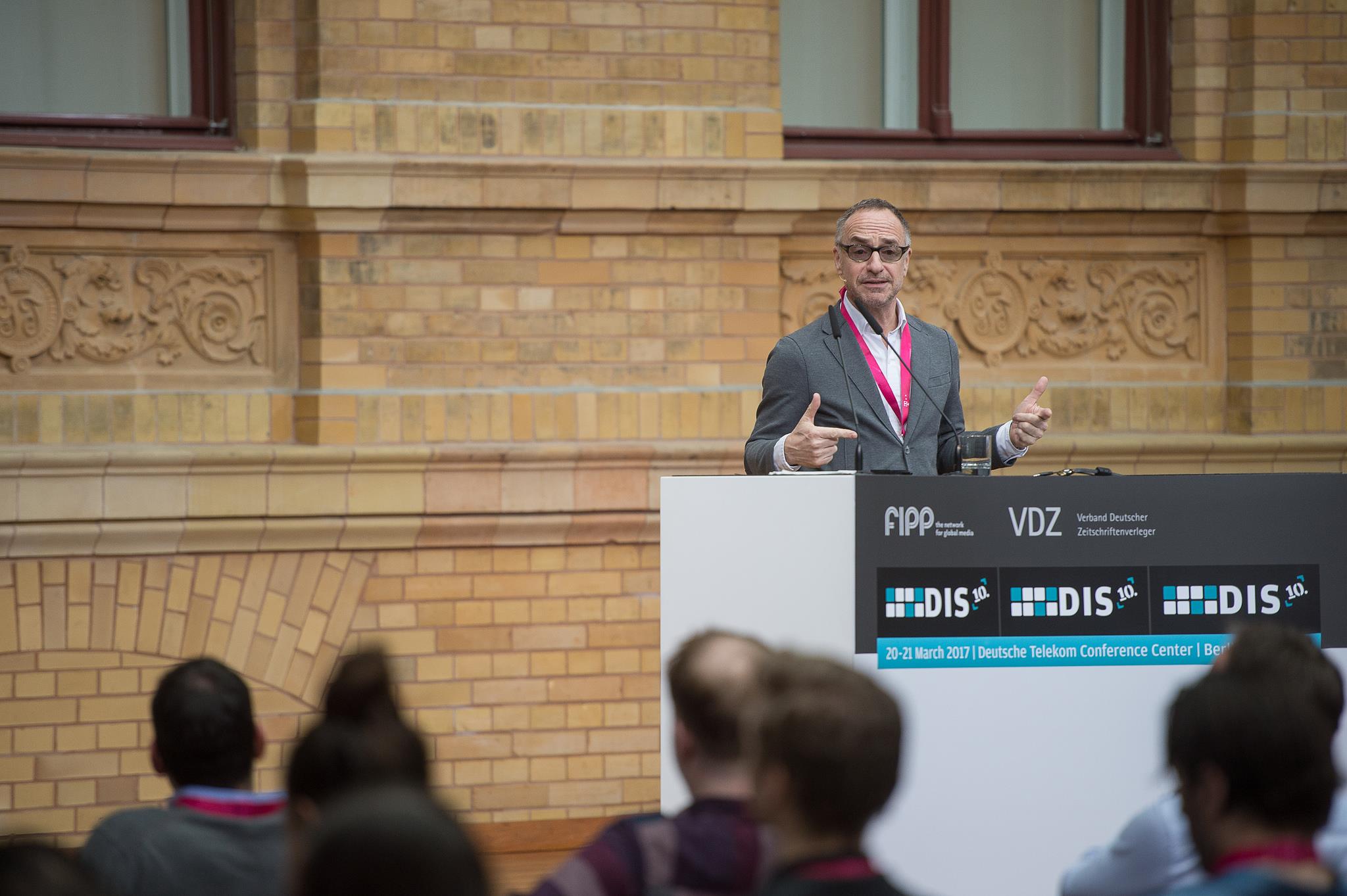 So to begin, he took his audience through some terminology:

– Volumetric: thanks to sensors, you can move around, so your whole body is in the experience – more immersive and engaging. “This is the future, what’s coming next,” Jamie said.

– Presence: if you plug the right combination of audio and video stimuli into your brain, you can trick your brain into thinking you’re somewhere else. If you establish presence, you can generate real empathy for characters that you “meet” in VR. “A good recent example is taking the footage from bodycams from police shootings, in actual place where it happened in US. That’s very powerful,” added Jamie.

Immersive journalism, using 3D space to reimagine news, is becoming reality. “I know it sounds crazy, but 3D is coming,” said Jamie. “The news at the moment is flat.”

Related: FIPP Insight report – How to get into VR and 360º videos

He gave an example from back in 2012, when his co-founder Nonny de la Peña created a video based on some audio her intern recorded. A homeless person had collapsed in a queue as he waited for food, and Nonny created a basic VR experience of the incident. When she tested it on users, they would go down on their knees to “see” the man, move around carefully avoiding his body, and cry as though it were actually happening. This, said Jamie, was the beginning of immersive journalism.

Why now is the time

Jamie argued that because the tech has come so far, now is the time that we’re going to begin to see VR everywhere. Through outlets with already-vast audiences such as Playstation, Facebook, and Steam, VR will be able to reach enormous amounts of people.

Jamie explained that there have been some other exciting developments of late: photogrammetry is a 3D simulation of a space which requires only a SLR camera. The image is volumetric, creating a 3D colour-rich experience like a photograph. The resulting image is “astonishingly rich in detail”, he added.

A second development is videogrammetry. This consists of holograms of human beings, for example, with real depth and substance; one example is of a prison cell where you sit with an inmate who tells you what it’s like to spend time in prison.

Jamie envisions that we will see in the very near future:

– Social / shared experience – being with your friends as you move around, or instead of having a conference screen, you can feel like you’re actually in the room with your colleagues

– Outward-facing sensors potentially on next Apple device – smartphones will allow you to have these 3D experiences, so that within a few years, 3D capture will be available to everyone on smartphones.

On a more existential tone, Jamie addressed a common question he encounters about why all this research into VR is being done. “It can seem a little sci-fi, I know,” said Jamie. “But the emotional impact of VR is huge and powerful: it has been well-documented, and could even be a little dangerous, because it extracts such powerful empathy from users. But 3D depth perception has the potential to help make us more intuitive and more informed – which is why I think we do it.”

Read more about how VR is already changing journalism in our Q&A with Jamie here.