It's been five years in the making, but National Journal has successfully pulled away from advertising, as a revenue stream. Based in Washington, DC, National Journal is an Atlantic Media brand that serves government and business leaders with intelligence, insights, and tools, and a suite of trusted journalism including NJ Daily and Hotline.

Advertising, which provided 1.4 per cent of overall revenue for the company as of last year, steadily became less of a focus, while the company had been simultaneously and aggressively growing other revenue streams. “It's been coming for the last five years,” Kevin Turpin II, president of National Journal explained. “Earlier this year, the makeup of our subscription business, which helped support the advertising case, shifted. As that happened, the decision to halt our proactive advertising offering became easy for us.”

Advertising revenue had become such a small part of their overall revenue mix, that when Turpin and his colleagues weighed the effort of going after that revenue versus its output and then against other opportunities in the market, it became a natural decision to let it go, he said.

“All of our journalism properties are a hundred percent supported by subscription revenue,” Turpin said. “We've also created - and this is what we've been working on for the last five or six years - a research and advisory division separate from our journalism properties that has various revenue streams. This part of our company probably reflects more of a consulting model than a media company.”

“I think the diversity of revenue streams is so important to National Journal, and I think it's important for any media company not to rely on one revenue source,” Turpin said. “(Some) media companies are relying on revenue sources that are really challenged, such as print and digital advertising. Those markets are highly competitive now that some of the largest and most successful companies in the world have entered them.”

Print advertising has been in decline for years. On the digital side of things, it’s extremely difficult for media companies to compete against digital giants like Facebook, Google and Amazon. According to eMarketer, Google commanded 37.1 per cent and Facebook captured 20.6 per cent of the US digital ad spend in 2018. 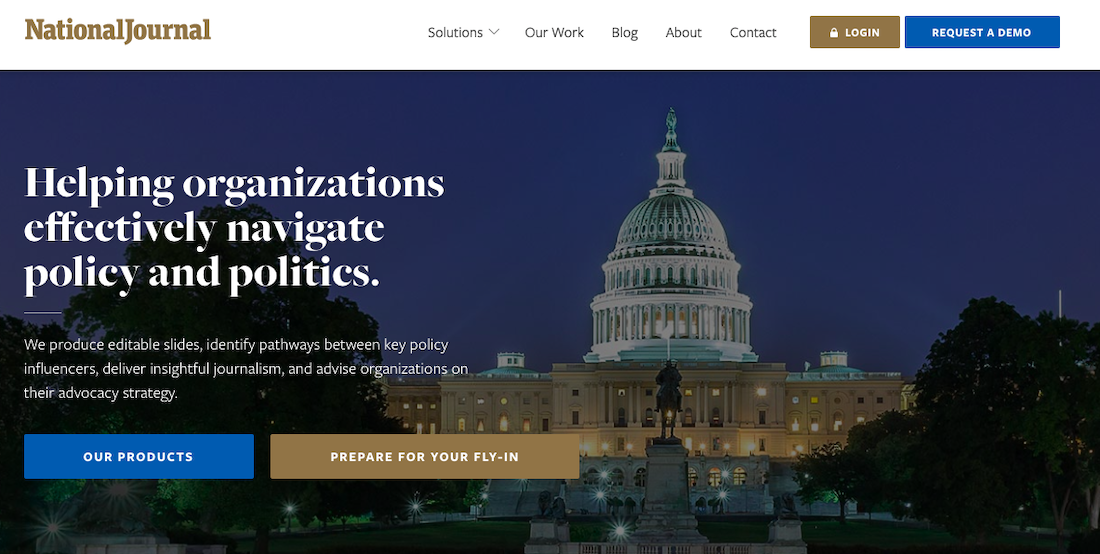 Yet, advertising in both digital and print, remains an indispensable part of the revenue pie for many media companies. Some media companies – like The Atlantic, which shares a building and owner with National Journal – still rely on advertising as a revenue stream, successfully. But writ large for the industry, it's very hard work, Turpin said. “When you're relying only on that revenue stream, you're really fighting an uphill battle every year to figure out how you are going to try to grow your top line at scale,” he said.

Diversifying revenue streams helps open up the probability for growth in business, Turpin said, “because you're growing into areas that make sense for your business and you're providing value to an audience that you've spent, sometimes, decades developing relationships with.”

For Turpin and National Journal, transitioning the media brand away from traditional revenue and business models has helped it evolve. Now that it's reached this milestone, he concludes that the process has brought both joy and pain.

“The joy is that you're tapping into new ways for your business to be successful and you're constantly thinking about what's next, and that's joyful,” he explained. “It's always joyful to create something new and then have the reinforcement of your market responding positively to your product or service. But sometimes you can get certain things wrong when you're trying to innovate constantly, and you have to be willing to accept those mistakes and then pivot, which often times is painful.”

“It's hard to launch something new that you think you have gotten right, but you are a little off. The key is realising that you are wrong as early as possible and then moving with speed to make the proper changes,” he said.  “I think, for media companies, having the willingness to try and fail is much more important than getting every product that you launch right.”

But, National Journal's case provides hope for others in the industry that transitioning from old revenue models to alternatives and new models is possible. “Our main insight is you have to really get to know your audience and what they really value from you, and then orient your business and strategy around that,” Turpin advised. “And, oftentimes that means looking at yourself in the mirror and realizing there are things that you value internally that your audience has stopped valuing. There should be no sacred cows in your business when seeking to drive your business towards growth.”