It is early days for developing new mobile storytelling formats. Despite some successful prototypes, most of the heavy lifting is still about to happen, says Jacob Gjørtz, VP marketing at CCI Europe. Based on what we have learnt this far, brevity, video and AI will be central to what happens next.

Since 2007, when touchscreen mobile phones started their march towards proliferation, media platforms, publishers and content management system developers have been experimenting with a number of new storytelling formats for mobile. More than a decade into the process, and we are still essentially at the very beginning, says Jacob Gjørtz, VP marketing at CCI Europe, an international software company responsible for developing multi-channel publishing platforms for a number of global media companies.

As news publishers, and increasingly magazine publishers, continue to realise they must “own the phone” to be able to grow and monetise their brands, “there will be a lot of development of native mobile storytelling formats in the immediate future,” predicts Gjørtz. “Lots of these formats will begin and end their life as experiments as we enter a time of even more trial, error and testing than ever before”.

That does not mean, however, that the development of the last few years has not been of vital importance, says Gjørtz. He references several formats that can be considered trailblazers. Up there at the top are Google’s AMP Stories format, several successful experiments by the BBC’s Research and Development Unit and the work being done by other news outlets such as Quartz, The Guardian and Axios. In each of these lie the foundations of what can be expected in the future.

What have we learnt this far?

Despite the dominance of AMP Stories, says Gjørtz, the so-called ‘Story Format’ is not a Google invention. The format has been developed over several years by social media platforms such as Snapchat and Instagram. “This way of telling stories is focused on more visuals and less on text, and caters for the ‘lean forward moments’ during the day, i.e. the moments when we are on the go and use the mobile for quick content consumption.”

However, says Gjørtz, Google developed this format to be optimised for mobile in such a way that they managed to liberate it from any specific social media platform. This development means Google managed to enable publishers to embed the story format on whichever platform they wanted. As the name AMP (short for Accelerated Mobile Pages) suggests, it loads quickly and enables publishers to create visually focused content in a simple, swipeable format on mobile phones. 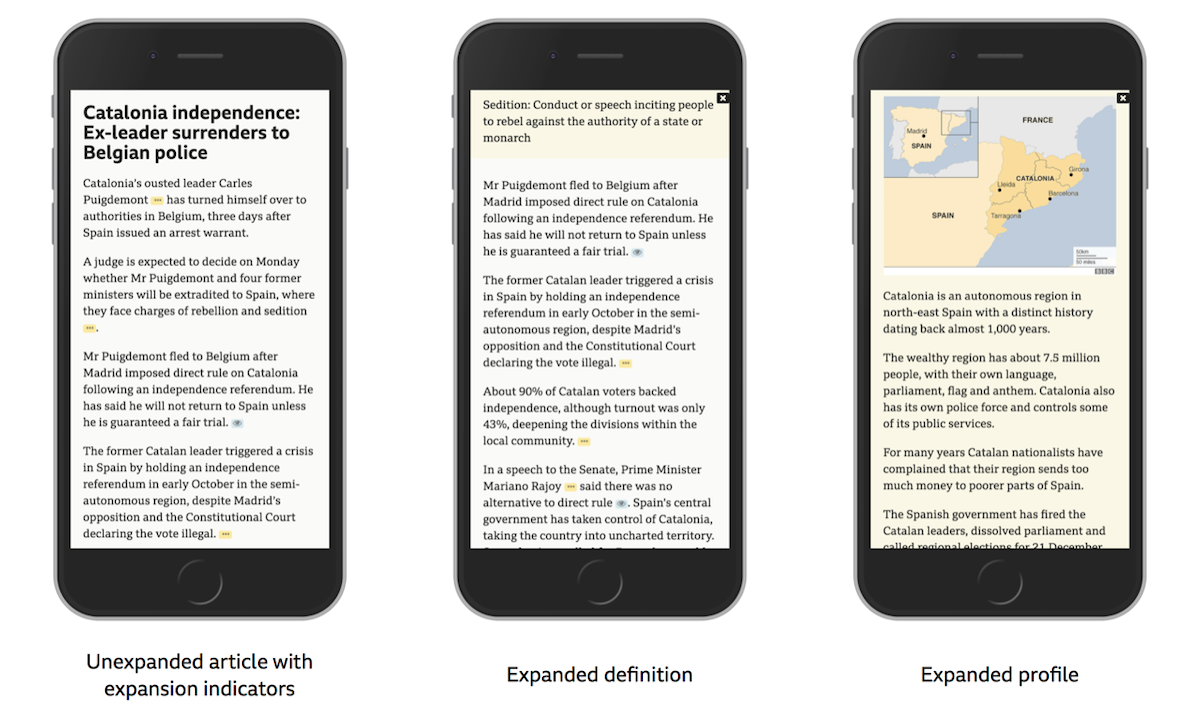 Developed by the BBC, the Expander format allows for vital text components making up the main story to be loaded with coloured ‘expander markers’. “When you click them, they open into expanded content, which could be text or images, or both. This is taking the good old principle of footnotes and elevating it into the text as hyperlinks. It’s then entirely up to the reader to decide how much of the additional text and images they decide to consume.”

From the Incremental format: let the user decide where and how they want to navigate next

Also developed by the BBC, the Incremental format allows users to decide how they want to continue to consume content. After a short intro explaining the context and gist of a story, the user can click to dive into the story in video form, long form, short form, more images with text, infographics or skipping over the story in its entirety.

From the Viewpoints format: present elements of objectivity

The Viewpoints format was also formulated by the BBC’s Research and Development Unit. It emulates the so-called ‘Tinder format’, says Gjørtz and allow users to swipe right or left to reveal various profiles of people who presents different viewpoints on any specific issue being covered. It proves to be very popular with users who believe real people expressing their views can be trusted more than journalists reporting opposing viewpoints.

Developed by The Guardian’s Mobile Innovation Lab, Smarticles were designed to meet readers where each of them are in their specific knowledge of a developing story. It aims to only present story elements that are most useful to each individual reader. In practical terms, it means that every mobile story is broken into core elements, or information blocks. When a reader first visits the page, the blocks contain the most fundamental story details but when the reader returns to the story later, an algorithm determines what new information or major development in the story should appear based on the content consumed already.

Developed by Axios, this format has been criticised by some media commentators for a high degree of pretentiousness by its “smart” creators. Firstly because “smart” reporters need to decide, and by definition know better than the public, which elements of a story is important enough to be highlighted and secondly because those same reporters than also decide which elements of the story should be summarised and/or deleted from the story to be able to reduce word count to below 500 words. It is agreed, howerer, that if not always smart, the the positive contribution brought to mobile storytelling by this format is the fundamental focus on brevity.

This format comes in response to research conducted by Quartz who found that readers seldom consume content with a word count between 500 and 800 words, the typical length of stories from the legacy left by print. The Quartz Curve was originally developed with focus on digital articles in general and not specifically with focus on mobile. However, with the proliferation of mobile, the Quartz Curve has become even more relevant and important. 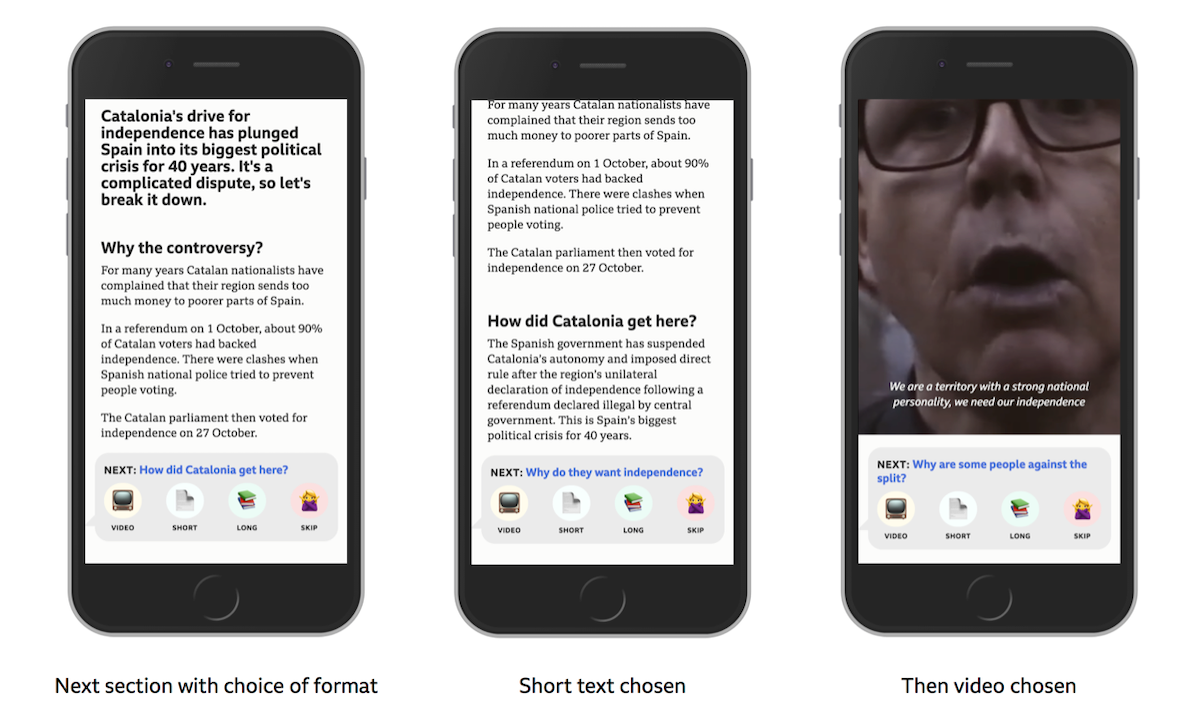 Gjørtz says CCI started in 2016 to develop a content management system that will take into account most of the aspects mentioned above to try and create a user interface that brings together everything that is needed to create successful mobile storytelling. The system, called CUE, remains in a process of continuous development, just as he foresees most developers will need to experiment and develop more formats in the foreseeable future.

Two formats they have taken particular interest in because of the strong correlation with what CCI wanted to achieve within its CUE content management system, were AMP Stories and Expander. The system is flexible enough to build stories in such a way that they can be exported as both.

Expander itself also offers great flexibility and the elements of it have been integrated into CUE. “The great thing about this format is that you curtail your word count to create content within the boundaries set by the Quarts Curve but in effect it is both short and long. The ideal is for this story to be below 500 words but then you add links to it that creates embedded context and creates the opportunity for readers to delve much deeper into the details of a story. It is an inherent long format within short format.”

With what CCI have learnt overall, Gjørtz predicts that future development will be driven by three themes taken from the successes achieved by experimental formats:

1. Video will take over from text: “Where stories were traditionally text based and text heavy, there will be an even stronger shift to video storytelling. Short text will only remain to provide context to video.”

2. There will be short form or long form but nothing in between: “Stories between 500 and 800 words will die within the mobile context.”

Gjørtz predicts that it’s just a matter of time until someone cracks the code to create exactly what is needed to fulfil mobile storytelling within the parameters as set out above. “There are already companies working on how to glue together the engines that analyse user behaviour and then integrate it with the various components needed to create one efficient mobile storytelling system. This has not been fully evolved but it is bound to happen within the next few years.”