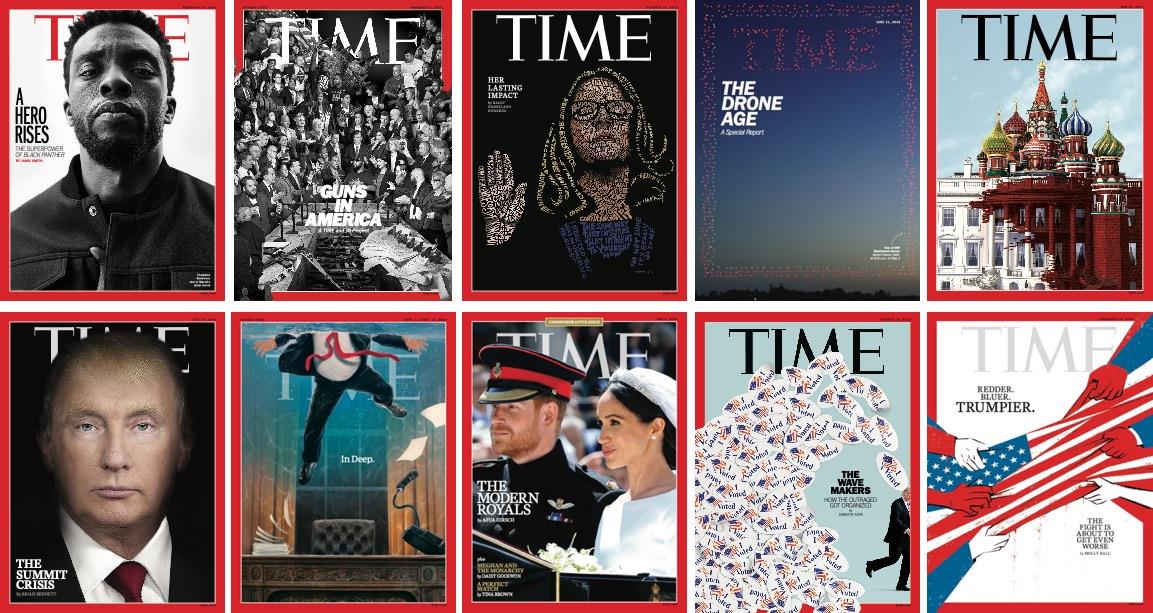 With that in mind, FIPP asked D.W. Pine what goes into thinking about, creating and developing the art inside that iconic red border.

What do you hope to convey via Time covers?

The cover of Time crystallises what’s important in a simple, graphic, impactful 8-by-10 space – and it’s that curation that is powerful in a day where most, if not all, of our visuals are presented in an instant and gone tomorrow. The Time cover – with the iconic red border – is able to penetrate the cluttered media landscape, grab people’s attention and make them think. It’s the power of Time.

How does cover art explore the world’s most complex issues?

Even with the dramatically increased competition for people’s attention, the Time cover is as relevant today as it was 95 years ago — maybe even more so given the current climate of distrust in news. We live in an extraordinarily complex world with few simple answers. For me, an image — whether a photo or illustration — goes beyond the familiar saying, “an image is worth a thousand words.” It’s more than that. It has the power to cut through the clutter of tweets and 24/7 news and competing voices.

Are cover lines or captions necessary? Do covers tell stories without words?

Cover lines aren’t always necessary, but they can certainly compliment the visual. For a cover about the Russian influence on the White House (May 2017), we decided the image of the Kremlin overtaking the White House was strong enough on its own. Most people now see Time’s cover digitally, so I’ve had to adjust the typography and placed more emphasis on simplicity. We try to create more of a poster each week.

What stories or messages have Time covers told over the last 12 months? What would you say have been some of the big issues?

We’ve obviously continued to cover the Trump Administration (assessing his foreign policy decisions and growing investigations), but this year we’ve also tackled the increased gun violence in America (with a gatefold cover photographed by J.R. of more than 240 people in the middle of a gun debate), drone technology (featuring nearly 1,000 drones flown in the sky creating our Time border and logo), the contentious Supreme Court nomination of Brett Kavanaugh (with a graphic portrait of Christine Blasey Ford made up of words from her powerful testimony) as well as the midterm elections, the royal wedding and more than 40 other news and feature topics that made up 2018.

Is it difficult or challenging to choose a cover image? Who decides? Who makes the final decision?

Producing the cover of Time each week is obviously a team effort. It comes down to about a half dozen of us in my office coming up with cover lines and concepts, sometimes for hours on end. Most weeks I’m doing dozens of different approaches. At the end of the day (typically Wednesdays), what becomes a Time cover is the decision of editor-in-chief Edward Felsenthal.

How do you choose between photograph, portrait, picture or illustration (or, drone?)? What best tells the story?

What I’ve always loved about Time is our authority to cover a wide range of topics – from health to politics; business to sports; science to world news – and our readers expect that coverage from us. The same variety holds true for how we visually present a topic. Some weeks it’s a stylised portrait, other weeks it’s a graphic illustration. Sometimes it’s just type, other times it’s a news photo or a painting or drone photography. The visual approach depends a great deal on the subject or idea we’re trying to convey and that changes week to week.

How is it that these covers become so iconic? Award-winning? Thought-provoking?

It’s been said that the cover of Time is the most important real estate in journalism. What goes inside the red border each week is a statement for what our readers need to know and there is an enormous amount of care and responsibility that goes into each individual decision. Over the past 95 years, Time covers have been provocative, controversial and often lead the national conversation whether it’s about parenting, technology, health or politics.

What are some of your favourite Time covers? Why?

It’s so hard to pick just one – each of one of them have their own inside story to tell. I only have one Time cover hanging in my house – a 1950s cover about Coca-Cola created by artist Boris Artzybasheff, who painted more than 200 covers of Time from the 1940s to the 1960s. It’s a rather whimsical illustration and being from Atlanta I’ve grown up with Coca-Cola. But it primarily serves as a reminder to me of the great artists who have worked on a cover of Time.

What about this brand’s art make it an exciting, yet challenging place to come to work every day?

Not only do I get to work alongside some of the smartest journalistic minds, but I also hire some the world’s best illustrators and photographers, who want to showcase their work and help us fill that blank canvas each week. That’s a rare and exciting combination.

Does a magazine cover still hold power? What do covers mean today? Do you think covers are still valuable on the newsstand, or in today’s multi-platform environment?

The design mission of a Time cover is to make a clear and graphic impact as simple as possible – so in that sense, we have the newsstand buyer in mind. The very fact that we print the magazine and all the effort that goes into producing becomes an incredibly valuable tool for people. If we only recreated it online, it wouldn’t gain as much traction or have as much impact. Fortunately, we don’t have to choose. We print more than three million issues globally each week, reimagine it for multiple platforms and the past four years we’ve animated the cover each week for our more than 46 million social followers. We’ve certainly been able to introduce Time to a whole new audience.