As a serial entrepreneur in the digital media industry and an international consultant for automated content projects (“robot journalism”), Wolfgang knows a thing or two about the subject. 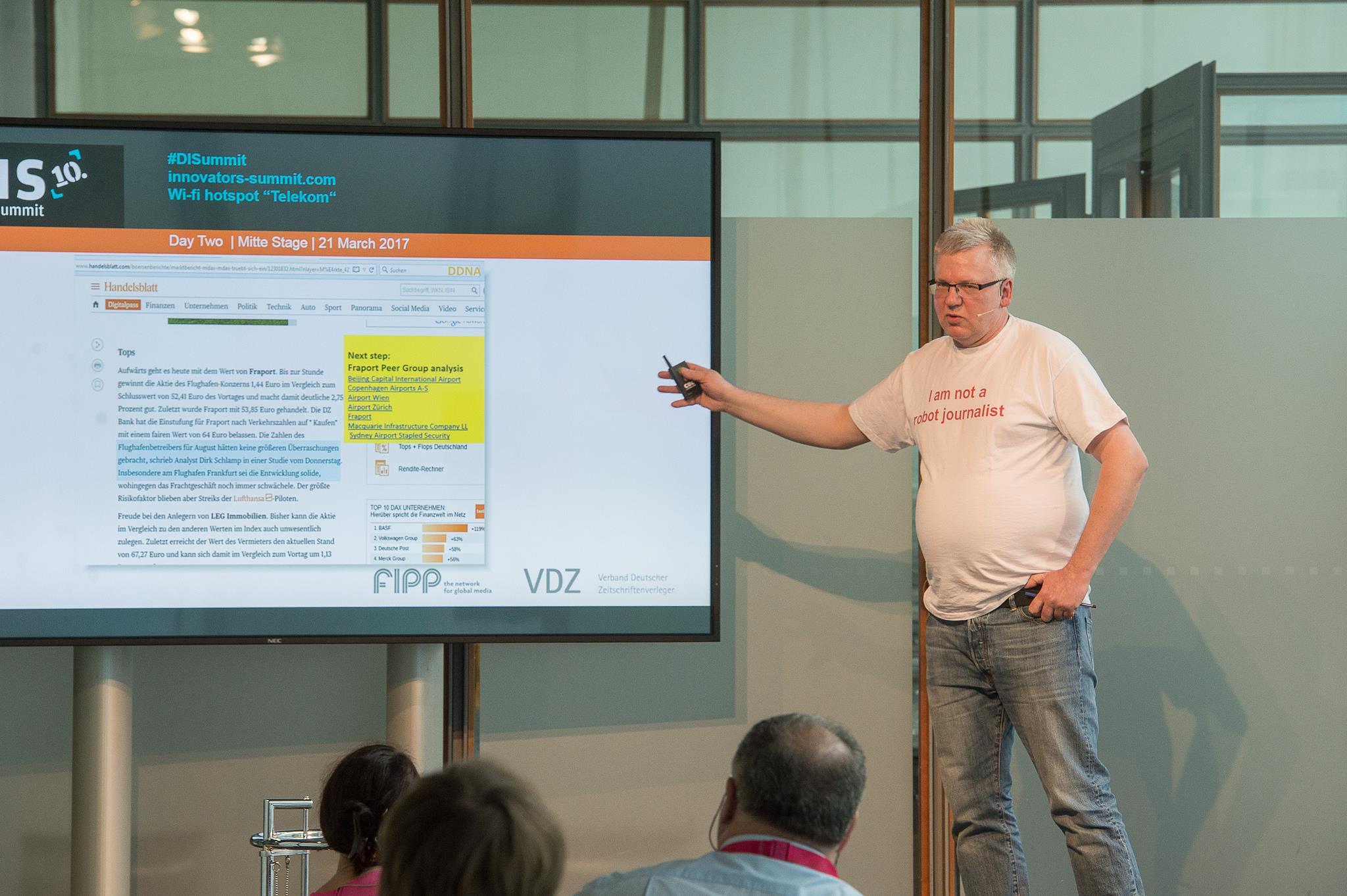 He currently works with five of six global robot journalism companies to help find the custom solutions for media outlets. He gave one of the final talks at DIS 2017 with a fascinating presentation about how journalists and media companies can embrace automation without fearing for their jobs.

According to a recent BBC report entitled “The Future of News”, 90 per cent of all news will be computer-generated within a decade – but that doesn’t mean robots will replace journalists, began Wolfgang.

“Great content remains very important,” he said. “Robots can learn how to do difficult things, like integrating quotes into text,” augmenting content and/or freeing up human journalists to focus on more depth.

Wolfgang listed some of the reasons why media companies and journalists should be considering automated, data-based content:

1. There’s not only a potentially limitless number of stories, but they are 100 per cent precise and unique.

3. If you invest in automated content, you’re then halfway to chatbots and automated video and audio services – in other words, paid services.

4. Stories can be personalised.

5. Running costs are just 1-5 per cent of human costs.

6. For human journalists, it opens up time for analysis, interviews, and background research.

7. Stories aren’t always for publishing – data analysis and drafts can be interesting and useful in themselves. “The Financial Times in London, for example, saves up to 80 hours per month on data analysis thanks to our automation software,” said Wolfgang.

Other case studies Wolfgang has been a part of include a financial portal (English language) and a French magazine where a chatbot answers Messenger questions such as “where can I get a job?”.

How to get started

Wolfgang ended his presentation with some advice for those interested in combining automation and news. “The first thing I’d say is address any difficulties with IT departments!” he said, since they can take some time to adapt.

“Next, identify an exciting topic,” Wolfgang went on. “Identify the necessary data source, build a data interface, and get data on board: some clients need up to six months for this. Then, build a data model: teach robots (your new ‘colleagues’) how to interpret important facts. Eventually, you can generate text out of interpreted and summarised data.”

Wolfgang also warned against taking time away from (human) editors – “automated content should help, not disturb,” he said. “All basics must be delivered, only the perfect final cut is up to your editorial room. Let your idea be checked internally.”