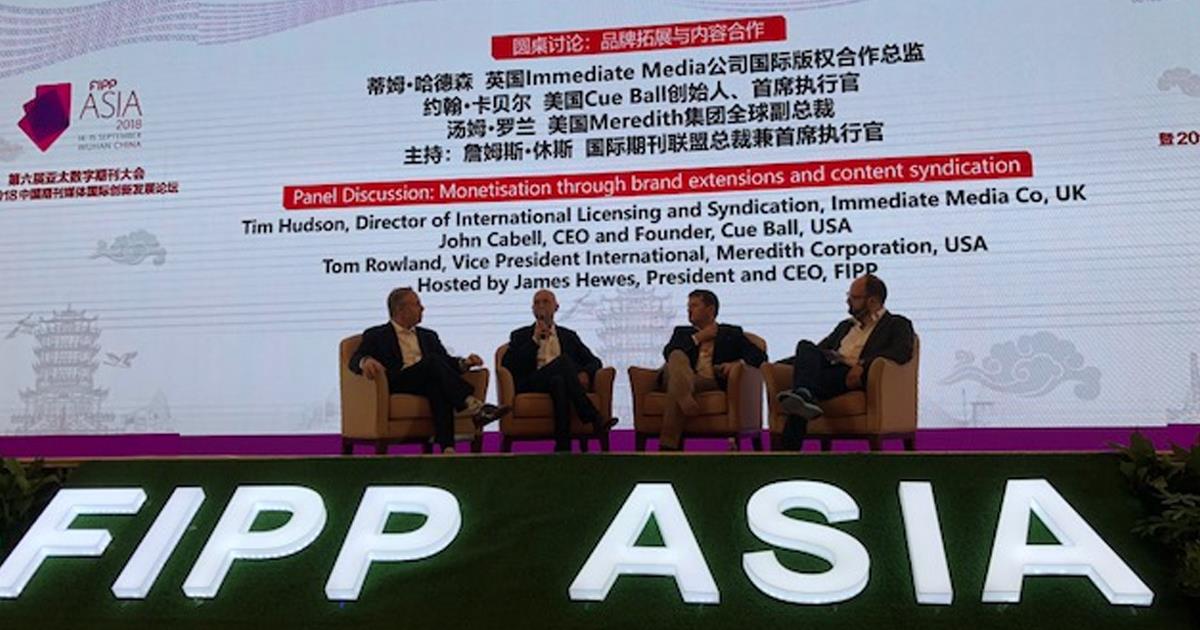 Ten years ago a panel discussion at an international conference about magazine publishers growing global business would certainly have focused squarely on magazine licensing – and gloating at the profitability of this. Fast forward to 2018 and the only certainty is the steady decline in traditional licensing revenues. How are publishers responding to this change in the market?

This question was the focal point when FIPP president and CEO James Hewes moderated a panel discussion at FIPP Asia in Wuhan, China, an event co-hosted by FIPP, the China Periodicals Association and the Hubei Administration. Hewes questioned three industry experts: John Cabell, founder and CEO of Cue Ball, an agency responsible for international licensing on behalf of clients such as Meredith, Bloomberg, Aljazeera and other large publishers and broadcaster around the world; Tim Hudson, director of international licensing and syndication at Immediate Media and Tom Rowland, vice president international at Meredith Corporation.

The experts agreed that the landscape has undergone huge transformation in the past decade. For the combined brands owned by publishing giants Meredith and Time Inc., the so-called “traditional local licensed editions of their brands” historically made up the vast majority of their revenue. Today this is far less significant. How do they make up for the shortfall?

Rowland said parts of this revenue stream has been replaced by significant growth of revenues in areas such as video. Meredith now has four in-house video studios producing around 60,000 videos annually across their brands, being licensed to or used by partners. In the same way digital content licensing has more than doubled from 14 per cent of overall revenue in 2008 to 33 per cent in 2018.

Then there is income from products that did not even exist ten years ago, such as merchandising, branded education programmes, or investment products that is branded and supported by one of their brands. “These are great examples of the flexibility and diversification that publishers are required to have these days.”

Cabell said most of the publishing businesses Cue Ball represents have moved their focus to being digitally-led, and sometimes, even in the case of legacy media, digital only.

The interesting thing, however, stressed Cabell, is that content per se, and not brands, has become much more important in terms of syndication. He referenced that a significant number of his clients expanded into various areas of monetising from content, such as companies with an online education offering that will now offer educational content to licensees.

Another example of diversification is TimeOut. The brand that has gone from a print publication advising readers on where to dine out and how to enjoy themselves, has not only moved its content into the digital sphere but is seeing its future growth invested in TimeOut marketplaces. These are physical spaces across the globe where people can go to dine and enjoy themselves. TimeOut shares revenue from each stall in these global ‘marketplaces’.

Although agreeing with the overall theme of diversification, Hudson said at Immediate they continue to see growth in the print sector.  “Of course a lot of businesses are now multi-platform, but do contain strong print elements”.

One other area he identified for growth is events. “We launched a particularly successful large scale events business in the United Arab Emirates with BBC Good Food, which is very profitable both for us and our partner.” 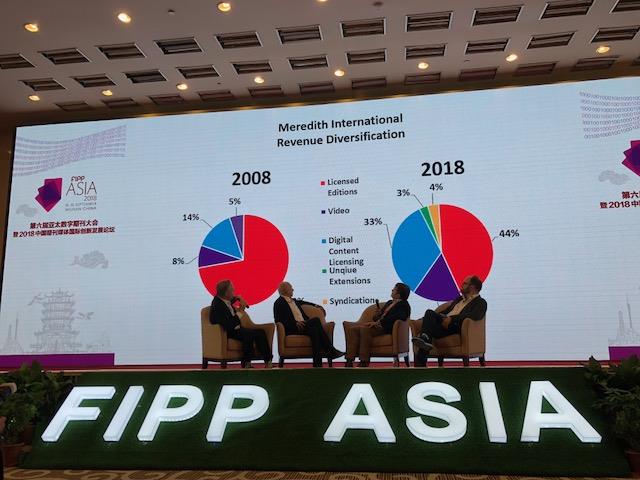 For brands selling consumer products there is also new revenue opportunities. As one example, Rowland referenced the 15-year licensing agreement Meredith signed last year with Wal-Mart Stores Inc. Products sold at Wal-Mart under the agreement are featured in the Meredith flagship magazine, Better Homes and Gardens. The products include bedding, bath accessories, dinnerware and throw pillows, making this deal the largest Better Homes and Gardens product extension in the brand’s history.

While this deal is largely focussed on the US, to take such a model international will be a huge opportunity, said Rowland.

It’s not only the way business has changed that opens up new revenue opportunities in new regions across the world, but also how business responds to differences within specific world markets that can make or break deals, the panel agreed.

Rowland warned that publishers need to be sensitive to these differences if they want to launch successful international partnerships. “What works in China might not work in Japan, or Russia or Brazil.” It takes sensitivity to the markets and an understanding of the unique opportunities each region offers.

One thing, however, “that everyone still wants, despite the region, is print”. In fact, Meredith has launched six print titles over the past two years across territories. “In a sense print titles can be described as territorially agnostic,” said Rowland.

Having said this, “another thing that holds true” is that a successful brand now grow across multiple platforms. The success of some of the digital manifestations of those (print) brands can differ from region to region, where a mobile site might work well in one regions, an app in another region, a very high end print publication or events elsewhere.

Cabell concurred. He said the days when you could say one region is a hot growth area and another one not, are long gone. “I don’t see that anymore. It depends on what the product is, its format, its content.”

According to Cabell there is a huge opportunity for media groups to offer syndicated content for use on platforms in China. On top of this the events sphere here also offer opportunities, especially with regards to exhibitions. “We are looking at a permanent cultural exhibition as well as a travel exhibition.”

In China, he said, many clients are interested in content about science, culture, education and technology. “This is really where the opportunities are.”

Hudson said an area where they have seen huge potential in China is the bookazine market, especially across the fields of history and science. “The educational element within our portfolio across history offers opportunities for both print and digital.”

He said as China’s middle class grows it will open up chances for specialist media because people will develop more hobbies and passions. Immediate’s content within their crafts and sports titles could become valuable assets as this market.

Rowland agreed but warned that China should not be viewed as a great market purely based on the huge numbers its population offers. “You really have to find a sweet spot for your content… we try to be very flexible in term of listening to prospective partners in China and take note of what they tell us.”

As one example, he mentioned that hi-end brands seem to resonate very well with audiences in China. But he also warned that some titles could take different product forms. Again, “what’s been successful in the US might not be in China… we (need to) take a lot of guidance from the local expertise in the market”.

The power of hindsight – Delayed Gratification