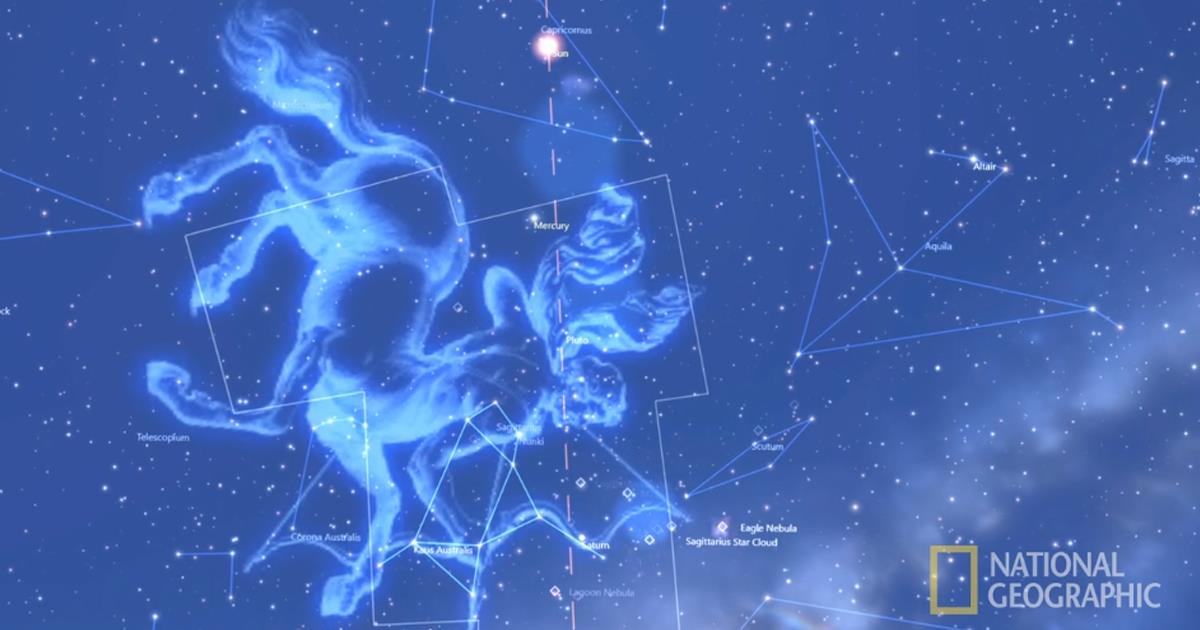 “Nobody has ever done this, anywhere in the world,” Fontana explained. The world’s first open-air augmented reality planetarium was created by Fontana, who is the founder/owner of Au Diable Vert in Glen Sutton, Quebec.

Called National Geographic ObservÉtoiles, the AR experience is an example of how private enterprise and publishers can come together to tell stories in an experiential way, giving audiences something they’ve never seen before. National Geographic has signed onto the new augmented reality stargazing show, with a  licensing deal to export the concept worldwide.

Fontana and his wife bought Au Diable Vert, a wilderness resort about an hour an a half away from Montreal, 13 years ago when it had two cabins and a few campsites. Since then, Au Diable Vert has expanded to 365 acres with 27 accommodation options, and offers visitors some of the darkest skies in the country. The site is accessible only by foot and is located 1,100 feet up the side of Mont Sutton, about two kilometres from the US border. It looks directly into the Green Mountains of Vermont.

For years, Fontana, a former marketing strategist, and his guests would marvel at how dark the night sky was from Au Diable Vert. “One of the things we hear from the guests all of the time is that people are blown away at the night sky. We have almost zero light pollution, since none of the camp sites or cabins have electricity and cars are not allowed anywhere on the site. But, because we are on the southern-facing slope of a mountain looking into an area where there is nothing – the skies are incredibly dark,” Fontana explained.

Over the years, Fontana tried different things to capitalise on the dark sky, selling star charts, setting up telescopes and the like. “Every time I was doing something, I couldn’t help but think there had to be a better way to engage a large group of people,” he explained.

He began testing out ideas – from the ‘star coffin,’ which was going to be a heated box they were going to stick guests in with their heads sticking out, so they’d be able to go outside in February – to a giant inflatable dome, so they could have a transparent planetarium, but the plastic wouldn’t take the cold or the wind – to a US$60,000 Swiss laser to blast the constellations against the real stars – but none of the ideas were technically feasible.

Then, he came upon augmented reality.

“Much to my surprise I found Aryzon, a Dutch startup, on Kickstarter,” Fontana recalled. “They were doing basically a Google Cardboard for augmented reality, but instead of having all of the technology bits, the GPS, the compass and the accelerometer and the camera, it was a transparent window with a smartphone inside, and the smartphone is not in front of your eyes, it’s kind of in front of your nose. And has a system of mirrors and lenses and one-way glass.”

Fontana approached the company and asked to adapt the headset to suit his project purposes with a transparent visor.

Then, he got in touch with the developers at Star Chart, the top night sky app. “There’s a version for every single phone, platform, PlayStation and Occulus, and then, I called them up, and they were like, we haven’t gotten a call with this idea since we did a demo for Google Glass six years ago. We’re totally in.”

The show works off an Asus Zenfone 3, a 5.5 inch thin and light smartphone, with an AMOLED screen with full HD resolution. The app Fontana uses runs on the backbone of Star Chart, which works around the world and translates into 14 different languages. “(StarChart) adapted their app for two different screens like you’d have in a VR headset. And, then we adapted the content inside, to not be so heavy,” Fontana explained.

The project began to take shape. An American company built Fontana’s 184-seat Roman amphitheatre into the side of the mountain with heated stadium seats, essential to stargazing year-round. “They’re designed to heat up 80 degrees, from -30 to +50 degrees Celsius.”

The story of the stars

But where to get the storytelling? This was essential to Fontana’s plan. He wasn’t so much interested in the science, as the story, the mythology and romance of the night sky. How could he get a large outdoor audience to explore the night sky together?

As an avid sky watcher, it can be a challenge to show people the night sky, Fazekas explained. Astronomers can give intimate tours of the sky to small groups of people, pointing things out. “Because there is a limit, right? With the human finger pointed upwards, you can maybe point out to the two or three people closest to you, but anyone a few feet away from there, that pointing finger doesn’t mean anything,” he said.

Fazekas’s experience with national tours with National Geographic Live made him wonder if there wasn’t more he could do to explain and explore the night sky with larger groups of people. “And, my mind started wandering about what we could do with the night sky that would really engage the audience. What was the next level of communicating to the masses?” Fazekas said. “How could I take my enthusiasm of stage productions for large groups, and meld that with the night sky, the intimacy of guiding people through the night sky?”

Fontana approached Fazekas, explained his idea over lunch, and the two connected. “We ended up meeting for lunch, and he started talking, and I couldn’t believe what I was hearing because he is really touched a chord with the vision that I had. His vision was doing something of an outdoor planetarium, and then, I told him about the vision I had about audiences and what could we do with virtual reality and my background, and it just seemed like the perfect fit,” Fazekas said. “It was meant to be. The stars aligned. It was a natural fit. Both of our visions were so complementary. We came upon this idea that augmented reality was the way to go.”

Fazekas became an active part of Fontana’s project, writing the script and incorporating science and education into it. He thought on how to best package things, what the presenters – amateur astronomers – could best take advantage of the augmented reality technology, how AR could offer an enhanced educational, entertaining experience.

For Fazekas, writing a script for an augmented reality show was new. He’d written scripts for radio shows, lectures, animated talks, speeches, online explainer videos, but this was quite different. “This was something much more involved, but it was so much fun,” he said. “To me, being able to communicate the night sky, share the wonders of the night sky, is truly my lifetime passion.”

Augmented reality allowed Fazekas and Fontana to show the constellations, map the planets, show the International Space Station, GPS, telecommunication and military satellites, with explanatory text highlighting objects. AR offered them the opportunity to showcase things that would have normally been relegated to indoor planetarium experiences, and layer it onto the real night sky. AR allowed them to illustrate constellations, something that has only been done on hand-held devices or laptops.

“What people of all ages really enjoy, especially youngsters, are the mythological tales that are in the sky, the stories,” Fazekas explained. “It’s a true celestial soap opera that plays out in the night sky, all of the different traditional stories, the Greco-Roman mythology and Native-American mythology. We find that augmented reality technology allows us to paint those mythological creatures, to draw 17th century representations of heroes, heroines, queens, monsters, and transfer that into the sky and weave in the stories and science behind those pictures. A lot of research went into these stories and weaving in the science of the stars, planets and the night sky.”

Unlike indoor planetarium shows, where Fazekas noted that audiences watch passively, augmented reality engaged people in the science and the stories. “The AR, this experience, is the next level of being able to engage an audience. For me, this was such a fun experience, to really get into understanding what the technology is about and what it is capabilities are. This is a powerful new tool.”

Fazekas says the content of the show will change with the season, as the sky is dynamic. The mythology of the 88 constellations are set, and repeat each season. Planets and moons change position, and that will be updated monthly. “Locally, our script is constantly being updated,” Fontana explained. “Every day, we’re doing a little bit of research to see what’s cool and what’s going to fly by. The script is going to evolve.”

The augmented reality experience, called National Geographic ObservÉtoiles, allows guests to see digital renderings of the planets, stars and constellations, as well as shooting stars,  GPS satellites, telecoms and military satellites. “And as you move your head around, the GPS knows where you are, the accelerometer knows how fast you’re moving, the compass knows which direction you’re looking, so these constellations line up perfectly with the real stars,” Fontana explained.

The show begins with a 3D flight through the solar system. It is very intense and immersive and people are totally blown away, Fontana explained. Then, headsets are taken off, and an astronomer who helps to narrate the show, gives the audience anchors in the sky like Jupiter, to orient the guests. And after that, the headsets are put back on and the third part of the of the show resumes. “And then we do that for 35-40 minutes, taking people through the southern sky,” Fontana said. “The fun thing with the headset, if you look at your feet, you can see the constellations that are on the other side of the world.”

According to the Montreal Gazette, the show sold 2,200 tickets in its first month of operation alone. Tickets cost $45.99, and included in the ticket price is the headset. Guests can take it home with them, and are given a code to unlock the app, both of which otherwise are not available.

For Fazekas, after months of working on the concept and the script on an individual basis, the huge experience was the launch. “Being there, to see 180 people around me wearing the tech and seeing it come to reality, was an amazing experience,” he said. “I tested the technology with my family. But, to go to the planetarium and experience it with 180 other people, it was a visceral experience to actually feel that electricity that you get from these shows. It’s sort of like a rock concert and you feel the crowd’s anticipation.”

ObservEtoiles will be branded for the rest of the world as “Night Sky Odyssey,” and will be rolled out internationally in the future as part of a worldwide licensing deal with National Geographic.

Fontana’s plans include introducing the programme at locations already doing night sky interpretations, like national and state parks, lodges and cruise ships. “This has turned into a much bigger and cooler thing than I even planned,” Fontana said. “And the fun thing is, that it was developed in a funny little town on the back of a mountain in Quebec. This has never been done anywhere in the world, with a Dutch headset, an English app, American seats. Its really a genuinely brand new idea.”

Au Diable Vert was certified as a Dark Sky Preserve, the second private site in Canada to have the certification, in May.

How drones get impossible shots for Bonnier and National Geographic