For many magazine media publishers the progression to online vertical plays is a natural one: it is about content catering to specific groups of consumers, sectors or industries, with those niche or special interest audiences presenting strong advertiser appeal (as well as, on the basis of the strength of relationship, other opportunities to monetise).

Vertical audiences can measure from the thousands into multiple millions; size is determined by the potential of the particular market segment. The common theme, however, is that the quality of audience connections in a vertical – the depth of audience relationships – matter.

The vertical argument is not an argument against going for scale – who would argue against building massive audiences anyway? Rather, it is for publishers about knowing the strengths of their brands and understanding how and in which spaces they can best play.

There is a choice for publishers to make, according to Michael Friedenberg (pictured above), CEO at IDG Communications. “I think it’s a matter of what you want to accomplish and what your overall portfolio consists of. I think you’re either going to have to be a hyper horizontal or a hyper vertical in today’s media world, or you’re going to get really squeezed in the middle.”

Google and Facebook are examples of what Friedenberg calls “hyper-horizontal.”

IDG, for example, is a large vertical, “where we recognise we have a finite audience, but with that finite audience you can be very successful,” Friedenberg said. 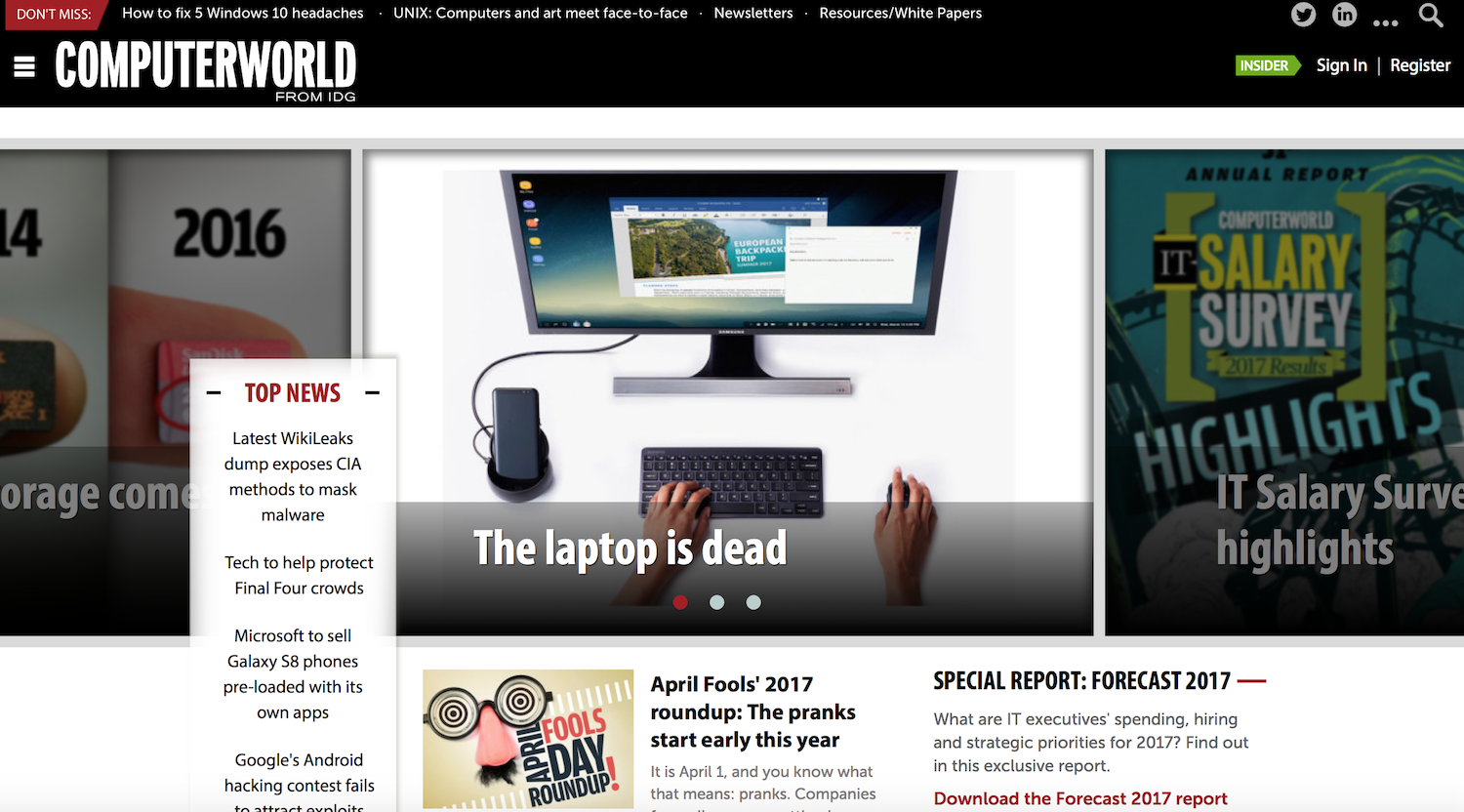 Above: One of IDG’s specialist titles, Computer World

Strengths of the vertical model include granular data and insight on specialised audiences, he said.

“In the vertical model, what you find very quickly, you have first-party data that gives tremendous insight into the intent of what those purchases are going to be,” he said. “So, from a hyper-vertical perspective, the ability to understand your first-party data, whether it be demographic  or contextual and to get much more scientific around the purchase process, is an incredible enabler to where business is going in media.”

One of the distinct disadvantages of being a vertical, is that there is only so much opportunity, Friedenberg explained, “because you have finite scale to your marketplace.”

“If you’re a tech media publisher, a very large vertical like IDG, we’re working with 200 million uniques every month, but that’s certainly not at the scale of what Google and Facebook are looking at,” Friedenberg said.

Friedenberg outlined some of his thoughts on magazine media business models in 2017 in a piece for MediaPost, echoing some of what he told FIPP. “”Unless you are one of the biggest names in the industry, highly-specialised verticals and niche publishers with a laser-like focus on their audiences have the best chance of survival,” he wrote in January.

By investing in niche digital brands, Bauer Media created new business propositions over the last number of years. In a piece for Journalism.co.uk earlier this year, Tim Pollard, editorial director for Bauer Media’s motoring and specialist digital portfolio wrote, “The biggest advertising wins are reserved for the select few at the top of the ratings lists, with slim pickings for smaller fry. And with the likes of Google and Facebook hoovering up ever more ad money, it’s hard work keeping the revenues rolling in.”

Bauer built business around highly-targeted niche audiences, by knowing who they were as a publisher and their mission statement, understanding their audience in digital spaces, hiring creatives, engaging with their audience on social platforms, and being prepared for meeting new demands in the future.

Another media organisation that reinvented its business model is About.com. “About.com is transitioning away from being all things to all people,” Kelly Liyakasa wrote on Adexchanger. In April 2016, it launched its first vertical, Verywell. A second and third vertical, The Balance, and Lifewire, were launched in the months following.

Related: Why a former internet giant looks at magazine media for inspiration

Into the future, verticals will most likely continue to experiment and develop value propositions and strategy. But, it’s those in the middle who may face the most challenge.

“I think what’s going to happen with the people in the middle, is that unfortunately their business models are going to be squeezed to a point where people are going to be able to buy around them,” Friedenberg said. “Either you have massive scale where you’re offering very affordable rates, or you have an advertiser who is looking to get very specific, whereas if you’re in the middle, you’re not going to be able to have the price competition or going to have the data, or a true understanding of that special interest market to align as closely as hyper-verticals.”

This may cause distinct differentiation in company strategy, Friedenberg said. Companies will have to decide if they’re sticking to being a vertical, or a horizontal. Media companies are consolidating, starting to move in centralising back office operations, standardising technology, and setting up sales organisations that are audiences versus brands. “The restructuring trend is now a result of what’s happening on the M&A front, as companies try to figure out if they’re hyper-horizontal or hyper-vertical.”

It’ll be a challenge for verticals, as they want to grow, but are limited by their audience scale, Friedenberg said. “So, how do you consolidate categories, or extend beyond your existing categories to get bigger? And that’s what’s going to be fascinating to watch on the hyper-vertical side.”

Why a former internet giant looks at magazine media for inspiration