This article is written by Magda Abu-Fadil, director at Media Unlimited, and was first published here. 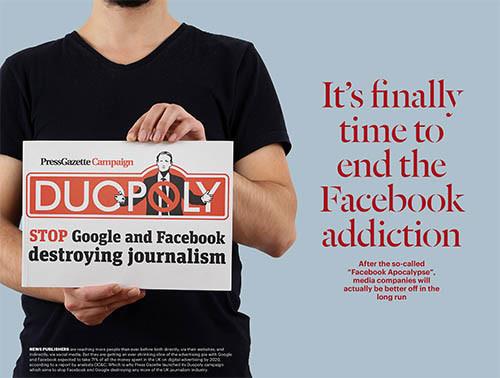 The reference was to news publishers reaping less advertising revenue through social media than from their websites last year.

What timing, coming on the heels of the Facebook/Cambridge Analytica debacle and how that social platform helped bring Donald Trump to the U.S. presidency.

Google is more the go-to place as publishers don’t make significant money on Facebook, the report said, quoting experts as saying the former was more reliable, that the latter platform’s “Instant Articles” were senseless, and that ultimately good journalism comes from hard working journalists at reliable media.

Here’s the catch, as stated in the report by Innovation Media and Consulting Group on behalf of FIPP, the network for global media:

Part of the problem might be how media companies see social media. “Our mistake has been to look at Facebook — and all social media for that matter — as another publishing channel,” wrote Publishing Executive Editor-in-Chief Denis Wilson on his own site. “We are good at building audiences and so we do the same thing on social media. We’re obsessed with how many people follow our page and what the organic reach and engagement is with each post. 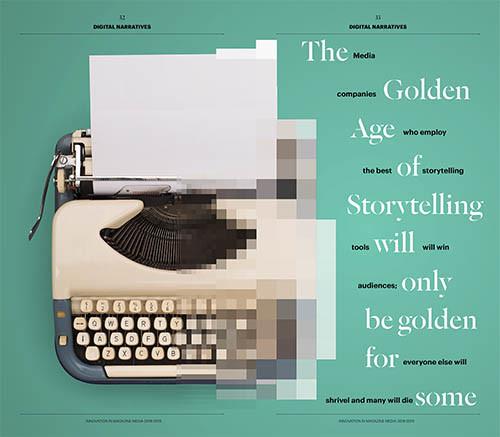 The golden age of storytelling

The report’s authors argue this is the golden age of journalism, though not for everyone.

It lists seven top digital narrative platforms or approaches – audio, automated or robotic journalism, chatbots, horizontal stories, interactive storytelling, live-streamed video and multimedia storytelling – but cautions against being too enamored of technology to tell the story.

Media companies not only have to master new storytelling tools, but they must also blow up their old cultures to create fertile ground for making the most of the new tools. Without an innovative culture, all the skills in the world won’t matter.

That shouldn’t, however, scare them off automated journalism. News organizations have been using it for several years to great effect, and freeing up journalists from mundane chores to focus on more substantive facets of news gathering and reporting.

According to media entrepreneur and consultant Wolfgang Zehrt, “robo journalism” is attractive because of its precision – unless the system breaks down, of course – and capacity to produce “a potentially limitless number of stories” that can be churned out 24/7 year-round in all languages

“If you invest in automated content, you’re then halfway to chatbots and automated video and audio services — in other words, paid services,” he said, adding that stories can be personalized.

Needless to say, it cuts down on the budget for personnel (1-5% of human costs), who can then focus on analysis, interviews, and background research, some of which isn’t published but used as data analysis and drafts, he said.

Chatbots – those increasingly ubiquitous interactive computer programs that conduct conversations with users under various guises like banking, travel reservations, consumer questions and healthcare – are being integrated with messaging applications to increase interaction, boost subscriptions and help with marketing for media companies.

A case in point is The Times of India that in the fall of 2017 launched a chatbot as a virtual personal assistant service enabling users to set reminders, book taxis, recharge their mobiles, book flights, do web check-ins, and make to-do lists among other things, the report said.

Conde Nast’s Vogue magazine teamed up with Google Home, a voice-activated home speaker system that lets its users ask questions verbally. Readers in the U.S. of Vogue’s 125th Anniversary edition in September 2017 who had a Google Home device could ask it for more information on any one of five articles. All the reader had to do was say something like “Hey Google, ask Vogue to tell me more about Jennifer Lawrence.” Instantly, Google Home would start talking about the cover story interview with the actress.

An interesting example of reverse engineering is the iconic Reader’s Digest magazine, once a fixture in many homes worldwide in countless language editions, that repurposed and grouped its best digital health content into a special print issue, the “Ultimate Health Guide.”

That’s one way of reaching readers across different age categories as they consume content in print, online, and via mobile devices while debunking rumors that print is dead, or on the outs.

So, what makes for a successful 21st century print publication?

In a nutshell, print media success hinges on five elements:

“Without it, everything else will soon be pointless. All the cool stuff in this book will be impossible in the not-too-distant future without reader revenue,” they wrote.

Magda Abu-Fadil, who brings years of experience as a foreign correspondent and editor with international news organisations such as Agence France-Presse and United Press International, is director of Media Unlimited. She headed the Journalism Training Programme at the American University of Beirut, which she founded. She wrote for Arab dailies Asharq Al-Awsat and Al Riyadh, Washington-based Defense News, was Washington bureau chief of Events magazine, and was Washington correspondent for London-based The Middle East magazine. Abu-Fadil served as director of the Institute for Professional Journalists at the Lebanese American University. She taught journalism at her alma mater, American University in Washington, D.C. She conducts seminars and workshops in English, Arabic and French for professional journalists across the Arab world, collaborates with international organisations on media projects, safety for journalists, consults on media education and media literacy programmes, speaks regularly at international conferences, publishes extensively on media issues, journalism education, and training, and, blogged for HuffPost for 10 years.