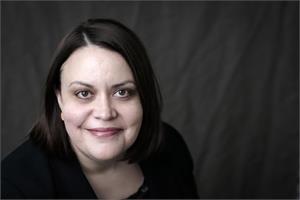 Over the last year, the team at the Harvard Business Review have been experimenting with what community means for the publication and exploring different ways they can engage with their audience, their subscribers and their readers.

“We knew that the more frequently that people interacted with us across multiple platforms, the more likely they were to subscribe or to register on the site, which also supported our business goals,” according to Maureen Hoch, senior editor at HBR.

The idea for a Slack bot that offered work advice for audiences came from a strategic place - the HBR team was already using it for internal office communication - and understood that messaging platforms were becoming important to, and had a lot of potential for the publishing industry.

“Slack was becoming more and more part of workdays around the world,” Hoch explained. “We wanted to first experiment in a controlled environment like Slack, where we knew people were using it at work, that was right in our wheelhouse. That was one of our goals.”

Those things made a pretty compelling argument for a pilot bot project.

“There are different ways that conversational interfaces are going to be valuable for people, and we wanted to know what kind of response people would have, we wanted to hear from our audience directly, whether this was going to be a useful platform for us,” she said.

There were a lot of unknowns surrounding the project, Hoch explained. “Would they want to get content from us in this environment? Did they subscribe? Would they stay subscribed? Would they engage? Would we hear from them? What kind of feedback would we get?”

A Slack bot would be a new way for audiences to engage with HBR content, but there was also the opportunity to reach a new audience through Slack that the publication hadn’t engaged with before.

The HBR bot for Slack was launched in September 2016, after five months of solid work on it. Five people worked on the bot internally at HBR, and a small team at Boston web development firm Vermonster helped.

The HBR Slack bot disseminates approximately 200 pieces of ‘Best Practice’ content delivered inside Slack. The Best Practice series focuses on challenges that people face at work in different work environments, and includes stories like What to do if you’re smarter than your boss and Stop second-guessing your decisions at work. Hoch said they realised they could take the content and turn it into a database that could be delivered on a bot.

“The thing about these pieces is that they were already written in such a way that there were discrete sections,” Hoch explained. “If you look at a Best Practice article, there was a familiar pattern to each piece, there was a problem, an experts section, a case study, there are do’s and don’ts.”

The format of the content made it an interesting data challenge for the team, to turn it into something a bot delivers. 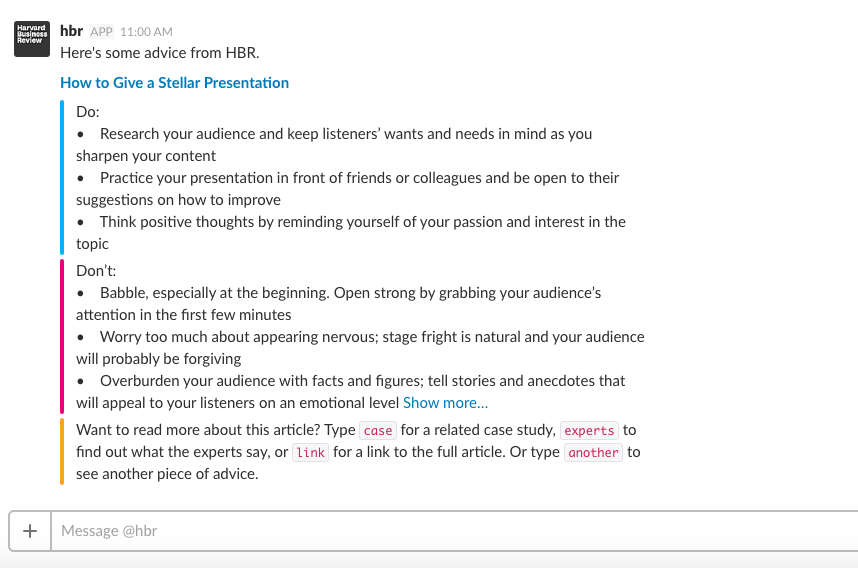 Hoch said they hoped people would like getting practical content delivered once a day, or once a week, and find the bot useful.

So far, that hypothesis has been proved true.

The bot experiment gave the HBR team certain insight into their audience, but they are still unpacking and figuring out who the market for this platform is. “Something we’re still trying to establish is, are these people already engaged with us, how many are totally new to HBR content,” Hoch said.

One of the insights Hoch and her team have discovered since the launch of the Slack bot was that it’s fiercely popular among those who’ve engaged with it. “We had about 175-200 pieces of content, and we thought it would take a long time for people to get through that many,” she said. “As early as December, we were seeing people starting to exhaust the content that was available.”

It was a surprise to HBR, because they thought it would take longer for people to absorb the content. Hoch saw it was a great sign, encouraging even, that people wanted more.

“We’ve definitely learned a lot about what it requires to run something like this, but the team has done a really good job of keeping expectations realistic,” Hoch said. “Every time we do one of these, we learn something new about what people want, how much they are going to engage.”

***Get stories such as this in your inbox with our weekly FIPP World newsletter. Subscribe to FIPP World here***

HBR has also used Slack recently for their Big Idea platform. The Big Idea is an important idea that they want their readers to spend more time with.

The Big Idea is HBR feature articles re-imagined for digital, according to senior editor Scott Berinato. “We try to help users understand the biggest, most important management issues, presented by leading voices and thinkers. We take on a topic from multiple angles and with multiple storytelling techniques, from video, to interactive, to audio, to events both live and virtual, to good old-fashioned text,” he said. “By releasing it over time, we don't overwhelm the audience with everything at once, and we can also build the audience over the course of the week. They appreciate the daily dose on a topic they want to understand. "

It’s a way for HBR to experiment with a new way of presenting a feature that not only includes a feature article, but also rolls out other elements including an email newsletter, a self-diagnostic assessment, video, audio, turning it into a multi-platform experience.

The last Big Idea article was written by Stanford economics professor Nicholas Bloom, who looked into how inequality played out in the corporate world.

Bot to the future

For publishers looking to get into messaging platforms and bots, Hoch suggests to listen to users and start simple.

“Your initial ideas about what somebody wants in this messaging platform may not be what users are actually looking for, so take the time to listen to them,” she said. “It's so easy to start thinking about all of the potential, but I really believe in the advice to start simple, build something that you feel proud of, that works well, that you can start getting users engaged with, and then you're going to learn a lot more about how to build it out from there.”