“Forbes has long been associated with the best in business, investing, technology, entrepreneurship, leadership, and lifestyle,” said Kelly Erb, senior editor, Forbes Media. “We’re continuing that tradition with Bankable by using technology and social media to share great content across a number of platforms, including mobile and video. As the Forbes audience expands, we’re responding by providing content that’s useful and accessible. That’s why we’re launching Bankable at the Forbes Under 30 Summit in Boston: It underscores our belief that you can achieve financial, career, and lifestyle goals at any age.”

While Bankable was launched at Forbes’ Under 30 Summit, the sub-brand isn’t aimed specifically at millennials. There are a lot of people who are in different age brackets who are interested in and benefit from Forbes’ content, according to Erb. “The kind of content that we’re offering appeals to a lot of different ages and stages in life,” she said. “There’s a lot of job and money insecurity right now in the US and abroad as well. From a career and finance perspective, there are the beginner ‘how to’ sites and there’s the sophisticated investor sites, and then there’s a lot of people in the middle that are trying to figure it all out.”

Those in the middle are the target audience for Bankable.

“There are a lot of professionals out there in their 40’s and 50’s who are still struggling with student debt and trying to figure out, even if they paid it off, how to avoid it for their kids because they’re in that same boat,” she said. “There’s a much broader appeal for Bankable’s content than just people straight out of college.”

Bankable isn’t a new Forbes Media content pillar, nor would Erb define it as a vertical. “We don’t call it either,” she explained. “It’s not just an extra channel. It’s almost like a sub-brand, because we’re also launching it across multiple different channels.”

Erb said they’ve been referring to Bankable as an initiative, because it is something new and different for Forbes.

Erb said they’re looking to see where their audience wants to consume content and how they want to consume content. “We’re trying to appeal to our audience in different ways, understanding that a lot of people today are getting their content on mobile. Not everybody accesses content the same way, so, we’re trying to not just present it in different ways, but produce different content for each channel,” she explained.

Platforms that will host Bankable content include newsletter, mobile stream, Facebook, LinkedIn, Forbes.com, Webinar, Amazon Alexa, Google Home and a podcast (slated for 2018). Bankable’s content strategy uses each of the platforms it has chosen to be on, in different ways. Bankable’s newsletter will be produced twice a week and concentrate on a curated handful of stories, which will differ from it’s LinkedIn presence, where it hosts a monthly webinar series. Bankable’s content on Alexa and Google Home will be where they sum up tips and stories in one-minute bites each day, so it’s not the same content found anywhere else. There is a Bankable mobile stream where people can consume stories in easily digestible bites, and the Bankable home base will always have stories from new or existing writers, offering new content, Erb said. 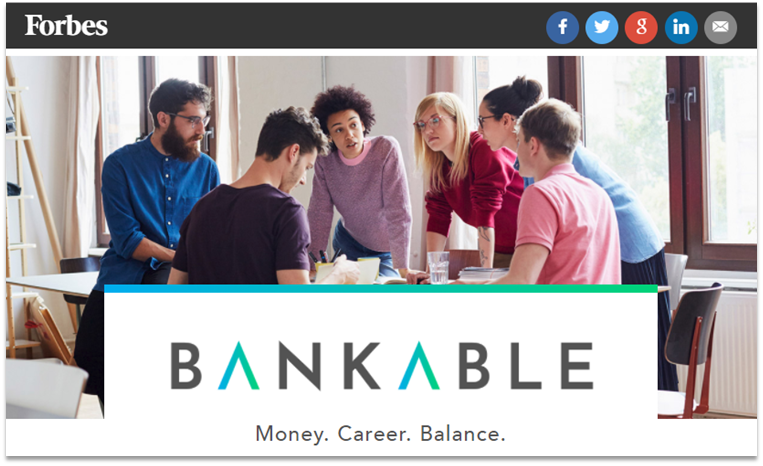 Forbes sees two different audiences. In print, their audience is older and looks at retirement and investment strategy, Erb said. On the web, they have a younger audience who are looking for quick answers. Bankable helps bridge that audience gap, helping existing audience members get where they need to be.

“We thought a lot about this in the beginning, and as we were thinking about it, we didn’t want it to be an add-on, right? So, I think of it kind of like a transition,” Erb explained. “I think one of the ways Bankable is fitting in, is that it helps existing readers in transition, and keeps them engaged. It’s an understanding that not everybody is starting at the same place, and not everybody wants to be at the same place, because not everybody wants to retire at 45 and not everybody has goals to be a millionaire. Because sometimes people just want a good, solid career.”

Success, Erb notes, is something very personal to each of their individual audience members, and Bankable aims to help them get there. “There are lots of different ways people define success, and I think where we fit in, is we understand that there is not one way to achieve success,” she said.

For publishers venturing into the blurry grey areas between vertical and initiative like Forbes Media has, it’s important to note that their initiative was created to meet an identified need of Forbes’ audience. “We originally thought of Bankable as a brand, and a lot of what ended up coming out of this was very organic,” Erb said. “It was the story we wanted to tell, it wasn’t just telling people how to file their taxes, or get a 401K. It’s a bigger platform to talk about the very real things that people encounter.”

Bankable developed from listening not only to their audience, but to other people who had great ideas on the team, Erb explained. “If you want to do something well, I think you need to learn to be responsive to your audience and your team. When you’re so focused on end results, you tune them out. I’m glad we didn’t do that. We let it develop organically.”

Erb suggested for other publishers looking to create in similar areas, that the key is to be flexible and responsive to their audience. “When we first started talking about it, one of the things I felt very strongly about was that we had to broaden our focus,” she explained. “As we started talking about the money, and the career pillars, is that we were missing the lifestyle piece, the balance piece everyone could relate to.”