For those with an interest in media who follow the French presidential election online, there are two reasons to feel special. For starters, it is the first election where opposing media groups collectively work together to combat fake news through a programme called CrossCheck (read our story here), and secondly, they are witnessing digital innovation in political reporting as never seen before.

Snapchat threw down the gauntlet early by starting to create political content in the run-up to the election on their Discover platform. They gave their eight million French viewers the chance to submit ten to 15 second video questions to presidential candidates, posting ten second answers from the candidates to a selection of best questions in five-minute videos.

France’s most widely read news weekly, Paris Match, was not to be outdone. They viewed the Snapchat Discover platform as an ally and started to post a large variety of curated stories on Discover, many of which were designed to increase discovery of their online digital content at parismatch.com via mobile.

Marion Mertens (photo), digital editor, says the current election is the first political event that truly presented Paris Match with an opportunity to experiment with a variety of new digital formats (see all their election coverage here). Despite the work they put into the usual suspects such as Facebook and Twitter, working with Snapchat threw exciting challenges their way. Among others, they came up with Snapchat Discover videos exploring:

They soon realised, says Mertens, that social media also presented them with a great opportunity to, at times, put the seriousness of political coverage on the back burner. They started with deliberate efforts to poke fun at certain aspects of electioneering and it proved a hit with readers. She references a feature about Emmanuel Macron being ‘the clone of French polymath and writer Boris Vian (1920-1959)’ and a feature creating parody posters inspired by real election posters.

However, says Mertens, digital platforms also lend themselves well to analysis and deep dives into election data. To create even more interest in election details and statistics, they started to run features in which election rhetoric was analysed. The most popular of these ran in the week prior to the election (French voters went to the poll in the first round of the elections on 23 April) when they examined how many times and in which context each candidate used the word “jeune or jeunesse” (young or youth) during electioneering.

In order to have accurate statistics about each key word used during the campaign, the data journalism team at Paris Match created an interactive database of political speeches and an interactive online tool called ‘Le poids des mots’ (The weight of words).

“Le poids des mots was not only conceptualised by our data team, they also developed it. It is the first time in France that political speech analysis of such scope has been conducted during, and not after, the election process.” 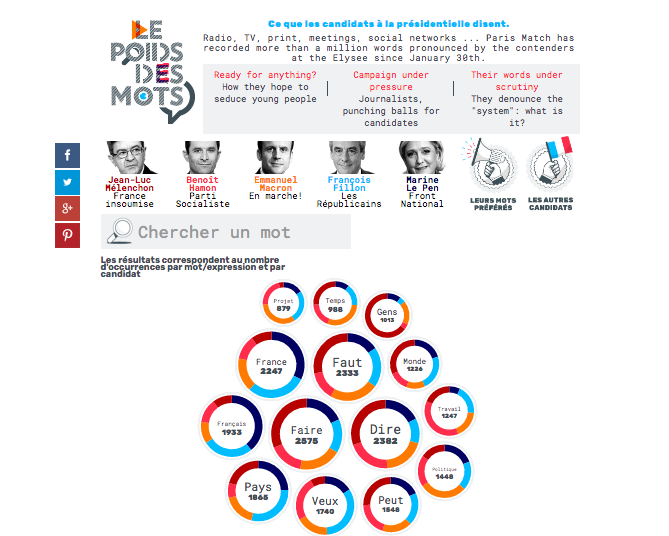 Mertens says the tool offers the possibility of creating interesting story ideas, like ‘what are the five words most used by each candidate?’ or ‘which five words were most used during electioneering?’

The fact that the tool is interactive created huge amounts of online traffic. “Through the ‘Le Poids des Mots’ page on our website, readers enter any word among the more than 800,000 that have been identified to discover how they have been used and by whom. The database will continue to be updated throughout the campaign and until the second round of this presidential election, with special ‘live’ editions during the presidential debates.”

To visualise word use, the data team also created doughnut charts for online users to ‘see’ which words candidates use. One chart, for example, visualises how ‘right’ and ‘far right’ candidates tend to use the word ‘France’ more frequently than others. To provide context to the word statistics, readers can click on a chart, which will reveal a pop-up window. The pop-up then provides them with specifics about the context of each specific speech word, such as if it was said during a campaign, television, radio or print interview.

The Paris Match data team used a speech-to-text app to capture transcripts provided from hours of footage. They then worked closely with Google News Lab and used Google Trends data to match political speeches with search interest. This, as another example, revealed that when two candidates spoke about the Burqa controversy, it resulted in a search spike. “This provided evidence of the public’s reaction to certain political speeches,” says Mertens.

Now Axel Springer-owned American news website Business Insider has developed experience in covering business and politics since being founded in 2009. Its French franchise, Business Insider France, has only been in operation for six months. Founding editor Marie-Catherine Beuth says they used a lot of the coverage experience acquired during the US election by American colleagues to build a foundation for their coverage of the French election.

“But we chose to dig deeper into topics that speak to our readership, who are mostly next generation leaders under 35, and are not so much covered by other French media.”

One example she mentions is the decision to find and write up features about people under 30 working behind the scenes for the presidential candidates, or on their campaigns. “Because it spoke of and directly to our core readers, this piece gained a lot of traction on social media.”

Publisher business models in the age of platforms

Hoaxes, myths and lies: a driving force for a more collaborative media?