The report is compiled by FIPP and contributions from industry experts include ZenithOptimedia, PwC and regional and local associations, publishers and agencies. It also includes the FIPP monitor of cross-border launches. Data and analyses are reported country-by-country, regionally and globally.

Emerging economies such as China, India, Russia and South Africa will see the fastest growth in B2B magazines. As businesses in all types of economies look to grow and increase market share, both advertisers and readers will find their way towards B2B magazines and therefore increase total revenue. 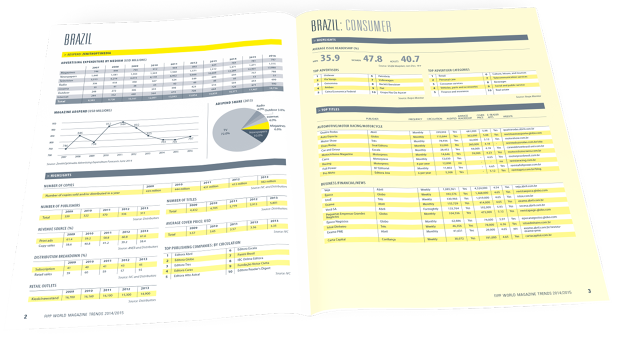 More on the Trends toolkit.

FIPP World Magazine Trends 2014-15 is available now in print and digital formats with the Excel edition (raw data) to be published in early January 2015.

Members can login free to the digital edition, powered by PressReader. If you don’t have passwords, please contact Sylkia J. Cartagena at FIPP.