The event also unveiled premium programming from Cosmopolitan, Delish Elle and Esquire, as well as collaborations with actress and activist America Ferrera, star of the hit show Blackish Yara Shahidi, and director and stylist Carine Roitfeld. 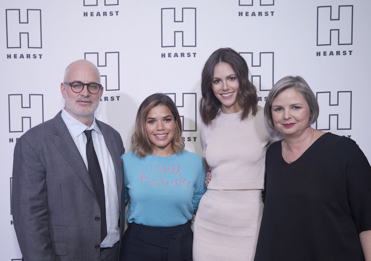 Guests were immersed in interactive video experiences created around four main pillars – food, beauty, fashion and men’s lifestyle. The presentation highlighted the scale of Hearst’s digital audience across its portfolio of 22 digital brands, and underscored the company’s leadership position in beauty and fashion. It also spotlighted Hearst’s continued success expanding to social platforms, including Snapchat; with six separate channels on Discover – Cosmopolitan, Harper’s Bazaar, Esquire, Popular Mechanics, Road & Track and Sweet – Hearst is the largest publisher on the platform today.

• A multi-platform content partnership – including an original docu-series across Cosmopolitan, Elle and Marie Claire recognising ordinary women doing extraordinary things – with America Ferrera, co-founder of Harness, to encourage activism and celebrate a new class of role models who are changing their communities and our country.

• An original video series from Cosmopolitan with Yara Shahidi, “Keep Calm & Yara On.” Launching this fall on Cosmo’s Snapchat Discover channel, the 10-episode collaboration will offer a fun, uplifting, and relatable take on the growing self-care trend.

• Delish editor Joanna Saltz previewed Delish Kids, an online destination featuring videos, how-tos and recipes made by kids for kids. Saltz also announced DelishTV, the brand’s first foray into television as it sets out to create the world’s first viral food show. The new show will debut on A+E Network’s FYI brand in 2017.

• Kate Lewis, SVP and editorial director, HMDM, announced Glo, a new video-first millennial media brand that will debut in September and bring an irreverent and entertaining approach to health and wellness.

• A partnership with musical.ly will kick off this summer with a slate of original video series about beauty and fashion from Seventeen.

• A publishing partnership with visionary fashion director Carine Roitfeld, whose namesake brand, CR Fashion Book, will launch on the Hearst platform this month. 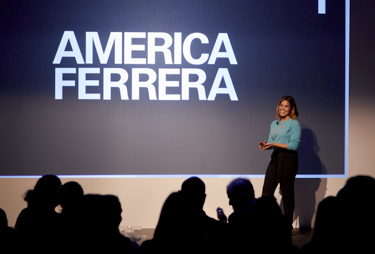 America Ferrera, co-founder of Harness, on stage at Hearst Magazines Digital Media’s 2017 NewFront presentation at Skylight Modern in New York on May 3

“Across our portfolio, we produce, package and distribute 500 pieces of content each day,” said Troy Young, president of Hearst Magazines Digital Media. “We do it with one goal: to make people feel. While we can brag that last month we delivered more than 1.5 billion video views, the most important thing to us is not the view count, but the viewers. Everything we do is with them in mind.”

“Our presentation is experiential this year to highlight the enormous amount of dynamic video content we produce across our brands,” said Lee Sosin, SVP, Hearst Magazines Digital Media. “The installations showcase how seamlessly our branded content fits with our editorial, because we are obsessed with quality and serving our audience.”

“What excites me most is the sheer breadth of what we’re doing and the variety of platforms we’re doing it on,” said Lewis. “So many platforms, so many different kinds of media, so many great collaborators, so many distinct brand voices. Our content team continues to innovate so we can be with our audience everywhere.”

“We have experienced incredible growth since our last NewFront,” said Todd Haskell, SVP and chief revenue officer, HMDM. “The volume and depth of content that we create is resonating with our audience at an astounding rate. We look forward to collaborating with our marketing partners to create the high-quality, customised, memorable experiences that connect their brands with our readers.”