Canadian publication The Walrus is using video in intricate ways to supplement its content strategy, support its events and increase reach and revenue.

The Walrus is a national general interest magazine about Canada and its place in the world, published 10 times a year by the charitable, non-profit Walrus Foundation. Launched in 2003, in addition to publishing a print, tablet and mobile edition and daily website content, it curates a national series of talks across the country each year. 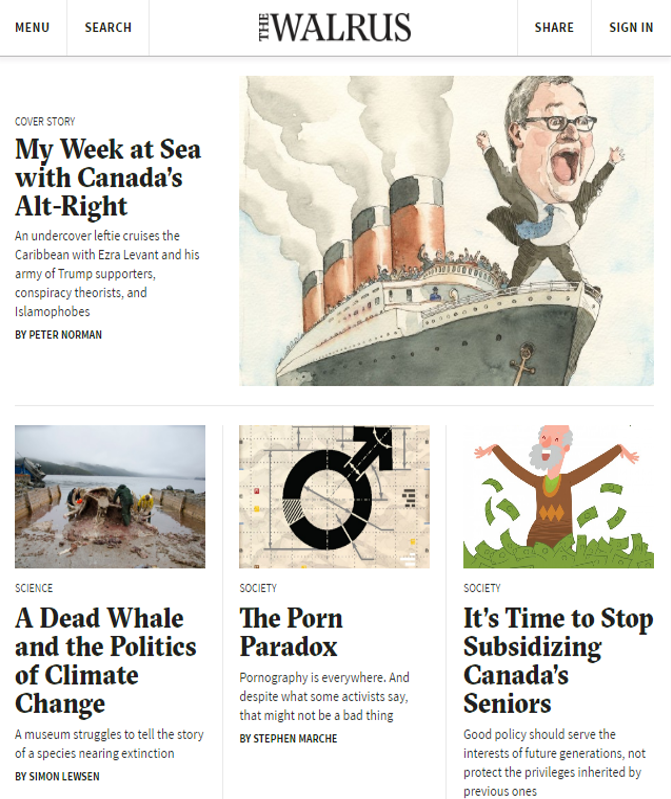 “An event is a great opportunity for new voices, but it’s also a very physical presence in a city,” explained David Leonard, events director for The Walrus. “There is something powerful about having the brand have a physical event in a space people can go to. And, what we found is that people across the country really connected with us.”

The Walrus Talks aim to get really smart content about Canada in front of as many people as they possibly can, Leonard said.  “Anyone who has interesting ideas about the big ideas facing the future of the country, whether they be young or old, these are people who are on our stages and I think that’s something we can be really proud of.”

And, far from focusing purely on current events and Canadiana, The Walrus Talks focus on big social and economic issues facing Canada’s future. Past topics have included resilience and health of cities, bringing communities to life via art and culture, aboriginal life and culture, water, transportation and mobility, the energy economy, entrepreneurship and innovation, issues of the Arctic, social innovation and other topics. The publication started these cross-country talks in 2012, and have hosted approximately 70 talks since then.

Most recently, The Walrus kicked off a special national tour called “Conversations About Canada,” in celebration of the 150th anniversary of Canadian confederation: a series of 13 talks from March 1 to May 31, 2017, in some interesting and unique venues in 13 Canadian provinces and territories including a Via Rail train, a naval ship in Halifax Harbour and a national park.

The Walrus’s events have become a way to produce content that augments their print and digital stories, their voices, and perspectives across the platforms their audiences live on. They record each of the talks on video, atomise the content and share it across platforms. 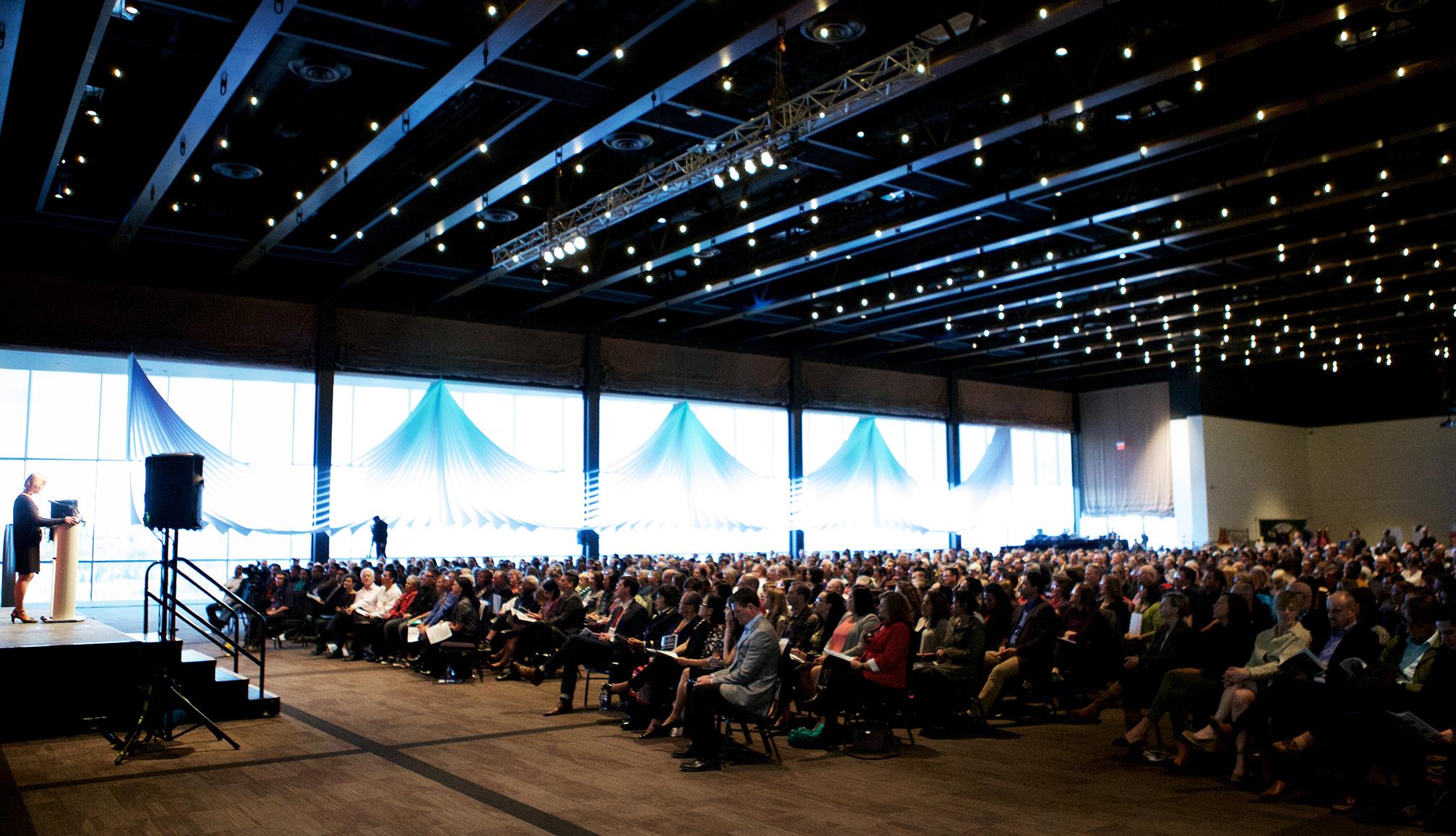 “We realised that with the talks, we were producing great content and that there was a way to extend the events through filming and producing videos and sharing them online,” said Cody Gault, digital director at The Walrus.

The video content became a tool for The Walrus on various levels:

1. To create future talks with evidence of what they’d done before

2. To enable their audience (who mightn’t have been able to get tickets) to follow along with a livestream, and

3. To create video content for various platforms, engaging people who may not read the magazine but like to watch video.

“Sometimes the talks can be re-purposed into web pieces, and then sometimes those talks or those speakers end up getting into the magazine in other ways,” Gault explained. “We’re able to reach people wherever they may be.”

“There are people who are more likely to watch a video than they are to read an article, but they’re still interested in the kinds of things that we do,” he said. “So, the videos give us an opportunity to reach Canadians who are interested in the Canadian conversation but who might not otherwise read The Walrus magazine.”

Each of the event videos is split into seven or eight pieces, depending on the number of speakers at the function. Gault says The Walrus has more than 300 pieces of video content from the Walrus Talks in recent years.

The biggest challenge, Gault said, is transferring medium to medium.

“We’ve been working on figuring out how we can take an excellent live show and turn it into an excellent video, because the rules are slightly different,” he said. “Part of that are simple things like camera angle and lighting (which matter less when you’re in the room than when you’re watching), about also larger issues in terms of positioning content and figuring out how to articulate a value proposition to watch the video.”

The success of adding video to their content strategy isn’t definitive, yet. As Gault explained, it’s still in an embryonic stage. “We don’t have the institutional history of being a video production company, and there are very specific skills for that medium, so we are still trying to find our footing and figuring out how we can make use of this collection of content.”

It’s an iterative process, Leonard explained. “You start to see what audiences respond to. The way the videos look or feel, or are presented, that’s the stuff that iterates, and we are getting better at it.”

The talks in themselves have been a roaring success in the meantime. Leonard said the events have been successful financially, they increase audience reach and recognition and fulfill the Walrus Foundation’s educational mandate.

“We were set up in way by our founders to be able to think about revenue in a different way than a lot of other traditional print publications,” Leonard said. “Frankly, that’s why the events were ramped up in 2009, to give us more reach, but there is also a significant source of revenue there.”

The events are lucrative, which allows The Walrus to thrive in a difficult market. The combination of the astute brand and its track record of popular events – with some of the most well-known names in Canada, Leonard adds – is attractive to sponsors.

The events expand and support the reach of The Walrus as a national brand, and allow it to present a broader range of speakers, and thus conversation, to its audience. “When you look at the voices The Walrus can present, the magazine is ultimately a finite product. There is only so much you can put in a print magazine in the course of a year, which means you are limited in the number of voices you can present,” Leonard said.

For publishers looking take inspiration from The Walrus, everything you do should speak directly to the magazine’s mandate or brand, Leonard suggests. “The Walrus is committed to being smart and thoughtful about the big issues with interesting voices, so, everything we do has to tick all of the boxes. And if it doesn’t — there are some events, ideas that come to us that we say no to — that’s because it doesn’t jive with what we’re trying to do.