Deforestation rightfully receives a lot of attention for its links to climate change and biodiversity loss, and it was the topic of one of the most optimistic deals struck early on at the recent COP26 climate summit in Glasgow. Yet contrary to what one might believe, given the ubiquity of paper products, cutting down trees for this purpose isn’t a big part of the problem and can even help alleviate it, as discussed by UPM at a recent webinar.

Sustainability has also become a hot-button issue for the magazine media industry at large, as readers become more aware of climate change, waste and how materials are sourced.

The historical context is important. Drawing on research from two reports published in 2020 – the UN’s State of the World’s Forests and Forest Europe’s State of Europe’s Forests – Eichiner explained that the 20th century was the century of forest loss, with a peak of tropical forest loss in the 1980s.

Once people realised what was happening, global outcry followed, and limits were put in place by some national governments.

“In the last 30 years, every year the loss is actually decreasing – in the temperate regions of the world, we have already a net gain of forest growth,” said Eichiner.

In Europe, forest cover has actually expanded by nine per cent in the last 30 years. “That means trees are bigger and more plentiful across the continent,” added Eichiner.

“Yet, how do we reconcile this with the fact that forests are suffering – from drought, storms, and insect calamities? People are fearful about the health of forests for good reason.”

However, it is not overharvesting that is making Europe’s forests suffer. Both the UN and Forest Europe reports conclude that, although they have in the past contributed to the degradation of some forests, pulp- and paper-making are not drivers of deforestation.

One thing foresters understand is the role of forests as “carbon sinks”. “Forests can function as both a renewable energy source and as carbon sinks to help us keep below 1.5 degrees C. They do this by storing up carbon that is released into the atmosphere.

“So how do trees store carbon? Put simply, they absorb it and turn it into sugars, which they store. Forests are always carbon stores, but not always carbon sinks – the former being when the forests decay and old trees enter an exchange with the atmosphere, where they die and release carbon again.” 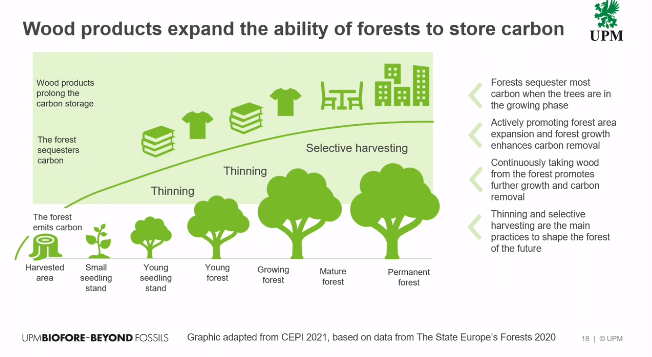 Trees naturally grow and fight for light, and many will not survive in a busy forest as they get crowded out by other, stronger plants. A forester “thins” forests in a healthy way and selectively chops down trees which can then be used for beams, tinder and paper, explained Eichiner.

For example, a forester might take out conifers and leave behind old, tough oak trees which are more drought-resistant – making the forest more resilient to a drier, warmer climate.

“Other trees are then left behind with more space to grow. A forester knows how to shape forests selectively,” she added. “If there’s no thinning, these trees will die anyway.”

Ensuring that biodiversity and forestry go hand in hand is another way of future-proofing forests, explained Sawyer Scherer, Forest Ecologist, UPM Blandin Minnesota. “Some of the trees like oak are more adapted to a drier future, but we also care a lot more these days about diversity of tree types in a forest. Maintaining and increasing variety is one of the primary methods to fight climate change,” he explained. 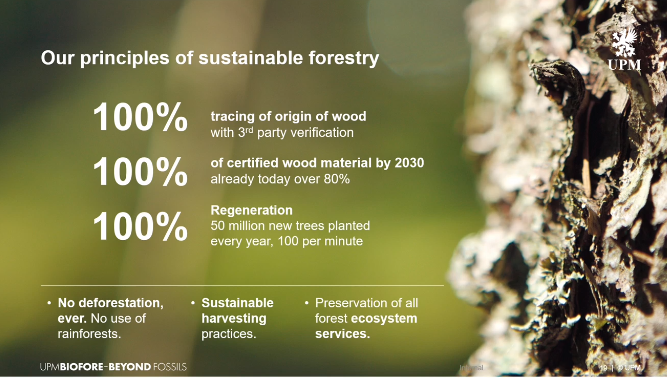 You can watch the webinar in full here.