With her many years of experience in journalism the career of Marion Mertens, digital editor in chief at Paris Match has spanned the transition from “an old world of publishing into the new”. In the old world, Mertens told delegates to this year’s FIPP Insider Paris, “you got your news from a newspaper and phones were phones, they were not smart”. In the new world phones are smart, content gets consumed from it and even her 14-year old daughter can now act as her consultant.

Mertens, who is in charge of developing storytelling on other platforms than print, explained that it did not take them long to grasp that their approach to social media needed to differ from platform to platform. “We use Twitter for people in the field to share information as it is happening. Facebook we use for live stories like a live feed before a music concert or fashion show. On Instagram, we share our best images while collecting news on our main account.” They have also created a Instagram account called Paris Match Vintage to share images from their archives, Paris Match Celebrity to share images of celebrities and Paris Match Planet to share images related to the environment.

Despite all of these initiatives successfully finding reach and adding to content discovery, the ‘baby’ that has delivered the most telling results was via Snapchat Discover, a redesigned area within the Snapchat mobile app where the platform combines the best of social networks, publishers and television.

Paris Match decided to team up with Snapchat over two years ago when Snapchat suggested they create daily Snapchat ‘editions’ on the Discover platform. Mertens admitted that the initiative was controversial at the time. “People were saying: ‘Paris Match, the old French institution teaming up with Snapchat, the young Californian kid? How is that going to work?’ ”

But the moment they sat down with the Snapchat team they soon realised that they had the same visual culture, explained Mertens. She “grabbed talented people” from the art department and photo department who were keen to work on a new platform. The new Snapchat task team would be responsible to create ten Snapchat Discover stories every day, seven days a week.

Despite the obvious differences between a legacy print magazine and an ultra modern social platform, the fundamentals were not that different, said Mertens. “When we started out, there were 8 million young people on Snapchat every day. So we started with an existing audience and our only job was to bring content to them. That’s like a newsstand. You need to put the best possible cover on a newsstand. As publishers we were familiar with this.”

The team realised they had to be visually innovative. “But the storytelling we also knew would need to be what Paris Match has always done, a healthy mix of magic and weird stories that we have done for 70 year across hot news, celebrities, politics, sport, environment and lifestyle in one edition. But making this work on a new platform.” 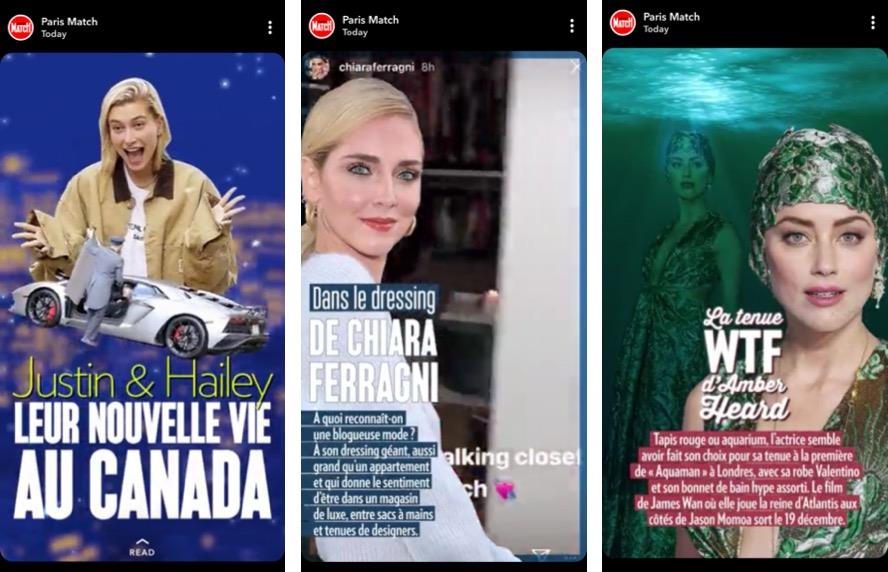 The team has come up with various approaches to tell stories through images, short videos and graphics, each video takes only eight seconds to consume but when the user swipes up, a text story with more images can also be consumed. Some of the short videos were shot on mobile by reporters on assignment or some are thoughtfully produced as a series of videos dealing with one issue. She referenced a series done about protests in favour of gun control in the US or animals that are endangered.

One story they produced for Discover about drug mules had an engagement of more than one million users, giving an original print story an entirely new lease on life.

“The reason why we are one of the top brands on Snapchat, despite being legacy media, is because we built the stories in the same way we would do it for the print magazine. We ensure that our storytelling makes sense. Content and storytelling needs to be really strong. Not everyone knows how to tell a story. And it is actually what the youngsters on Snapchat want. We are not telling stories like teenagers. Good storytelling is multi-generational. It is what everybody wants.”

Mertens said their success has also opened up new revenue opportunities. “Our success on Snapchat brought home a new way of working with advertisers. Similar to a print magazine, you can choose where you want to put your adverts. So, you can work with a brand to create opportunities because we can place an advert snap after every three content snap pages. It gives the sales team another platform to work with.”

She admitted that monetisation was initially “a big challenge” but after six months they were able to break even on what they had invested in Snapchat Discover.