Andreas will be one of our speakers at the 41st FIPP World Congress, taking place from 9-11 October 2017 at the iconic Tobacco Dock in London, near the Tower of London. Learn more at fippcongress.com. Click here to book your place.

Can you give me a sense of where Schibsted started as a company and what it looks like now?

The Schibsted Company history all started as a printing house back in 1839. The newspaper Aftenposten, was established 157 years ago and still runs strong today.

Early on, the focus of the business was mainly on publishing books and newspapers. Now, we have the two largest newspapers in Norway, the tabloid VG and the significant Aftenposten, which is a bit more like New York Times of Norway. The company also owns the major newspapers in three major regions of Norway and two major newspapers in Sweden. The geography of Norway make papers quite regional in their focus, because the fjords and mountains between different regions give them the ability to have a local or regional stronghold. That said, VG and Aftenposten are national brands. 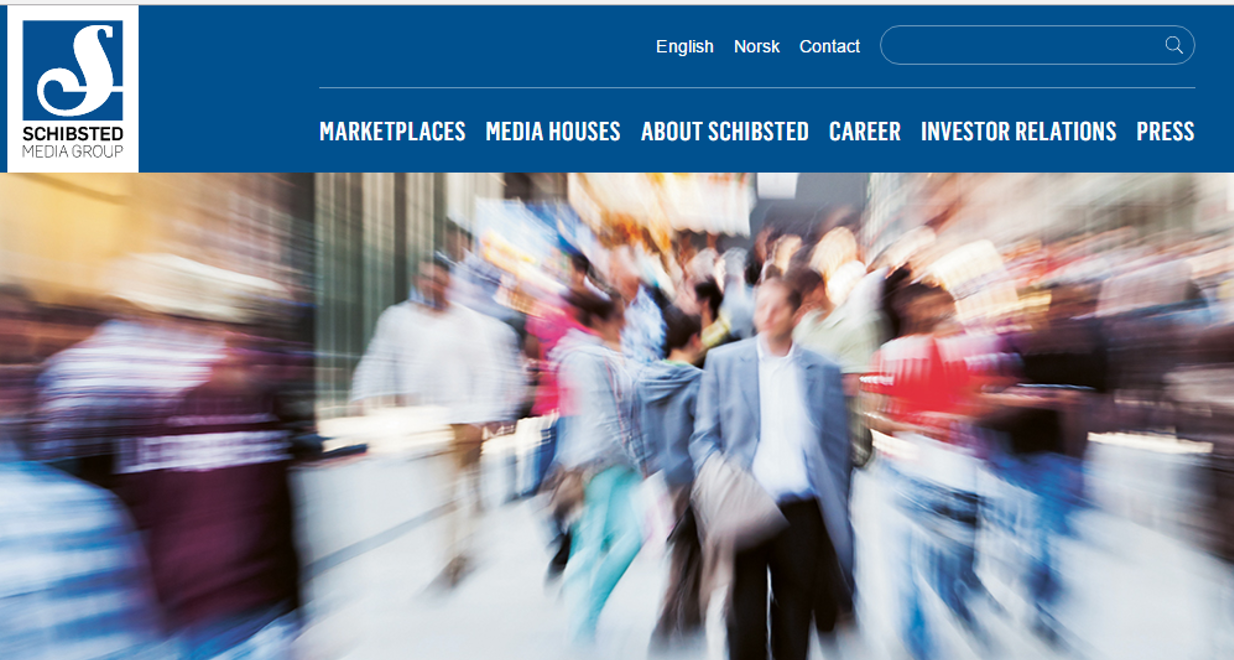 Now, Schibsted is an international media group with 6,900 employees and numerous digitals brands in 30 countries. Our strategy to become a global leader within our fields is bold. It consists of three elements that work seamlessly together: Classifieds, Growth and Media Houses. We are headquartered in Oslo and listed on the Oslo Stock Exchange.

What separates the company from others and what is the focus on today?

What’s special with Schibsted is that it’s really large in ads worldwide. It’s the major provider of personal ads in France and Spain and is of course leading the way in Norway and Sweden. We have branches in Asia and South America, too. So, while news was formerly the big business, classified is the major part of the company today.

How have you managed your transformation and how have you driven your moves into global markets?

The reason Schibsted went into classifieds was that it had been such great success, establishing a totally dominant position in Norway with print ads. Going back 10 years, Aftenposten was coming out with 270 pages every day, full of print ads. But the company was able to move into digital ads before any of its competitors entered the market – before Craigslist, before Facebook and others. This gave us an early, strong position in Norway. Then Schibsted bought similar companies in Sweden, to also dominate the classified position there. The model was then moved worldwide.

Why did you enter the magazine media business – returning to a stronger print position?

Our objective was in part to build our brand and in part to replace falling ad revenue with a new source of income. We already had the know-how of journalism, sales and marketing. Furthermore, we had unsold ad space in newspapers and websites – why not make a business out of it rather than filling it with functionless ads or selling it cheap. And, most important, we had a customer base that we could use to increase ARPU (average revenue per user).

Norway is quite unique when it comes to home delivery. The newspapers have their own route network and carrier service. The base for our business is our subscribers, which makes income quite predictable and controlled. With single-issues at the centre of your business, your print run can fall from one issue to the next, based on things as simple as the cover. That doesn’t happen for subscription sales, so it has given us the platform to develop new products and to evolve.

We started doing magazines with support of the Aftenposten brand. It was quite close to the thing we already did, but through magazines we could grow without competing against ourselves. We could fill some holes in the magazine media market for significant content, such as insight, science and history. When we entered the magazines business with Aftenposten Innsikt (Insight) we soon saw that there was a great potential. It was an established brand as a section in the newspaper Aftenposten. We worked on the basis that readers of insight stories in a newspaper would also enjoy in depth long-reads articles in a magazine. 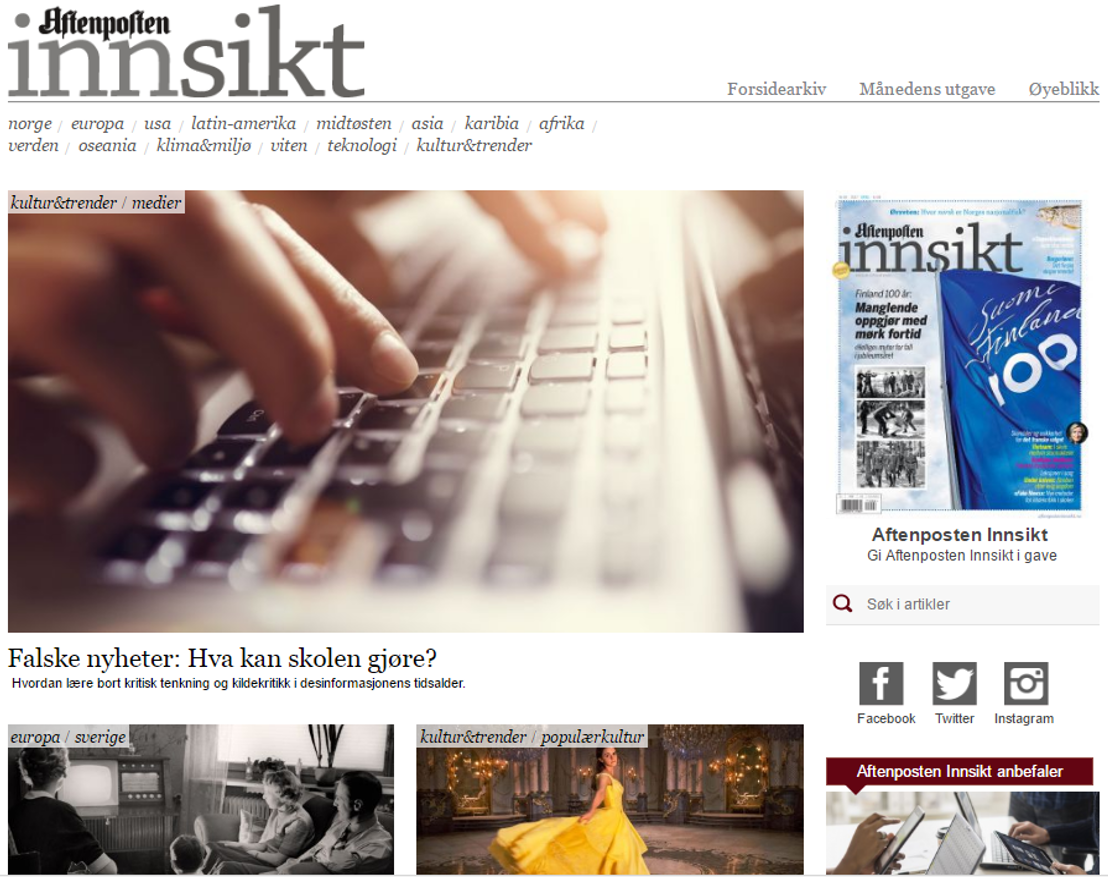 I was previously marketing director at Aftenposten and we saw that our publishing portfolio achieved stronger brand building impact than any marketing campaign could ever do. We also loved the idea of using the branding budget to invest in the start up of brand extensions, rather than spending it on external brand advertising. That was quite successful, so we carried on doing it, not just launching one magazine, but building a new department. The business is booming, based on know-how for editorial, know-how for subscription sales.

Eight years on we publish five magazines, a newspaper for kids and a stand-alone magazine app with 24 magazines titles (more than 2,500 issues). We have had an annual growth of 25-30 per cent since 2008 and the business unit is highly profitable, with a margin exceeding 30 per cent. The paid print run is more than 150,000 issues per month and we reach approx. 1 million readers.

What can others learn from your journey?

When you have a successful business built on a strong brand, a large customer database and unsold ad space you can use your know-how within editorial, sales and marketing to evolve your business with brand extensions. I think that is quite transferable to other media companies. Maybe they don’t have all the elements, but they may have three or four and you can use those to help build your business. Once you have that large, established bank of print content, as we do, it’s quite easy to take a position in the digital market. So, I want to take what we have learnt, share it at the FIPP World Congress and hopefully others might also be able to learn from it.

Join some 800 other delegates from around the world at the 41st FIPP World Congress, in London, 9-11 October 2017. Learn more at fippcongress.com. Click here to book your place

[Congress speaker Q&A] Inside view: the battle for top talent across media, tech and other sectors