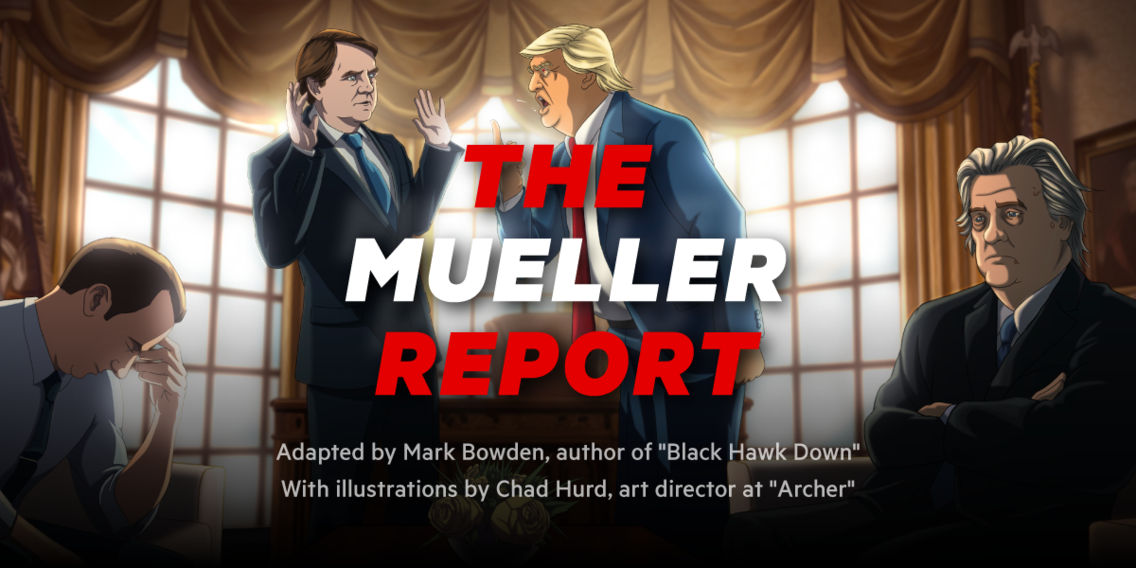 In July, Insider published its own version of The Mueller Report as a 15,000 word narrative written by Black Hawk Down author Mark Bowden and illustrated, in a bid to make the 448-page document more accessible to the general public.

The Mueller report, or The Report on the Investigation into Russian Interference in the 2016 Presidential Election, is the official report of the findings and conclusions of Special Counsel Robert Mueller’s investigation. After the report was submitted to Attorney General William Barr in March, a redacted two-volume, 449-page version was released by the US Department of Justice to the public in April.

In the weeks following, publishers sought to sell the Mueller report with additional analysis and documents, as a paperback, as an ebook, and an audio book on Amazon. The New York Times even made an interactive out of it.

At Insider Inc., owned by FIPP member Axel Springer, global editor-in-chief Nicholas Carlson had downloaded the audio version of the report and bought a hardcover off Amazon. But, as he delved into the report, he noticed others weren’t.

As Carlson listened and read through the report, “every once in a while, amid the sea of legal jargon, I would catch wind of a scene, something with dialogue, drama, comic or tragedy,” he explained. “It felt to me that there was good material buried within it.”

The idea to create their own Insider version of the Mueller Report came from Carlson and features editor Siddhartha Mahanta, who thought to rewrite the 449-page redacted document in a more thrilling fashion and highlight important parts, so that audiences would actually read it.

“A great nonfiction writer’s job is to pluck the moments that are most illustrative of a story and arrange in a compelling fashion and present them,” Carlson said. “At the top of our list was author Mark Bowden, who is exceptionally good at taking reports, interviewing people, and going places to find out what happened, and arranging the information in a fantastic structure.”

Mark Bowden was the perfect fit to rewrite the report. An American writer and journalist, Bowden is best known for books “Black Hawk Down” and “Killing Pablo,” in addition to multiple others.

“I thought it was a great idea and gave me a chance to read and study the Report, which was fascinating,” Bowden said in a statement. “Much of it deals with the legal reasoning for what Mueller’s office did or did not do, but the meat of it was testimony given by Trump’s hand-picked, closest associates. This is the kind of raw material reporters only rarely get to work with, and much of it was very dramatic.”

Bowden did enjoy working on it: “it reminded me of work I used to do now and then at The Philadelphia Inquirer,” he said. “When there was a big story, the editors sometimes would ask me to read all the wire copy and the notes turned in by other reporters, and then shape it into a dramatic narrative. It required no original reporting on my part, so it was an editing and writing job, things I like to do.”

In addition, Carlson thought to show Insider’s audience the report with visuals. He explained, “There were moments where the report comes alive with scenes that belong in a movie. How could we show our audience what we want to show, in a way that they were not getting?”

Carlson reached out to comic book artists, but found a style of illustration he liked on a tv show called Archer. He found Chad Hurd, an Emmy Award-winning producer, art director and illustrator who designs Archer, an adult animated sitcom for FX, and asked him help illustrate the project. “Chad understood our idea and was super-excited to start on the project. The notes we needed to give him were minimal, and he reached out to a colourist and other people to help him,” Carlson said. “We got four panels done, we wish we could have done more, but Chad has a day job and we had a deadline. We really wanted to get this out before Mueller testified.” 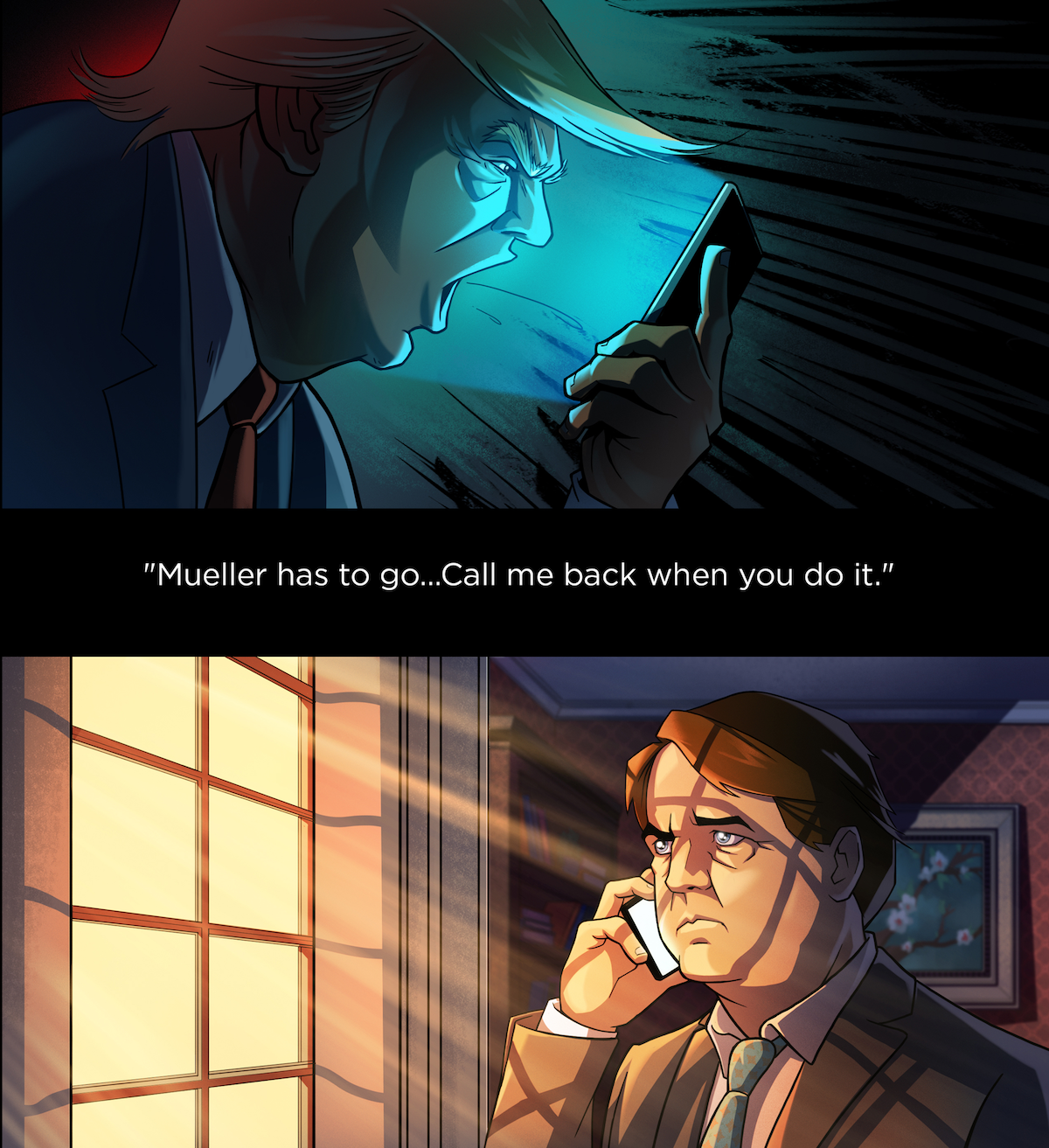 From Volume 2, page 85: The president calls McGahn from Camp David three times and tells him to tell Deputy Attorney General Rod Rosenstein to fire the special counsel. McGahn hangs up each time and does not follow the order. Courtesy: Insider

Insider’s rewritten and illustrated Mueller Report is approximately 15,000 words. The feature took about three months to come together, according to Carlson. The biggest obstacle was that the report was lengthy, with lots of interesting revelations in it, and it was challenging figuring out what Insider’s feature would focus on.

“The biggest challenge was taking this 449-page document and deciding what was the story. We had to consume it, to pull it apart, break down facts, highlight which moments were worthy,” he said. “The big advantage of the story is that it’s all there. It’s just sitting there in the documents. 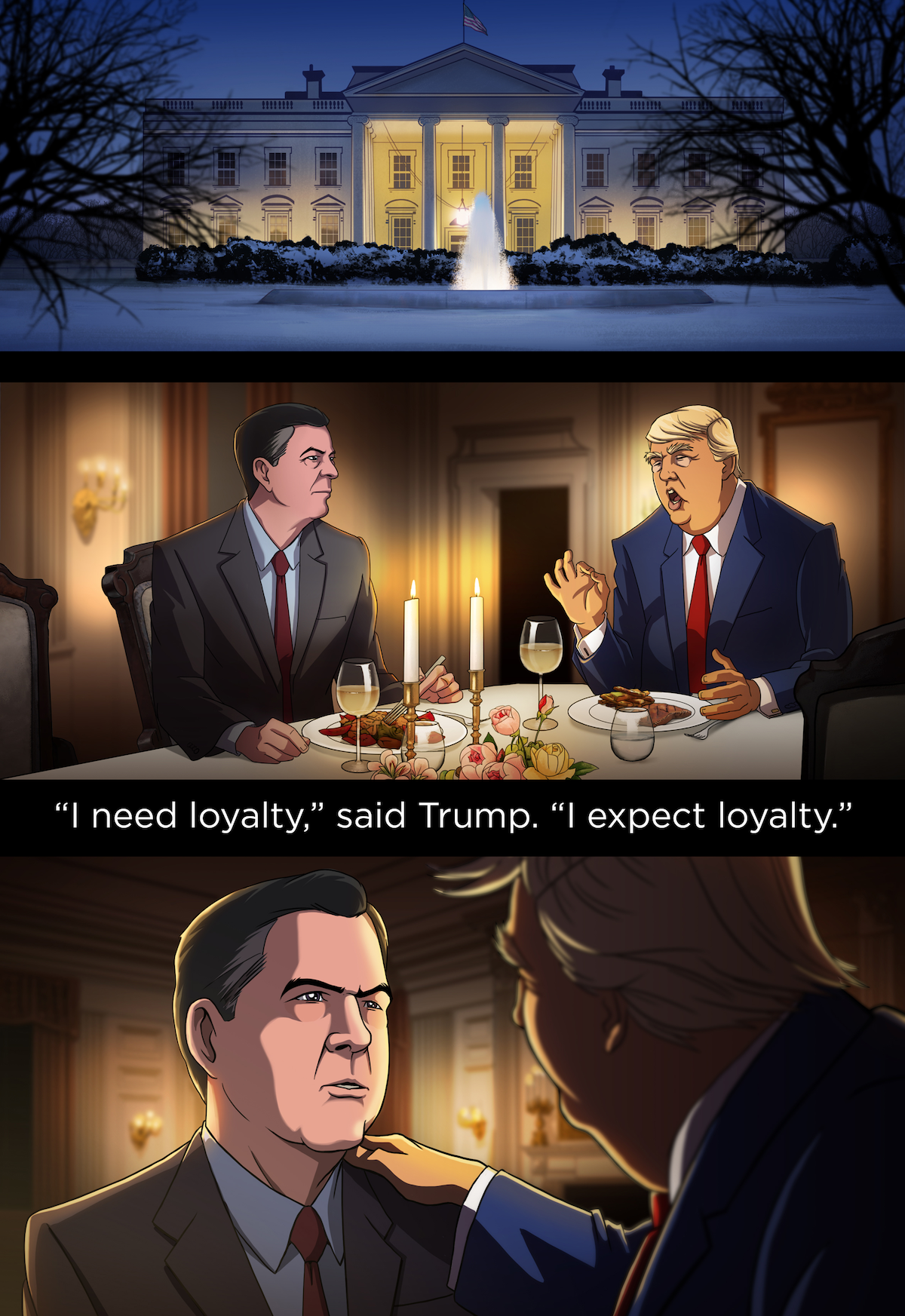 From Volume 2, page 34: During a private dinner at the White House, Trump tells Comey he needs loyalty. Courtesy: Insider

“The main character in the story is Donald John Trump who wants the scandal and the investigation to go away, and he tries a bunch of different ways. We thought, out of the 449-page document, that’s the story we’re going to focus on,” Carlson said. “We wanted to really highlight and clarify the definition of obstruction of justice as laid out by Robert Mueller. This was a choice, too.”

The biggest thing Carlson learned through the process of pulling this feature together from idea to published version, was to go for it. “This was a story idea that was outside of the norms, and it really got a lot of attention,” Carlson said. “Now, I’m thinking about what else can we do that will make a splash by going outside the usual way of doing things, thinking about what we could do with a digital medium, blending text and imagery in a way that people credit magazines with. I’m thinking on what else we can show people through great art and great illustrators that really speak to the subject material.”

Business Insider, one of the brands under the Insider Inc. umbrella, has a history of publishing big features with impact. But, Carlson explained it can be difficult for media companies to invest in big features like these all of the time.

…and our corporate cousin @welt translated and printed it so Germans can too.

Currently, Insider is striving for sustainability, Carlson noted, “so that we can reinvest in more and better journalists. This year we made a commitment to improving our everyday product. We have an appetite to do more of this and we want to bring great stories like this one into the world and find great writers like Mark Bowden and illustrators like Chad Hurd to help us do it.”

The reaction by Insider’s audience to this feature was attention – lots of attention.

“A lot of our readers are really into it,” Carlson said. “It got a lot of coverage and the feedback’s been really great.”

Behind the Economist’s new collaborative podcast with Slate