Flipboard and Kantar Millward Brown have released the findings of the inaugural UK Mobile Mindset study, which looks into consumers’ attitudes to mobile content to determine their mindsets and motivations for engaging with content and brands on mobile platforms. The research, which surveyed nearly 2,000 UK users, discovered that those who exhibited active mindsets displayed higher engagement rates, brand favourability and purchase intent when served with advertising on mobile platforms. 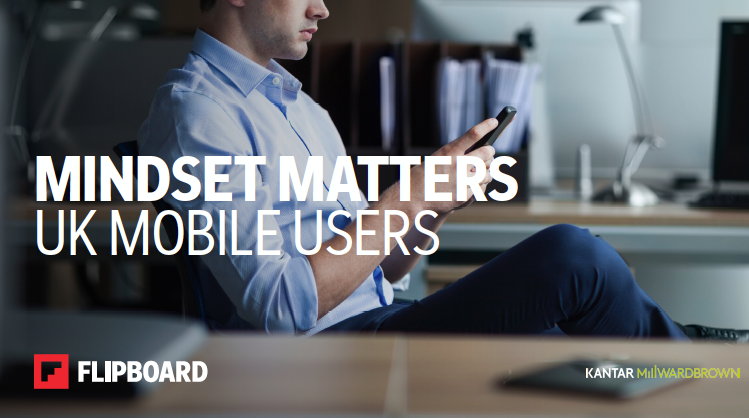 Spanning users’ daily consumption habits on Facebook, Flipboard, Instagram and Twitter, the research highlighted that mobile users are at least four times more likely to find an ad appealing if it aligns with the content and context they’re engaging with at that moment, than one served based purely on their previous behaviours and search history. The research also identified eight different mobile user mindsets*, with two of these being deemed “active” – users in active pursuit of new ideas and inspiration to learn and improve themselves, the “self-invested”, and looking for inspiration and creative expression, the “creative minded”. These active mindsets were found to be over 10 and 4 times respectively more likely to engage with adverts that were contextually relevant. 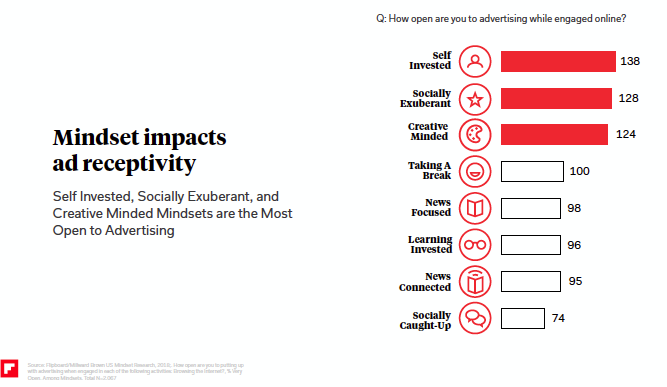 Soumen Mukherjee, managing partner at Kantar Millward Brown said: “We identified eight different mindsets among UK mobile users depending on the activities they’re undertaking. When people are more actively engaged in the content they consume, they show higher ad recall and favourability rates, which advertisers can use to their advantage.”

Nicole McCormack, SVP of strategy at Flipboard said: “The hyper-personalised and connected world that smartphones have created means that consumers find themselves in ever changing mindsets depending on what they’re looking for, and that’s challenging for the brands that want to market to them. We see this reflected on Flipboard, where people tend to be in an active mindset and also more likely to engage with the advertising they see on the platform, creating an opportunity for brands to offer valuable marketing content and see greater ROI as a result.”

The results also identified the level to which consumers felt good about themselves when using the different platforms. Flipboard users who were engaged in motivations centring on self-connection are 4 times more likely to report that they felt better about themselves when using the platform compared to users who were on Flipboard just to stay up-to-date.

A parallel study was also published in the USA earlier in 2018 that highlighted similar results, with those consumers with more active mindsets and more engaged in the content demonstrating a higher propensity to recall advertising and a greater intent to purchase.

Chart of the week: Marketers have yet to embrace Snapchat