The agency man continued “This positioning job is important in determining how clients talk about print media at a top-line level. For example, I’ve been in rooms with clients where print has been pigeonholed purely for one stage of the funnel, and the case has had to be made by the agency for a role elsewhere in the funnel too.”

There is plenty of evidence for making that case. One of the most recent has come from the MPA in America, where they commissioned research agency Millward Brown Digital to analyse their existing data on a large number of marketing campaigns over the last eight years. The study has been published under the title ‘The Print Campaign Analysis’.

There are many ways of describing the purchase funnel or consumer journey. I set it out in seven stages in my ‘Proof of Performance: Making the case for magazine media v2’ book for FIPP (Figure 78): 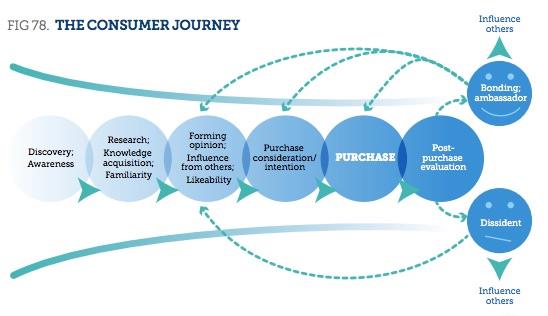 Millward Brown calls this the Hierarchy of Advertising Effects – another term for consumer journey or purchase funnel.

Millward Brown aggregated the results of a series of Cross Media studies they had conducted for real clients during the period 2007-2015. They were based on survey responses from more than a quarter of a million consumers. These studies had assessed each client’s campaign against each of the four stages of the consumer journey (the Hierarchy). The principal aim of the new analysis was to compare advertising in print, on television and online.

Among the main findings:

1. At the stages of the hierarchy which are closest to purchasing behaviour – namely brand favorability and purchase intent – print advertising achieved greater effect than online or TV advertising. This is a conclusion which was also found in a number of other studies in several other countries, and looks to me like a generalisable effect.

2. TV and online advertising showed diminishing returns after four exposures, but print continued to improve ad awareness and persuasion at higher levels of exposure. I find this evidence of relatively rapid diminishing returns to TV and online advertising particularly significant because it is at the heart of a key argument in the case for magazine advertising. When TV or online are over-used and the response from any further advertising would be reduced, better results would be obtained from under-used magazine advertising which is still on a steep section of its response curve. (My article ‘Explaining magazines high return on investment’ has more on this.)

3. Media combinations were most effective when print was part of the mix. Overall, TV + online + print was the strongest combination. I know that all campaigns using TV are also going to use online as well these days, but it is best to use print too, in moving consumers towards purchase.

4. Adding print to a TV schedule actually helped consumers recall the TV ads they had seen. That conclusion takes me right back to the classic British ‘Media Multiplier’ studies of the late 1980s. As far as I know, these were the first published qualitative research projects to demonstrate that magazine advertising not only communicated  certain things better than television but also enhanced the response to a campaign’s TV commercial. The studies not only proved that magazines make TV work harder but – very importantly – also explained how. (The studies were reviewed in some detail in my 2005 report ‘How Magazine Advertising Works’, written for the PPA; see pages 83-85.) A number of subsequent studies in other countries have reached the same conclusion, so the finding in this new MPA analysis is well supported elsewhere.

MPA has published a video of a December 2015 webinar about the Millward Brown analysis as well as making a slide presentation available.

These valuable MPA/Millward Brown results follow similar conclusions from previous studies in many different countries. Some are reported in my ‘Proof of Performance: Making the case for magazine media v2′ (see Chapter 8). Other examples have been given at FIPP Insight Forums. For instance, there were several at the 2015 event in Amsterdam. No doubt the forthcoming 2016 FIPP Insight Awards (details to be announced soon) will provide some further examples – and stimulating new evidence on much else besides.

These and many more studies, from a variety of countries and across time, converge on the same conclusions and reinforce the new MPA analysis: magazine advertising is very effective, often more cost-efficient than other media; and there is great value in adding magazines to campaigns where it has already been decided to use television and online.