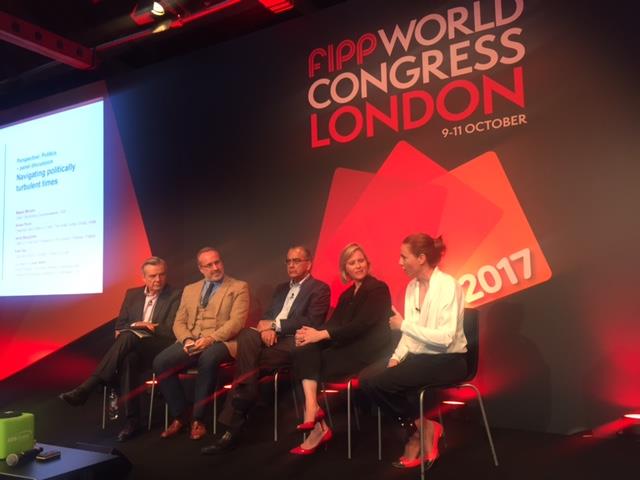 This was the consensus among four senior political editors during the second day of the 41st FIPP World Congress in London. Megan Murphy, Editor of Bloomberg Businessweek in the US, Aroon Purie, Chairman and Editor-in-Chief of the India Today Group in India, Jerzy Baczynski, Editor in Chief and President of the Board at Polityka in Poland and Kate Day, Editorial Director at Politico Europe in the UK were interviewed by Juan Señor, Senior Partner at Innovation Media Consulting in the UK during a panel discussion about the political challenges faced by the media around the world.

Señor said while political disruption of the media has always been out there, “we are currently experiencing flame throwers of political disruption in many countries”. He said, this manifests itself in many ways, from delegitimising the media like when US President Donald Trump calls the media “the enemy of the state” to more subtle ways such as restrictions, changes in legislation and threats, while asking panelists to share some insight into how political discourse has come under attack in their various countries or regions.

Baczynski explained one of the first targets of the new Law and Order party after they won elections in Poland in 2015 was to take over public publications, radio and television by placing them under the direct control of the government. “They did it in a very simple way by dismissing and firing 300 journalists and commentators.

The head of television was replaced by an active radical politician responsible over years for party propaganda.” This had effectively transformed public media outlets into “brutal propaganda tools”. For people of his generation, said Baczynski it is unbelievable that the very worst of communist models has been brought back.

But this was only the beginning, he added. Soon private opposition media were deprived of all advertising contracts from large State Treasury-owned companies, while government entities received instructions to cancel subscriptions to so-called “hostile” titles.

Despite all of this, said Baczynski, their role remains to reflect honestly and impartially on what happens and what is being said. “You have to be in constant discussion, debate and dialogue of what they (the politicians) are saying. Is it lies? Is it fake news?”

He said this is exactly what happened in India with the rise and election of Prime Minister Narendra Modi. “He appealed directly to the people in a populist manner… as traditional political structures dissipated.” With this comes also the delegitimising of the media, said Purie, referencing Modi’s description of the media as “news traders” and “news merchants” in attempts to discredit media organisations. Similar things have been said about the media in Turkey, he reminded the panel members.

Despite these attacks, said Purie, “we should never lose our basic rules of reporting. We need to continue reporting in a balanced way. It’s important to retain our traditional role of reporting the facts, being as objective as we can…and maintain balance. In the process you must continue to expose what is reality and what is myth.” The media’s role in exposing the truth, he said remains the most important thing and luckily this is starting to happen in India.

Commenting on American politics, Murphy said that President Donald Trump has been the the most effective mobiliser of Twitter as a content distributor that the media has ever seen. In fact, the media was late in grasping what Trump was doing. “There is no question that the phenomena that Trump was… was the perfect storm of trends we were seeing in the media which traditional media battled to understand like using social to troll… He was the first candidate to realise that to appeal to his base (he should) not be rational and act very unpresidential… It smashed the glass on reality leaving no line between reality television and what we saw playing out in the campaign.”

Murphy said the biggest issue and the biggest disruption we face is that people no longer believe in establishment. “It is not just politics and it is not just media…It isn’t the extremities on the left or the right. It’s about everyday people who work hard and no longer believe that their political class, their media class, their educational class are actually doing anything to make their lives better. That to me is the most dangerous part of this.”

It is this environment that Trump is taking advantage of populism and the people distrust the establishment. Murphy said what the media are doing now is trying to bring truth to what is happening under Trump. “It is incredibly hard under an administration that lies openly on a daily basis to get to the truth of the matter. I am tremendously proud of the press and what they have done with Trump. In the beginning there was a massive disconnect but look at the journalism of the last three weeks… It shows that we are in a thriving period.”

Day said we need to remind ourselves that beyond political disruption and social disruption of the media, there is also a third disruption: the disruption to business models and the sustainability of our press. To be able to fight political disruption and “throw some truth into this melting pot of noise” we need to have a sustainable and independent business model, she warned, because “all three of these are interrelated and probably more so than journalists would traditionally acknowledge. “We need to be conscious that we are building sustainable publications that keeps us independent – that is crucial in this conversation.”

According to Day, no matter the challenges, “our role is not to bring down leaders or support leaders. It is to explain what is going on and set it in context.”