The small team at The Slow Journalism Company in London under the editorship and directorship of Rob Orchard and Marcus Webb are currently working on issue 31 of their Slow Journalism quarterly Delayed Gratification, launched back in 2010. Starting a magazine with a business model purely based on subscriptions and newsstand sales, packed with non-partisan, independent and intelligent slow journalism in a time of digital thrills did not come easy. Some minor miracles first had to happen, recalls Matthew Lee, associate and founding editor. 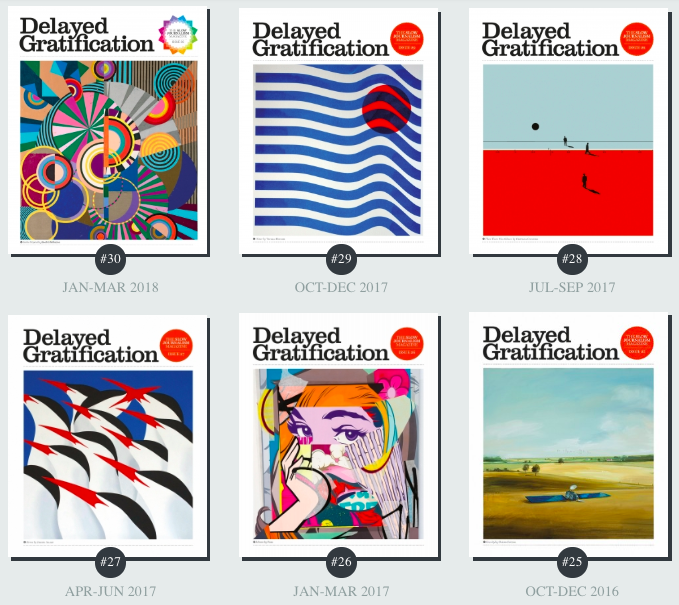 One of these was that the team who would eventually end up launching “their ideal magazine” found  themselves working together at Time Out Dubai around 2004. It is here that they would discover “over endless conversations” that they shared the belief that many good news stories are being missed, or mis-told. They agreed that there is still a space for long form journalism despite digital disruption, that infographics can at certain times tell stories better that words and that a platform should be created for hindsight to inspire, inform and entertain.

By 2010, when all of them returned to London, this conversation intensified and it became time to launch Delayed Gratification. The first issue did not sell well. “We sold tens of magazines. Not even dozens, tens.” It was time for another small miracle.

Webb secured a short slot on The Today Programme on BBC Radio 4. The interview went down well and the next day they sold just short of 500 subscriptions. “This gave us the momentum – and cash flow – to get through the first three months.”

With their first office nothing more than “a cupboard” in the old Time Out Office in Tottenham Court Road and all of them continuing to work full time jobs, Delayed Gratification remained an evening and weekend project for the first two to three years. Yet, circulation steadily improved and it’s now been some years since since they first broke the 5,000 and later the 6,000 circulation barriers. The next target? 10,000.

No matter how tough it can be, ad free, subscription based journalism is liberating, says Lee. But data free journalism is even more so. “We are a print magazine. We are not trying to get hits on our website, we are not worrying about the kind of articles that people are reading or not reading (online). We are completely free to be curators.”

This gives them as editors the opportunity to choose the stories they believe their readers will find interesting and not because they burdened themselves with data that might suggest they need to create content about one subject with the hope it might outperform content about another subject. “From a reader’s point of view, we hope that we can introduce some degree of serendipity, and some degree of curated experience that’s essential for editors to do their job, which is editing…

“People who subscribe to a magazine put their faith in editors to provide them with a range of topics that will produce some sort of whole, which has balance, mix and diversity. This cannot be driven by analytics, like Google news giving the reader merely more of what they have been reading already. Or being influenced by the whims of advertisers, or public relations groups, focus groups, things that find traction on Twitter or Facebook. We do not worry about any of this.”

This freedom, says Lee, is not only an amazing privilege, but brings with it an obligation to present a slow journalism perspective on the biggest news stories of the previous three months. “We want people to look forward to our take on those stories.”

With Delayed Gratification’s motto being that they are “Last to breaking news”, Lee says the question they constantly need to ask themselves when they cover the big stories is what can they add one to five months after the story actually broke. “What can we add that could not have been published in the hours and days after the story actually broke? What is the perspective that adds to a story that’s already out there?”

Lee says by taking this approach they are not necessarily suggesting other news organisations are failing in the way they report big stories. “There are news organisations out there that are doing a fantastic job and some stick with a story for weeks or months.” He references the almost year-long investigation by the New Yorker Magazine detailing allegations of sexual harassment and sexual assault by Harvey Weinstein. These are excellent examples of slow journalism.

In cases like these Delayed Gratification might not have a lot to add to the story. “If we are last to breaking news and there is nothing to break, there is nothing wrong with it. It is fine. We might decide – with our limited resources – not to dedicate much space to it because it has been covered well.”

Going back to a story

And when news organisations cover a big story, lose interest and forget about it, it is Delayed Gratification that will go back to it months later, like the Parkland school shooting in Florida in February, which Lee himself revisited to speak to those who are now driving the “Never Again’ campaign.

What Lee finds encouraging is the sense of community they are starting to experience around the Slow Journalism movement as a whole. This has inspired them to organise events to meet the people supporting them, culminating in monthly interactive workshops dealing with slow journalism, storytelling, feature writing and the creating of infographics. This has proved to be so popular in London that one of these workshops have now also been successfully held in Porto in Portugal, organised by an independent magazine shop who has started selling Delayed Gratification in Portugal.

Support for Slow Journalism is, in fact, a growing trend worldwide. In June this year the University of Oregon hosted the world’s first Slow Journalism conference, organised by Peter Laufer, holder of the university’s James Wallace Chair in Journalism. In 2014 Laufer authored the 2014 book Slow News: A Manifesto for the Critical News Consumer, which examines the nature of news in the context of the increasingly frenetic pace of modern life in the twenty-first century. Lee, who attended the conference, says Laufer and delegates share the belief that the growing obsession with speeding up the process of breaking news leads to less fact checking, brevity, more fluff, PR driven news, lack of detail, lack of patience, less dept and even less concentration – accurately summed up as “nonsense”.

This month (September, 2018) will also see the book Slow Media by Jennifer Rauch go on sale. Rauch is Professor of Journalism and Communication Studies at Long Island University, Brooklyn. In the book she argues that Slow Journalism, like Slow Food, is more satisfying, sustainable, and smart. She also offers a new ethical framework, rooted in sustainability, for the production and consumption of news media and digital devices.

How brand magazines are becoming more sophisticated – and successful