Lined up against the $20bn in revenue generated by newspaper ads, Kickstarter’s sums may seem anaemic. Yet the funds and influence that Kickstarter —alongside a growing number of publicly funded journalism projects—represent is no small change, literally and figuratively. 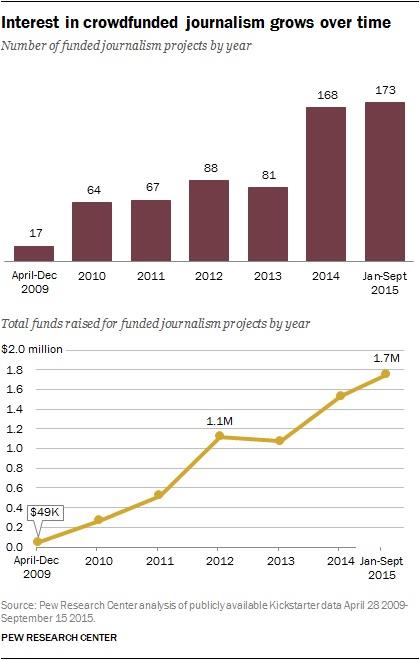 Kickstarter is just one of a growing number of crowdfunding platforms, and one among several that are specifically focused on journalism. The Pew report notes: ‘In today’s evolving digital era, [crowdfunding] represents a new, niche segment of nontraditional journalism driven in large part by public interest and motivation.’

In short, it’s a new chapter for journalism that offers a win-win-win. Win 1: Hungry, enterprising journalists, who are seeking the means to report on important and untold stories and push the envelope, are tapping into the financial resources to do so. Win 2: The public gets a seat in the editor’s chair to support the journalism, stories and topics they find meaningful. Win 3: Media organisations are dialing into quality and diverse content without the burden on their budget.

Beacon shines a light on journalism coverage and funding gaps 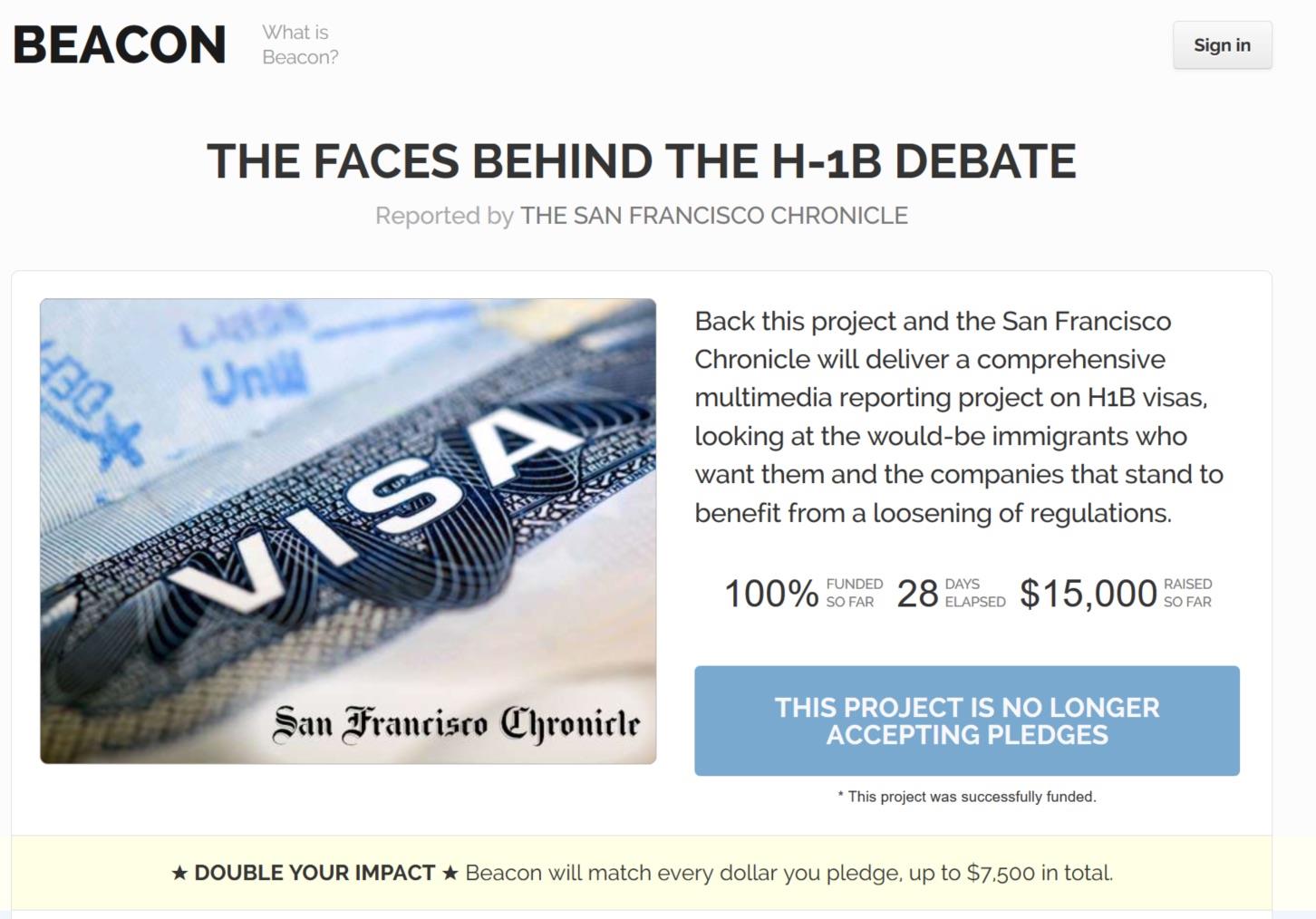 Last fall, an alternate plotline in the crowdfunding story began to crystalise. Beacon, an Oakland-based startup and crowdfunding platform, announced a $3 million campaign to fund stories focused on immigration. Subsequently, the San Francisco Chronicle announced its plans for a $15,000 multimedia reporting project titled ‘The Faces Behind the H-1B Debate’, covering immigration and the Bay Area tech industry. The Chronicle was calling on readers to fund the project and was the first newspaper to partner with Beacon. The Nation and ProPublica also joined the fray, alongside a number of other smaller independent outlets, to cover an angle of the immigration beat.

The Beacon campaign represents several shifts in the crowdfunding space. Top among them, the focus has shifted from individual journalists or journalism groups, to broad topics, ‘filling a gap in journalism’. Crowdfunded journalism is also getting, well, crowded. Established media outlets are taking more space, collaborating directly with crowdfunding platforms. One example is The Huffington Post raising $40,000 to transform a local citizen journalist into a dedicated reporter in Ferguson, MI, following the 2014 police shooting of Michael Brown.

Among Kickstarter projects alone, established media organisations and outlets now represent 22 per cent of funded journalism projects, which according to the Pew report, ‘have had a measure of success’. This prompts a closer look at how business models—with alternate revenue strategies and streams—might evolve in an era of diminishing ad dollars. Simply put, it’s an effective way to get readers to pay for news. But is there room to grow?

While there is plenty of hype around successes, journalism crowdfunding platforms have also had a measure of failure. Against this backdrop, Beacon’s immigration campaign underscores a savvy approach in the strategic repositioning of its funding model. After establishing itself in 2013 on a pay wall and subscription model, Beacon has redirected its efforts to center on partnerships and matching funds.

‘If I put in $100 to someone I know or a publication I trust and as soon as I pledge, I see that turn into $200,’ said Dan Fletcher, Beacon co-founder in Poynter.org. ‘I feel like I’m having more impact. This, Fletcher added, ‘is something readers are ultimately looking for’.

In crowdfunding we trust?

Some argue that the Pew report may generate a degree of unmerited hype around the role that Kickstarter has to play in publicly supported journalism. Through the Cracks: Crowdfunding in Journalism provides an inventory of standout journalism funding campaigns in 2015 beyond the Kickstarter universe, which quickly overtakes the $6.3 million raised to date. Clearly, there is room for greater innovation and new directions. One example is crowdfunded fact-checking. In the scramble to fund quality journalism and coverage of important topics, one mantra seems to hold true: engage, engage, engage. Crowdfunding is not going away.