Julian March, MD of Media, Games, Video & Entertainment, Future plc, began his presentation by running through Future’s DNA. He said that the company considers itself a global platform for specialist media. “We help people do what they want to and have more fun,” he said. “We do this by running websites, events, magazines and more in high passion verticals.” 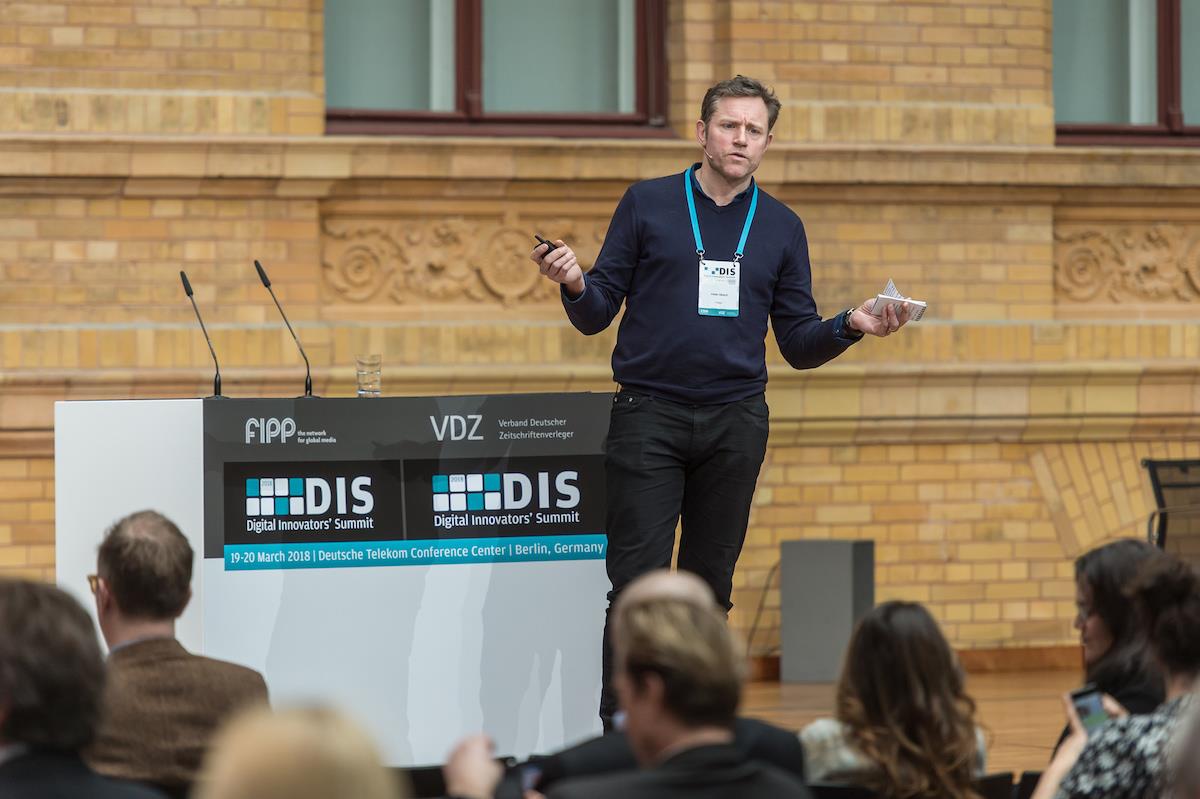 Julian then talked about how the massive changes in digital publishing had been a major issue for Future. “Five years ago Future very nearly didn’t have a future,” he conceded. “We needed to adapt and I want to share with you now what we learned.”

Julian then said that the new digital is about three big concepts that are crucial success factors, namely quality, diversification and value.

“In an age of fake news, clickbait and more this is how premium publishers can stand out and cut through.”

“Quality touches many areas,” said Julian. “As producers of premium content we need to aim high and make the best possible editorial. We also care about quality of engagement too. And like our advertisers we care about the quality of the audience, that they are real human beings who are passionate about their hobbies and making real purchasing decisions and not machines or bots.”

Julian then spoke about how in the food and drink world quality, premium brands were widely recognised and acclaimed. He intimated that there are parallels with content publishing with Future boasting world leading brands. To illustrate his point Julian mentioned how when Apple launched the smart speaker the company’s leading tech site, TechRadar, had people on the ground at the launch.

Similarly Neville Marten, who edits one of the company’s guitar titles has a heritage that includes fixing Jimi Hendrix’s Stratocaster as well as jamming with Eric Clapton.

Julian said that the company are constantly asking questions about their audience. How engaged are they? How long do they spend on the site. Where do they come from? Do they come with intent to buy etc?

“The fans that are most engaged are the ones who want to go to events, and often they have subscribes to magazines often for decades,” said  Julian.

He then went on to explain the way some of Future’s website properties act as a funnel. People ask and search for questions to which Future delivers high quality answers via reviews and buying guides. They then often make a purchasing decision sometimes via links to Amazon and other retailers.

He explained that the content, which was informed by data and search, was monetised in a number of ways including memberships and subscriptions, advertising, ecommerce, events, content marketing and licensing.

“Often content revenue streams work together in a narrative arc to connect the online world with the physical world of events,” explained Julian. He gave as an example the PC Gamer Weekender, an event tied to the title PC Gamer. “In the run up we do content previewing and building the narrative arc which peaks at the event. But then the event creates content which we put back online, extending the narrative arc and the lifespan of the event, thereby extracting more value from it.

Julian then spoke about the role different types of content play in the Future eco system. News content has a short but vibrant shelf life. Whereas evergreen content, such as buying guides, attracts readers over a longer period and is constantly updated to keep it fresh.

“We try to answer the questions that everyone is asking,” concluded Julian.

Matt Egan, Editorial Director IDG, followed Julian with a presentation entitled ‘IDG’s secret weapon – what we understand about engagement with an audience.’

Matt explained that like Future IDG is an independent global media company with both print and digital products.

“We live in the part of the model where media and tech meet,” he explained. “The pace of change has never been faster. This presentation is a snapshot of where we are and where we are headed. What never changes though is a strategy focused on engaging a high value audience and working with them to enable high value transactions.” 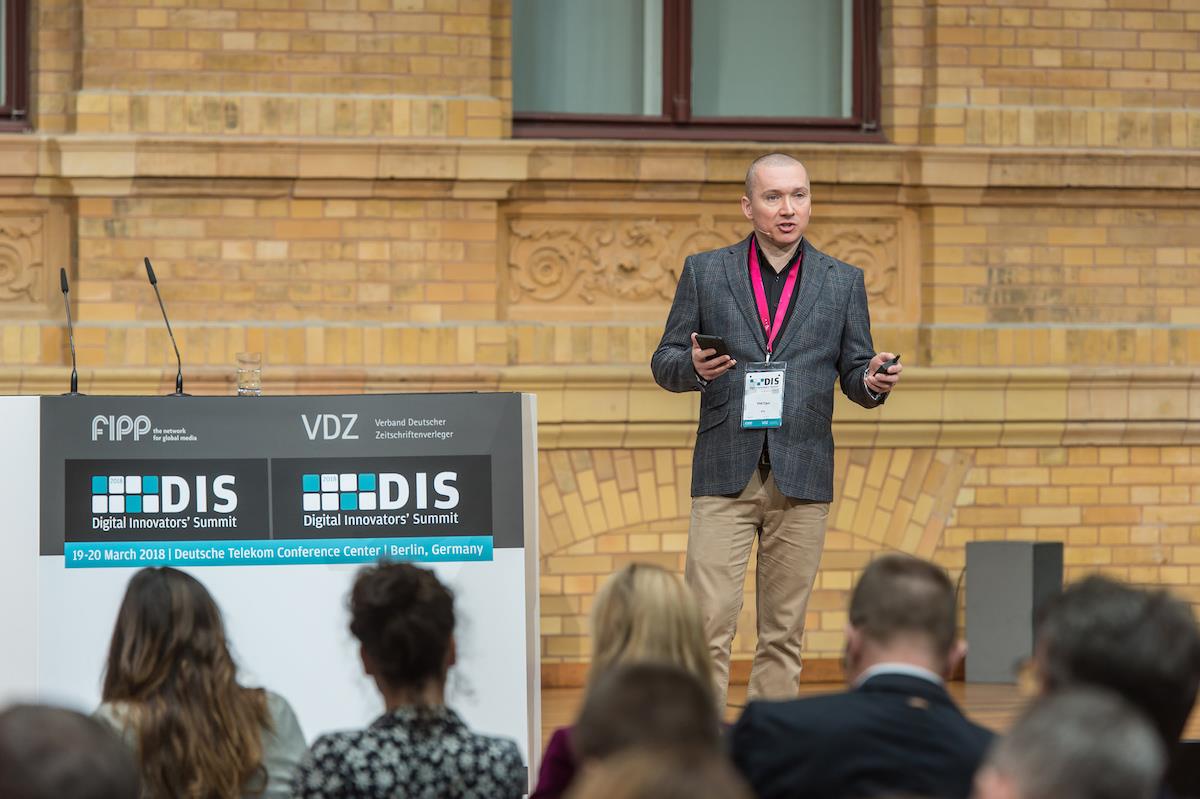 Matt then ran through to organisational structure of IDG explaining how it has “boots on the ground in 130 countries,” but that its strategy is determined by languages and cities. The teams in its core cities develop best practices which, when aligned to local knowledge, work successfully across the globe.

“We are constantly looking for increased collaboration across editorial teams,” Matt added. “While enabling them to satisfy local demand. For example, we share data so we know what is working and not working, but the local teams add their unique flavour to the content.”

Matt then went on to outline why a data-driven content strategy is so crucial to IDG. “If you understand why people search then you can target editorial expertise in the right place to serve them. The reader decides what they want to know and we provide the information. Everything we do is driven by delivering the best possible answers for what people are looking for, using our editorial expertise. Quality is so important especially as search engines are getting harder to game.”

He then described how the US b2b editorial team are defending 300 search terms with high quality responses. “We are combining traditional arts and science,” Matt said.

“We look at both data on our own properties and on the wider web. So, for example, we track data so we can see if someone with a job title of a CIO is looking at our content.Third party data platforms also help us to understand what is happening on rival publications in our space.”

The data is then deployed to make the most of the monetisation opportunities. For example, tracking someone who is making a purchase after being through an editorial page. They are inevitably more valuable than 10 casual readers. Although Matt added that while getting brands and readers to spend money is paramount, IDG’s approach is underpinned by editorial independence. He acknowledged that if IDG lost this they might have trouble treact readers in the future.

Matt described the audiences that IDG serves as being both global and local. The titles invariably focus on a specific niche in specific languages. There is also a focus on delivering content that readers can’t get elsewhere – IDG doesn’t, for example, major on news stories.

Part of IDG’s core approach is driven by the quality of the editors it employs. Matt describes the approach as being “not data driven journalism, rather data supported journalism.” Editors use their independence, integrity and knowledge to help shape the titles so that they address the requirements of the readers.

Matt finished the presentation by talking about the cornerstones of measurement and engagement.

“We measure success, not on page views anymore. These day it is about lots of things – ecommerce revenue, email sign ups, search page views, video and more.”