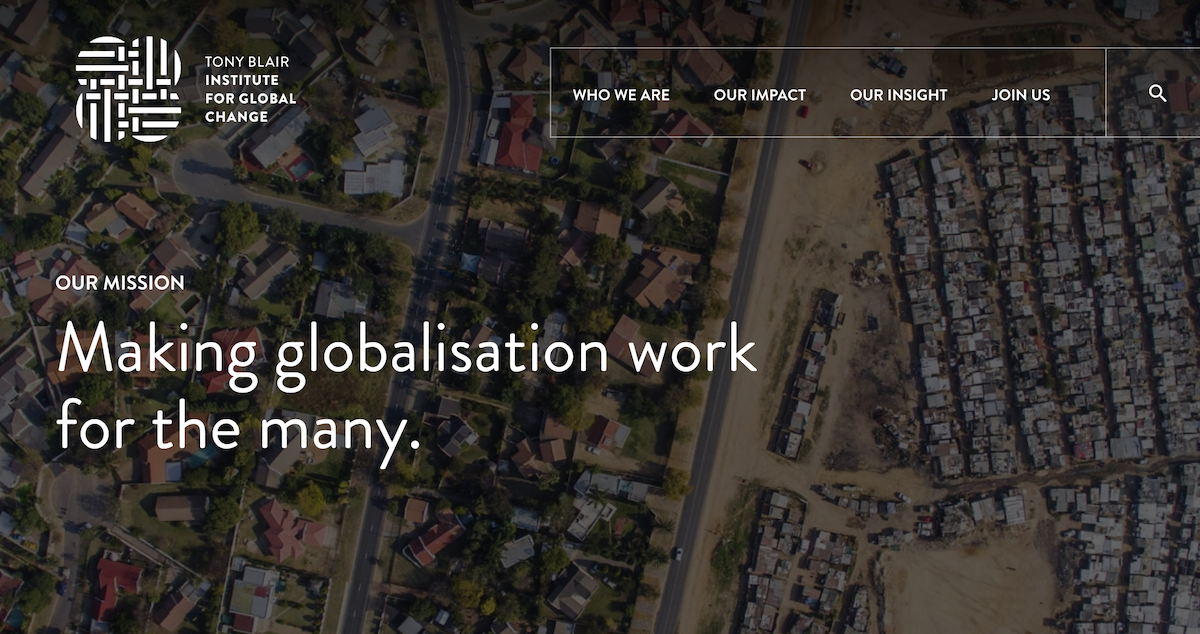 The Tony Blair Institute for Global Change is a non-profit organisation set up by former UK Prime Minister, Tony Blair, which seeks to help make globalisation and new technologies work for all global citizens. It brings together the previous organisations set up by Tony Blair after leaving office, including The Tony Blair Governance Initiative and the Tony Blair Faith Foundation, as well as his work on the Middle East Peace Process, and establishing a new area of work: Renewing the Centre.

Chris Yiu is a senior policy fellow for technology in that Renewing the Centre team. Previously a general manager at Uber as well as holding other senior roles in numerous public, private and third-sector organisations, Yiu examines the technologies that now dominate our lives and have upended our old assumptions about the world. His work focuses on how new technologies can be used to enhance the functioning of liberal democracy, enhance people’s lives, and meet the new economic challenges of automation and the digital economy.

With so much technological change now taking place within the global media industry, we asked Yiu to tell us about some of the key trends that he was currently identifying within the sector:

“The media sector is no more immune to disruption from the internet than any other part of the economy,” says Yiu. “As in so many other sectors, technology has moved the locus of power from controlling supply and distribution to controlling demand. This in turn removes the old gatekeepers that stood between those creating content and those wanting to consume it, and blurs the lines between traditional marketing, consumer engagement and campaigning.”

“When it comes to journalism, the big unknown is what a sustainable business model looks like for the internet era. Consumer-led services like iTunes and then Spotify solved this for music, but there’s no obvious equivalent for journalism yet – some big players may be able to make subscriptions or memberships work, but they will probably be the exceptions.”

Of course one of the big concerns for those operating within the industry is the impact that artificial intelligence (AI) will have on human employment. Yiu’s assessment of AI seems aligned with some of the more media-sector specific experts FIPP has spoken to in recent months, that AI will ultimately be there to help, rather than to hinder, those operating within the industry.

“Whilst quantitative estimates vary, there is broad consensus that AI and automation will mostly be about technology taking over tasks rather than entire jobs. Put another way, most jobs are already augmented by technology in some shape or form, and this process is likely to accelerate. Overall this should be a positive thing: workers will be more productive, and there will be entirely new jobs that don’t exist yet.”

“The challenge will be ensuring that those caught in the transition have access to the opportunities and skills they need to move on. Education will play a big part in this – not just in schools and universities, but making a real success of learning that is effective throughout people’s lives. Society will also need to confront and overcome its prejudices about what sorts of work have meaning and value, particularly in caregiving roles that we know will be increasingly in demand but historically have not conferred much status.”

The growth of AI runs central to the Institute’s very understanding of technological change. Its recently published report titled ‘Public Artificial Intelligence: A Crash Course for Politicians and Policy Professionals’ encourages leaders to ‘take steps to embrace the promise of AI while preparing for its impact and complications’.

Nonetheless, as Yiu highlights, making new technologies in a newly connected world work for the many and not just the few, is as much about facilitating widespread uptake as it is about being ahead of the curve.

“In the developed world lots of the attention this year has been on artificial intelligence, with real progress in sectors like healthcare and financial services. Looking ahead, we can expect more progress applying AI in broader settings – personalising learning programmes for students, say, or optimising welfare systems to ensure they deliver the best outcomes from scarce resources.”

“When it comes to practical impact on people’s lives, this is more often about successful mass-market applications than cutting-edge research. In parts of the developing world infrastructure is critical: advances in internet connectivity, power generation and storage, and connected industry and logistics.”

All of which implies a common sense approach to embracing new technologies while ensuring that they are serving as a force for good in people’s lives. For media owners, the on/off romance with Facebook traffic we have seen in recent years may resonate here.

Why is it then that looking at the world more broadly, in an age of populism and increasing backlash against global tech players like Facebook and Google, that globalisation and technological advancement are being embraced less enthusiastically now than they were a decade ago?

“Globalisation and new technologies are powerful forces for progress,” says Yiu. “They are also the source of real economic and cultural upheaval. Meanwhile the surge in populist movements around the world needs new scapegoats to maintain momentum. A backlash against the tech sector – with its reverence for disruption and its distant elites – suits those trading in outrage on both the left and the right.”

“At the core of all of this is a sense that those changing the world with new technologies are wielding great power but with little legitimacy. Moving past this will take a new approach to policy and regulation, grounding a debate about the values and responsibilities we expect from technologists and establishing new structures to maximise the opportunities of technology whilst mitigating its risks.”

You can read more about The Tony Blair Institute for Global Change Renewing The Centre’s insights into new technological regulation in the report ‘A New Deal for Big Tech: Next-Generation Regulation Fit for the Internet Age’ here.