Neil Vogel, CEO of About.com, said this drive amounts to “taking a company that was founded in 1996 to make it relevant in 2017”. He was speaking at the Digiday Publishing Summit in the US.

About.com was founded in 1996 as a general interest portal for people to search content across a broad range of topics. In 2012, Barry Diller’s IAC acquired it from The New York Times for $300 million.

“The good news was that at that time we were still a Top 20 website. We had 100 million users. We had a 100 million in revenue, so it seemed like a reasonably compelling thing people want to own. The issue was we were half the size than we were two, three years before and were kind of in free fall,” Vogel said.

He was brought in shortly after and one of the first questions was, “Why do we still exist? What value in the world does it still have for people to use it? What we found was… our content was great, all of it written by ‘credentialed’ experts… Google still sent us a lot of traffic and that gave us a lot of scale. That gave us a lot of data, and at the time we were still doing 60-70 million a month.”

They then went about rebuilding About.com, including a much more modern, visual design. “It did pretty well. It stopped the free fall. There was some excitement… But then nothing happened. What we didn’t have was trust. We could not get traffic and revenue to go up. It turned out we just spent 18 months doing the wrong thing, better.

“Meaning our model was from the 90’s, where scaled brands equalled trust. We were focused on the wrong thing, which was building a general interest brand like AOL, MSN, Yahoo or About.com.” 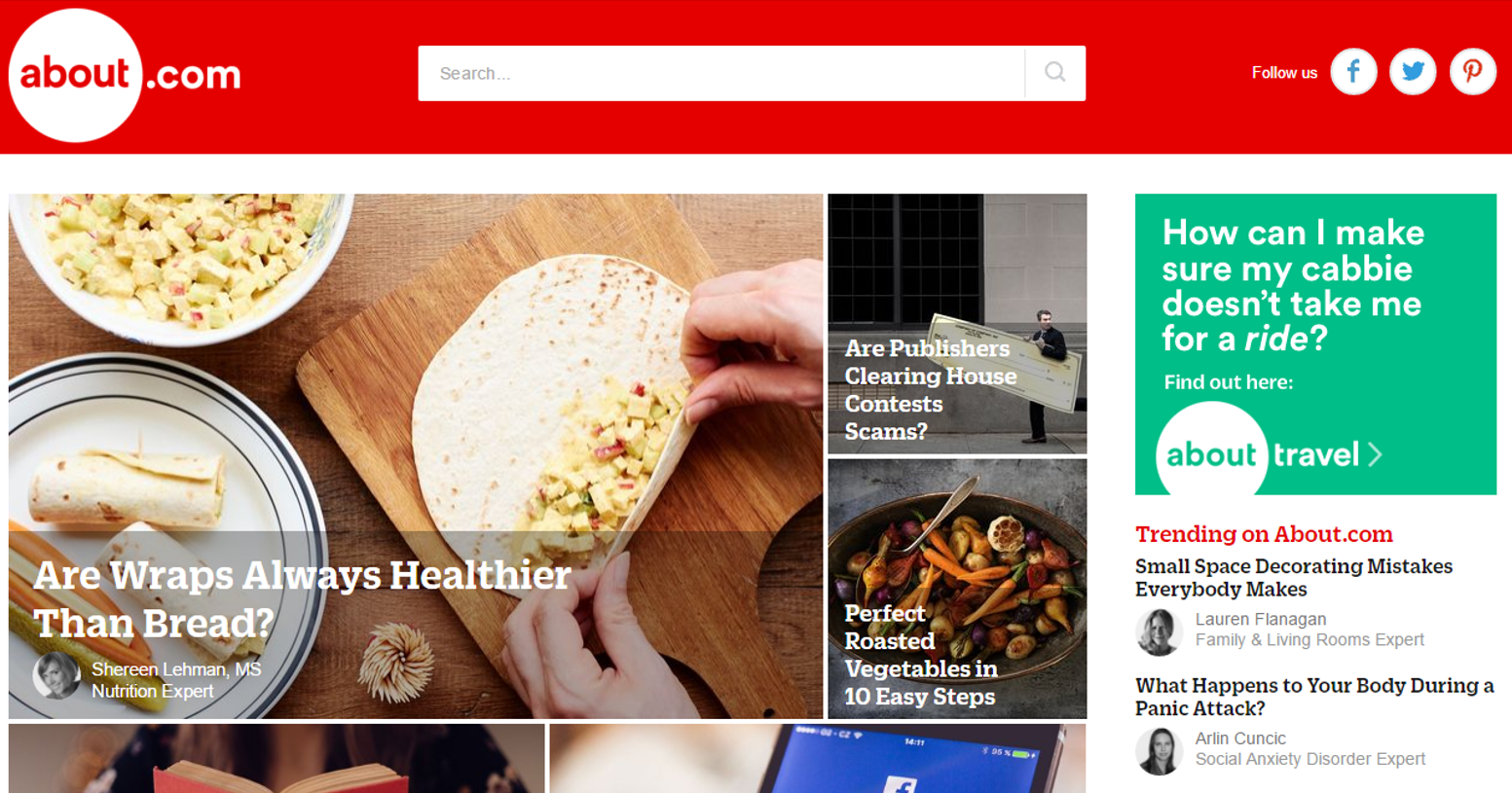 “So in 2016 we decided that we cannot be everything to everyone anymore… It was really hard for us to think that we have this brand that everybody knows, but this brand was also our handicap. We did research… like if you went to someone and said where you go for health advice we never came up. But if you say do you know About.com, they say, yes of course,” Vogel explained.

The issue was that you sometimes lose sight of “fundamentals, which is humans have to trust you. If you hurt your elbow you’d rather go to WebMD than About.com. Advertisers told us ‘we love you guys’, you have so much data, so much scale and are a totally safe environment, but we don’t know what your brand presents.

“What also happened is algorithms didn’t understand what we were, so Google weren’t sending us so much traffic anymore. On Facebook, we couldn’t get to show up in your feed even if you liked us or read a bunch of our stuff.”

It was decision-time for About.com. “The decision was we’re going to build standalone vertical brands. This is obviously not a decision that came lightly…” [But] We had premium content… and we had relative scale, so even if we broke this thing up we could still play in these spaces.

“This is where it got interesting: if you looked at our content, we were clustered in areas of great import … health, finance, tech, home, travel. And here’s the trick, which was the hardest thing, we took 20 per cent of our content and threw it into the garbage… We’re throwing it away because we’re not fashion, we’re not style, we’re not breaking news… We figured if we focus on what we’re good at, and throw away the other stuff, which was also a material part of our revenue, we had a chance,” Vogel explained.

They decided to focus on key areas. “We [would do] only brands where it matters [to the user] where you read it. [For example], It does not matter where you get the Red Sox score… But if you try to set up your kids 529 (a savings plan in the US for future college costs) it absolutely matters where you read it. And we want to be that content and those brands.”

“We now had to tell Barry Diller… this thing that you had spent 300 million dollars on buying… that we were telling you were doing fine for two years… we want to start again and start something new. This is how I explained it to him… we are going to try and unbundle this thing like no-one else has done it before.”

“For nine months we stopped doing anything to figure out how we were going to launch five new brands in 12 months… with no going back. Most internet things you can reverse, but this wouldn’t be a reversible thing,” Vogel said. The results are encouraging.

• In April 2016 they launched Verywell (an everyday health brand) with 12 million uniques. By January 2017 it had 17 million uniques according to comScore.

• Livewire (untangling tech) launched in November with 3.3 million uniques and by January had 6.6 million uniques. Vogel and his team realised, “We know what were doing. This is actually working!

• The Spruce (homes) launched with 8.4 million uniques in February this year and has had 30 per cent growth in the month and a half since then. “All of the things people thought were disadvantages, we made our advantages. Like the 20 years of content and data – we kept what we wanted and dropped what we didn’t want.” 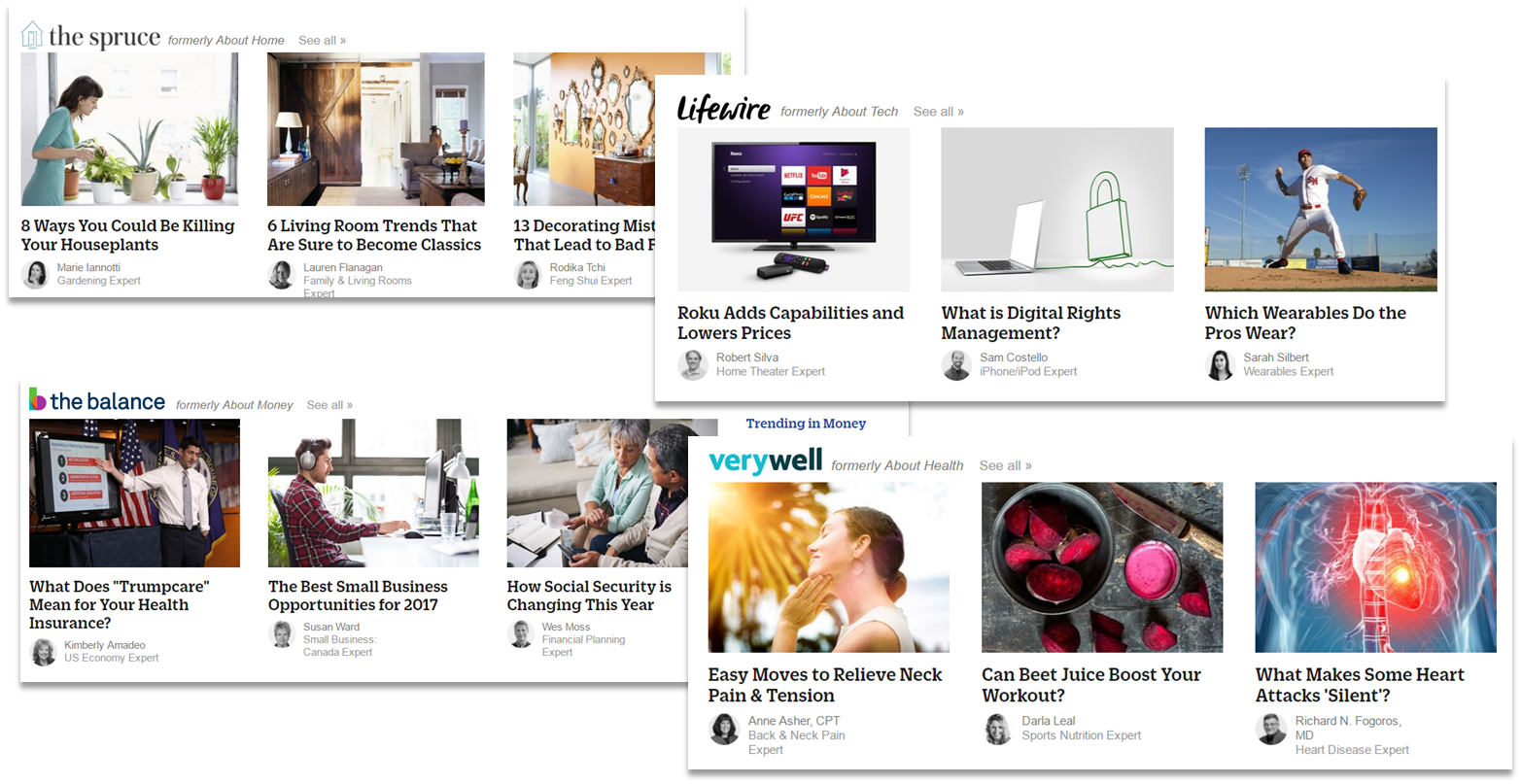 “Each of our (launched) brands are a comScore Top 10 brand and the fastest growing in the category where they track us,” said Vogel.

The final act will be to change the name of About.com as business brand. “It’s not that we don’t like it, but we need to be much more like a Vox, or a Meredith. We’re going to be like Condé Nast, Hearst. What we’ve done is we’ve figured out the Internet has changed and we need to change along with it.”

The key to this is developing vertical brands people, advertisers and algorithms can trust.