First up was Ole Petter Pedersen, news editor at Kommunal Rapport, who began by explaining that the company’s specificity was a wholly positive thing for development: “Our revenue seems small by international standards at around EUR 3.3 million, but our niche – covering local governance on a national scale – means we have a very strong readership in Norway.” 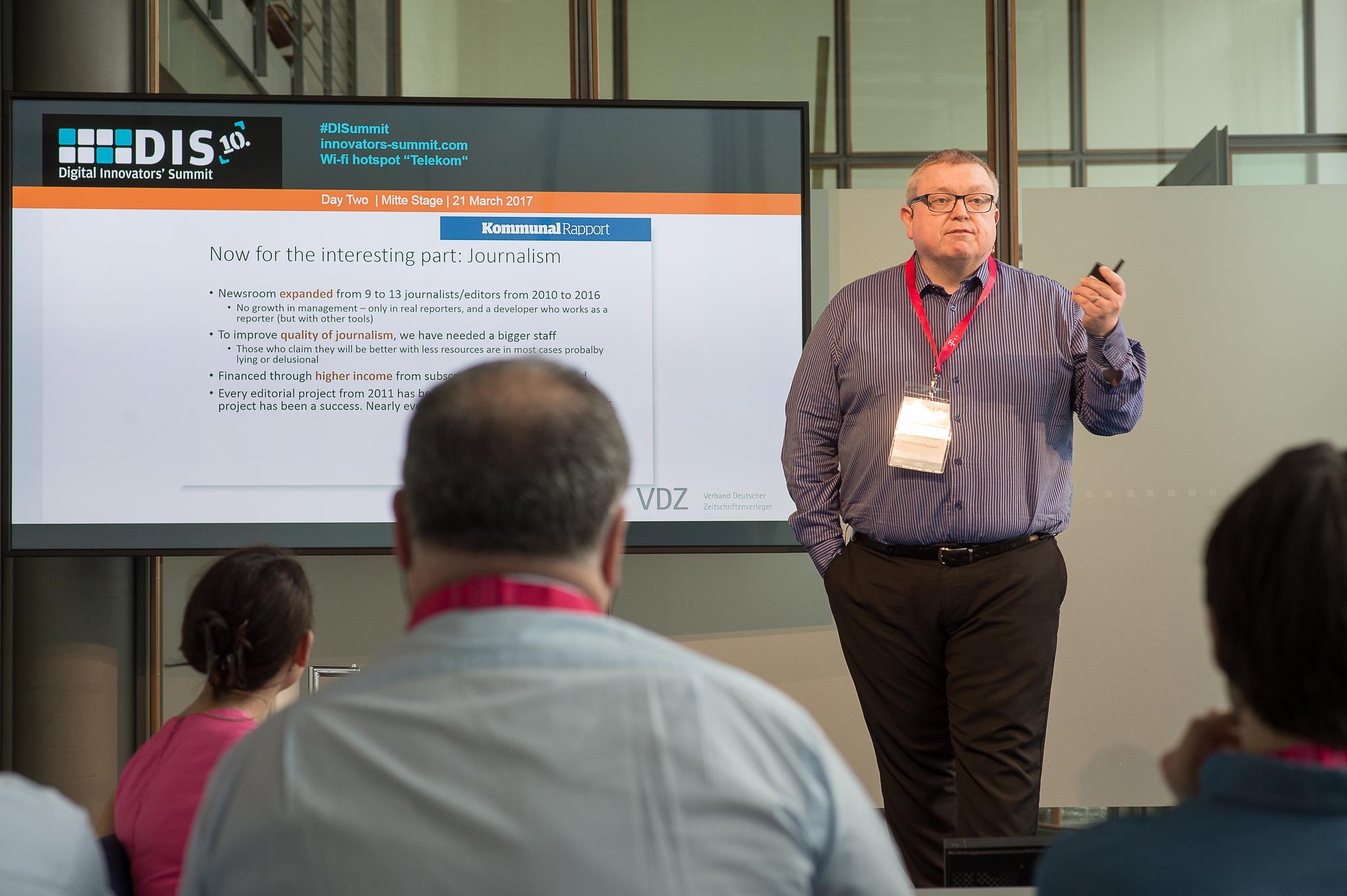 This readership is made up mainly of local executives and politicians. Since its founding 30 years ago as a biweekly newspaper, Kommunal Rapport has grown to have a dominant digital presence, and in 2017 most of its digital products are impossible to replicate in print.

Between 2010-2016, Ole said, digital business has increased by a staggering 396 per cent, and 38 per cent of total revenue is now digital. “We put all our resources into journalism – good quality journalism can be monetised,” he said. As a result, Kommunal Rapport has won five major national awards for journalism in Norway.

They make use of big data to reveal what’s happening in niche markets, and employ highly specialised journalists: “no one can be an all-rounder any more in this complex world,” Ole said. “The devil and the story is often in the details – and detailed journalism done by intelligent reporters creates willingness to pay. Big data is not interesting unless someone can extract the story from it – that is what good journalists do.”

One of the case studies Ole drew attention to was Kommunebarometeret, in which Kommunal Rapport used automation to rank all municipalities in Norway on a variety of factors and put the resulting data in the public domain. “Even those who are ranked in the low numbers want to use our products, because we provide an editorial stance and do a more rigorous analysis than their consultants,” he emphasised. This is an ongoing model for Kommunal Rapport – their automated products create stories, and they can sell the data.

Looking forward, Ole highlighted the company’s desire for more huge data sets that provide overview and insight. “We want new ideas about how to use digital technologies in order to uncover the truth about public management and spending of public funds,” he said.

In order to do this, specialist journalists are needed with data competencies: “There is little space in the newsroom for those who can’t handle huge pieces of information and provide the reader or user with context and clarity,” Ole said. “It’s unlikely I’d hire anyone who doesn’t have some kind of data skills.”

Furthermore, Ole pointed out the advantage of having a niche: “It’s much better for us to have as close to 100% readership as possible, than reaching as wide an audience as possible,” he said.

And finally, he urged his audience not to talk down the journalistic project, and to embrace digital: “We do great work. We sell our content way too cheaply in this industry. We need to value journalism again. And we want to create more journalistic projects which are all digital – because we’re not that traditional media company any more. We love digital.”

City Magazine’s Ilkka Lavas: “Fail fast: you need to know within six months if something will work or not”

After Ole’s fascinating discussion, the young Ilkka Lavas took to the stage. A serial entrepreneur and publisher, he works with City Magazine, Improve Media, TableOnline, and EatAndTheCity and has been rewarded with explosive growth. Four years ago, Ilkka bought the 30-year-old legendary City Magazine Finland when it was close to bankruptcy. Impressively, he turned it around by focusing exclusively on digital and it is now worth over EUR 100 million. 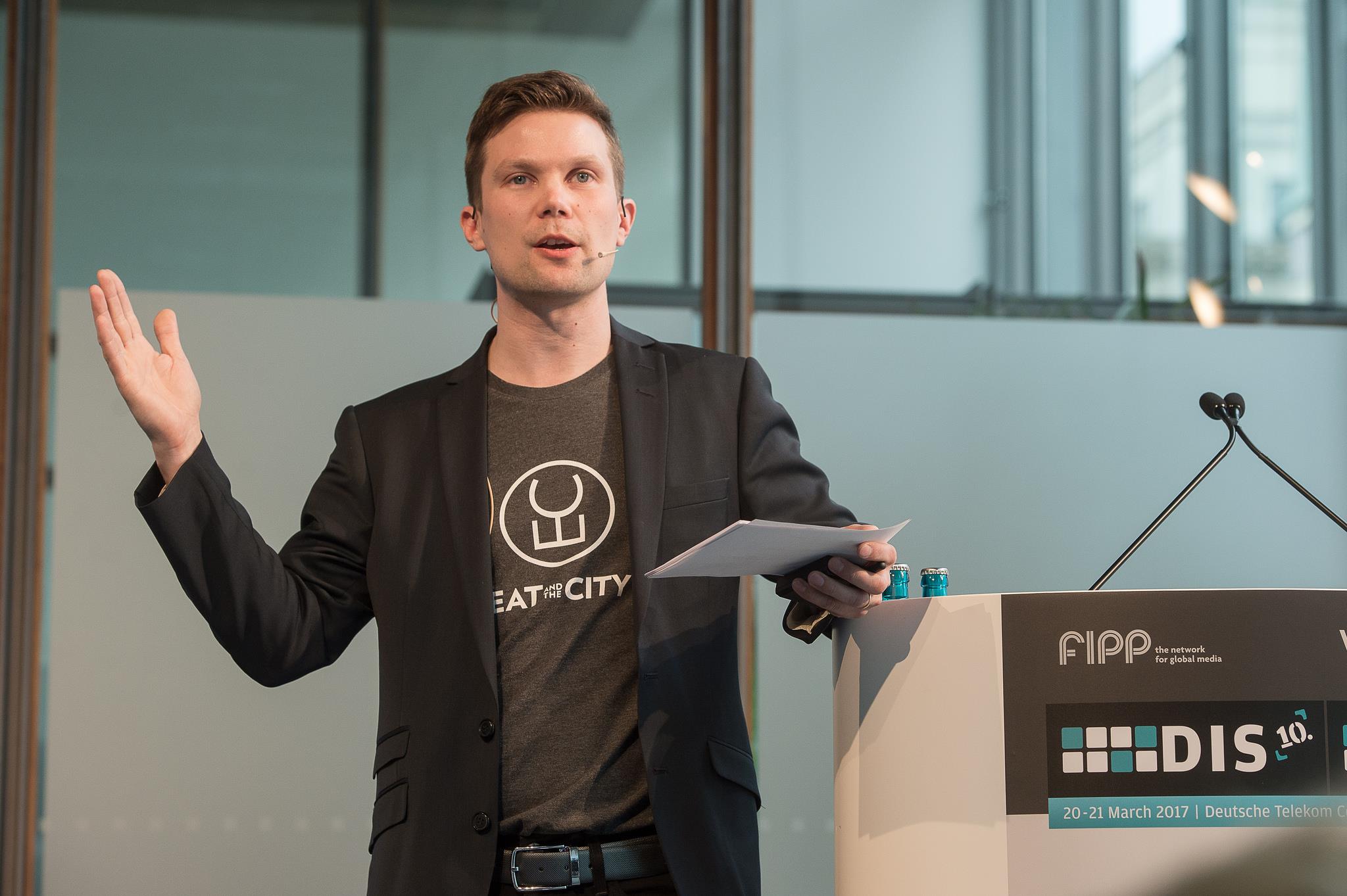 Ilkka has worked in digital innovation from the beginning, when he was just 17: “We invented an online dictionary in Finland before Google translate existed,” he said. But, he has also learned from previous failures: “If you want to be successful, you have to be the best.”

After shutting down the print business at City Magazine, Ilkka followed a “reset and rebuild” mantra: culture, sales models, revenue streams, everything had to change. “For example we don’t do clickbait, we do quality content,” he said.

This year, City Magazine will generate EUR six million in revenue across three countries, with revenue streams including its digital magazine, the monthly fee paid by restaurants to be featured, a percentage of the one million table reservations made through the magazine, and also advertising and native ads. “But we have bigger dreams! We have 20 years of vision forecast ahead, for all our businesses,” said Ilkka. “We want to be in 500 cities around the world delivering EUR 700 million in revenue by 2037.”

In order to replicate this success, he recommends media companies challenge their existing business model, try out new ideas, have an external focus, and learn quickly from mistakes. “Urbanisation, digitalisation, VR and AR all represent threats and opportunities for us,” Ilkka said. “I advise people to test ideas early: don’t wait for perfect. When you send your child to school, you don’t expect them to be whole before they go. They go to school to learn and develop – it’s the same with new ideas.”

Be willing to listen and change

1. The customer is always number one.

2. Constantly listen, learn and improve: “Millennials expect us to constantly be improving, anyway,” he said.

3. Never settle: “New business models can make you better than the old one ever could. Be prepared to give autonomy to your digital teams – this is really important.”

4. Fail fast: “you need to know within six months if something will work or not,” said Ilkka.

5. Never think you have all the answers: “Be humble, ask others. Leave your office, get out there.”