The die-cut cover opens up to reveal different “stops” readers may make along the famous route, as well as tips from RV bloggers from across the country. An RV image appears on each piece and partner GoRVing is called out on the outside cover page. 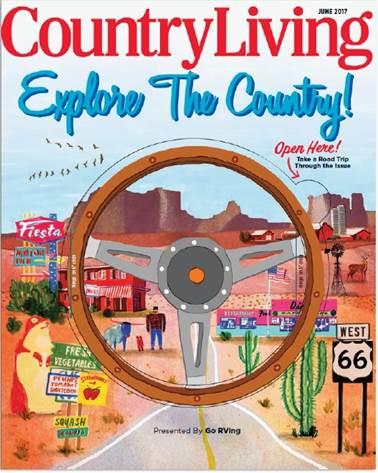 The June 2017 issue of Country Living also features tips on lifestyle and fashion while on the road, homes, recipes, pets on the road, and coast-to-coast summer travel features.

The die-cut wheel idea originally came from EIC Rachel Hardage Barrett, and with the help of Country Living’s marketing team, they curated the idea to what could work from a printing standpoint, explained associate publisher Michelle Balaz. A die-cut hadn’t been done before – it was a first for Country Living, and a first for the production and printing teams. “Our printer created this die-cut from scratch, a first, uniquely for this cover unit – exclusively for Hearst and Country Living. It has never been done before – this was a first on all levels,” she said.

The cover’s illustration is a road scene, inspired by traveling on Route 66, an iconic American highway which ran through California, Arizona, New Mexico, Texas, Oklahoma, Kansas, Missouri and Illinois that has inspired writers, musicians and films.

“Holly’s whimsical illustration style perfectly captures the fun, wanderlust-y spirit of the second Country From Coast to Coast issue, which is essentially an exploration of country style in every state. Throughout the issue, readers can “brake” for antiques, local eats, and other regionally inspired content while GoRVing provides fun native “exits,” also illustrated by Holly, along the way,” said Rachel Hardage Barrett, editor-in-chief. “At a time when the nation can feel so politically divided, it’s refreshing to celebrate the country in such a unique way and to steer (heh) the conversation in a more positive direction.”

Wales’ style and imagery worked well with Country Living’s editorial approach to their second Coast to Coast issue. “The client (GoRVing) absolutely loved Holly’s creative style in regards to the cover unit and her creative interpretation of the native integrations running throughout the magazine,” Hardage Barrett explained. “We wanted the RV lifestyle to literally travel through the pages of the magazine and Holly brought that to life.”

Wales, a UK-based illustrator, worked closely with Country Living’s Art Director Erynn Hassinger to evoke an imaginative and nostalgic snapshot of road trips in the US which you might take with an RV, she explained.

“I thought a lot about the idea of taking road trips for pleasure; often it’s a holiday which people might have saved for a long time – a honeymoon or a special occasion. I wanted the illustration to feel packed with interesting details and surprises; the same way you keep winding down the window on the road to take a photograph because everything is a novelty to look at,” she said.

According to Wales, the cover illustration meant telling a story in greater detail. “I thought about the road as a visual journey to take the viewer’s eye across the page and also through the landscape,” she said.

And, Route 66, called “the quintessential American road trip,” has nothing if not scope for the imagination, with its vintage motels and roadside diners, and legendary history.

“To me as a British person from a small island, Route 66 embodies a nostalgia of epic proportions when it comes to the idea of US road trips – I love the idea of travelling across a landmass as vast as the US in a virtually straight line,” Wales said. “And, the landscapes in in California and Arizona in particular reminded me of a trip I had done myself several years ago whilst visiting Los Angeles. I love all the roadside diners, gas stations and signage you get at the roadside in the US, and I wanted to include as much of it as possible to bring the road to life.”

The special cover project partnership began several months before, according to Balaz. “High Impact Cover units and integrated ad programs are a unique opportunity for clients and their agencies, so the conversations start on units like these at least 4-6 months ahead of the ad closing dates for any given issue,” she said.

“With our client Go RVing, everything began to move forward at about six months before the June 2017 issue ad close, literally around October 2016. In January 2017 we began fine-tuning—from the creative process, to production and finally working closely with our printer—this project truly took a village and a lot of collaboration on between our team,  the agency and the client.”

Special projects like this cover are an opportunity for a print media investment to work harder, Balaz explained. The die-cut and illustration go a bit further than a regular cover to engage audiences and guarantee interaction with the brand. She said it was exciting to be able to offer their audience something they’d never done before and at the same time, guarantee engagement for their clients. 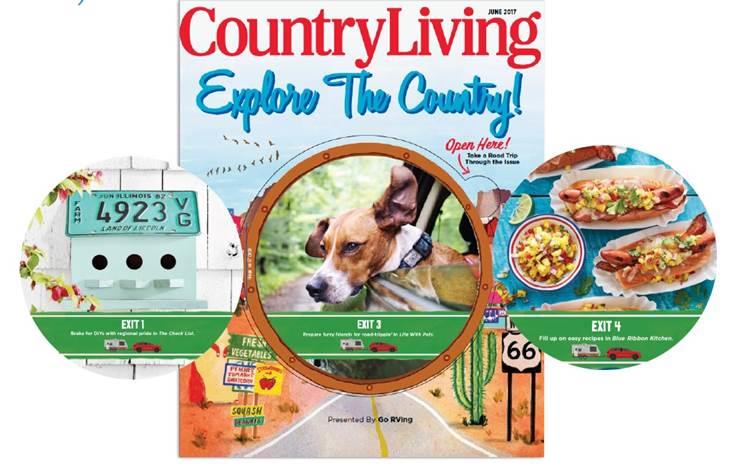 In creating and producing such a unique project with technical challenges like die-cuts, Balaz suggested communication was important. “Keep everyone in the loop, constantly double check everything and pay attention to all the details,” she said.

“Challenges will present themselves, that will happen, and the more informed the whole team is about everything, the faster those challenges are resolved. Patience and a collaborative flexibility is key from everyone. It worked because we were all in touch constantly and understood that everyone’s perspectives had to unit to make it all happen!”