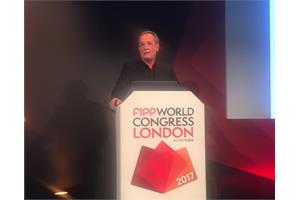 “No other industry predicted its own doom as much as print media. The magazine is not dying, but it may be killing itself.”

Walter Longo joined Abril Brazil as president. His team explained that print was over and that digital was the future.As Walter told the FIPP World Congress in London, he had a very different perspective on the future of the company. He believed there is a synergy between print and digital and the two can nourish and revitalise each other. Both have a key part to play in the future of the media.

Walter was also convinced that in the post truth (fake news) era print companies now have their biggest opportunity in decades. However to capitalise on this media companies need to focus on thinking strategically.

He then explained to the delegates the guiding principles for transition, and how successful they have proved to be so far for Abril Brazil.

“Managing is about wisely defining time between what’s pending and what’s trending,” Walter said. “But pending issues push people away from analysing the trends. “We often default to a short term vision. We are more concerned about the end of the month than the end of the world,” he said.

Walter then outlined how the company created five core beliefs which provide the guidelines for its strategic vision.

We need to understand digital is an addition to a publishing company and not a substitution -  In other words digital and print are  complementary. Digital media addresses ‘what and when,’ print media answers ‘why and how.’

For Abril Walter explained that they had agreed that ‘what and when’ would be available freely, but consumers should pay for ‘how and why.’

Walter then gave an example of how digital could be complementary to print media and indeed help drive subscriptions and open up new revenue streams. Abril launched ‘Mobile View,’ which is an augmented reality tool. Rather than it beign a one-off gimmick Mobile View works with every issue of some of the company’s magazines for example, enabling readers to point their phones at the site and watch a video which enriches a story.

As Walter explained Mobile View has partially been responsible for a growth in print magazine subscribers, and the number is now similar to where the company was five years five years ago.

The AR innovation also enabled the company to produce lots of videos, which also helped to develop the company’s digital channels while offering video ad opportunities for brands in print.

We need to use our media not only as an end, but also as a means -  Walter illustrated this by talking about how Abril had developed a series of ecommerce related revenue streams.

He mentioned Gotoshop - which delivers ecommerce in print magazines. Consumers can buy straight from the print magazine using AR. If they focus on a product image using the app they are taken to a retail page. Another innovation is the creation of membership clubs which operate in niches like wine, beer and food and combine products with copies of magazines to subscribers. Walter said that this was a rapidly expanding sector and that Abril were adding two or three clubs every month.

The growth of these types of products has lead to a perception change of the business among advertisers, who Walter says now see the company as a business partner for multiple business opportunities.

The growth of the business has also impacted on the advertising bottom line. By delivering ‘media for equity’ and delivering ad spaces that promote internal products programmatic ad supply has been cut by 35 per cent yet CPMs have increased by 120 per cent.

More than a house of media we are a house of brands - As Walter underlined this is a big shift in mindset. “We have 30 different magazines, but need to consider them as brands and what can we do with them, whether that be concerts, awards, video, exhibitions apps etc. It requires a different mindset.

Lower walls without losing credibility - Reducing the distance between editorial and sales, transforming storytelling and creating story selling. This is all about creating compelling, but non-obtrusive branded content.

The creators culture must prevail - According to Walter “All successful companies have a human face now.” And to illustrate his point he cited Tesla and Elon Musk. “We need to make editors protagonists, to introduce ways to promote editors as celebrities,” he added.

Walter concluded by saying “revolution happens not when we adopt new tools, but rather adopt new behaviours.”

The value of paper