Mid-October, The Financial Times launched a small consulting firm using its own in-house talent and learnings from it's own successful transformation, aiming to help other media and media-adjacent business. The consulting firm, FT Strategies, draws on the FT's data scientists, product managers and digital experts, and uses the FT’s deep experience and expertise in data and technology, to help organisations build successful customer-focused businesses.

FT Strategies was officially launched October 23, though FT Chief Data Officer Tom Betts explained the service has been working in beta for 18 months.

The idea for FT Strategies stemmed originally from a curiosity about whether The Financial Times could commercialise some of their proprietary data technology, Betts explained. “We started exploring that possibility, but actually in the process of doing that, found what we believe to be a more relevant market opportunity, which is actually helping businesses in some of their technological struggles, agnostic of the technology and the technological approaches. In the early conversations that we had with prospective customers, we discovered that many of their biggest challenges in developing data capabilities were in fact not technical but instead were commercial, strategic or cultural. While once a challenge, we believe that technological constraints should no longer be the bottleneck in achieving your growth ambitions - or if they are technical then the challenge is how to assemble their ambitions.”

The new consulting firm was based on learnings that the Financial Times had built over the years, and helped similar businesses. “Could we use those, taking them out to other businesses - would they translate and transfer?” Betts asked. “What we discovered in our market testing and in our early work is that they absolutely cut across to other business. The early clients that we worked with have successfully implemented many of the things that we worked with them on.”

The biggest challenges businesses have in the media space who are pivoting to a new model, are cultural and organisational. Businesses have to think about how they operate in new ways, adopting new data rich, and digital working practices, and how those practices are going to affect their employees. What do they look like? What do they feel like, and what does it mean for me? How will my job change as a result of these changes?

“I think it's common that people find that organisational and cultural changes are difficult to overcome, because I think most people are pretty wired not to naturally accept change,” Betts said.

FT Strategies takes a different approach to the consulting business, by using stories, insights and best practices from inside the FT as a live case study. Since 2007, The Financial Times has been in a state of transformation, from an advertising-based print publication, to a subscriber-first digital news service. The learnings from this transformation are on tap at FT Strategies, to help other organisations build long-term relationships with their customers.

“The living case study is all about effectively saying, you can come and have a look at what it looks like to have gone through this transformation over the last 13 years or so, come and see people who are like you,” Betts said. “It's not a theoretical case study on the pages of a business textbook about digital transformation or theoretical tools that consulting firms who have theorised are the right things to do. It allows customers to actually come and see it in practice.”

The living case study creates an opportunity for people to reflect on their own practices, to see and hear about some of the things that have driven success at The Financial Times and use that as an opportunity to challenge themselves, Betts said.

Betts explained FT Strategies was an attractive business proposition to explore. “We believe that the expertise that we have gained in growing direct to consumer revenue through the intelligent use of data has applications far beyond the most immediate... Clients for whom our proposition is most salient are ones that can see direct links between their own business and the successful transformation of a traditional wholesale business to a modern, digital and direct to consumer proposition.”

Target markets for FT Strategies are media in the broadest sense of the definition (and) businesses that are making use of media, like the education or automotive sectors, he said. FT Strategies already counts a number of diverse and successful organisations as clients, including Bonnier, The Business of Fashion, Penguin Random House, and the V&A, according to a release.

Betts explained that FT Strategies' impact and opportunities to expand to other industries is not limited, saying, “I think it may take time but I am confident that we will  build credibility in sectors which are really far away from where we are today.” 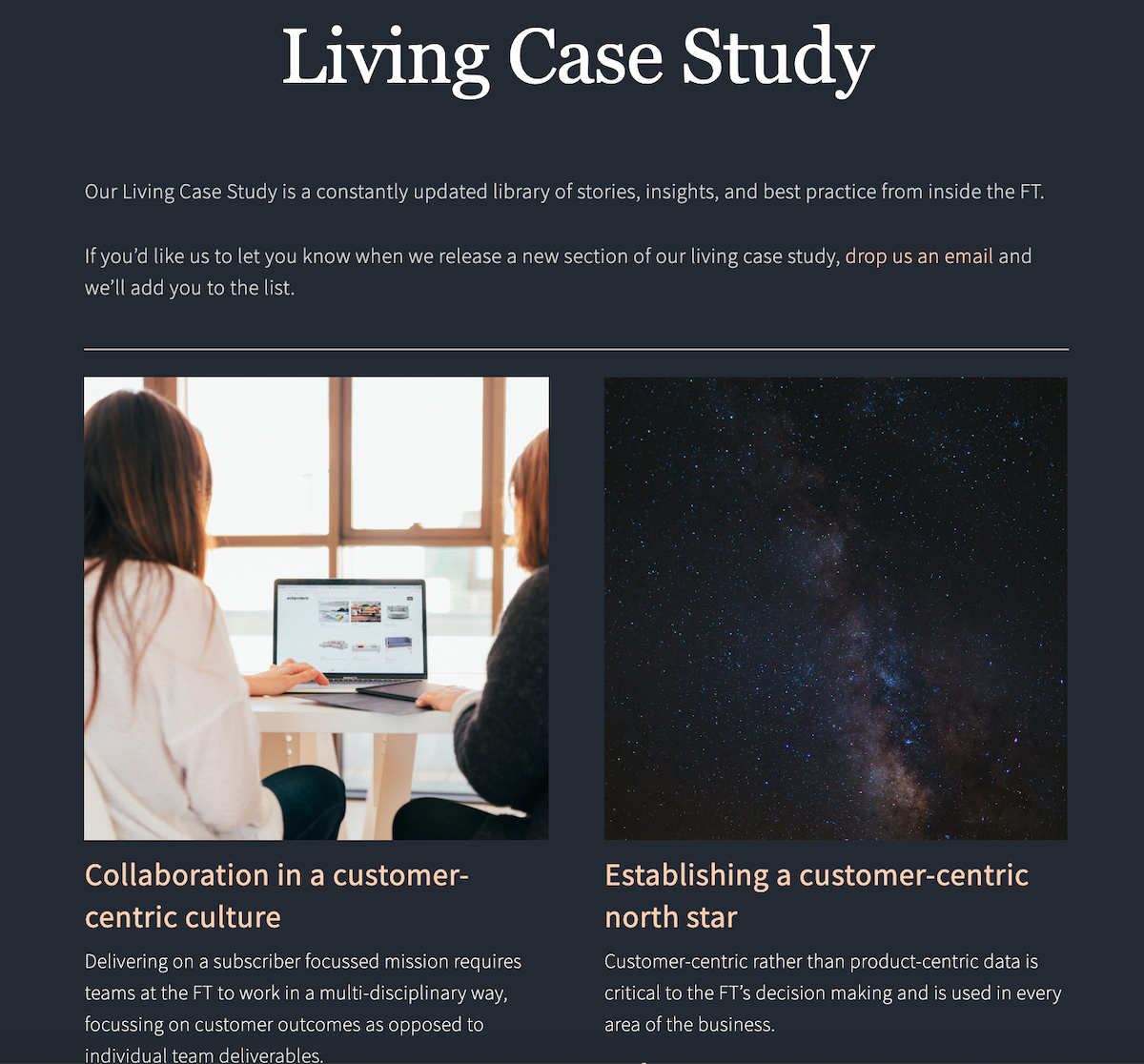 Building off The Financial Times' success

The Financial Times, a 130-year-old global business news organisation owned by Nikkei Inc., has been called “a paper with a plan.” Circa 2007, the news media brand  pioneered a metered paywall and focused on a subscription-based business model. Over the course of the last decade or so, Betts explained that the Financial Times' business model has been transformed.

In April, The Financial Times surpassed their own goal and hit a milestone: a paying readership of one million, three quarters of which are digital subscriptions. At the time, Lionel Barber, the editor in chief, tweeted about it:

BREAKING news: it’s official. The Financial Times has passed the milestone of 1m readers - one year ahead of schedule. Congratulations and thanks to my brilliant journalist colleagues #pink #champagne pic.twitter.com/nXrcMMvkZB

“It really surprises people when, when I tell them, of all the people who pay to read the FT, more than 80 per cent are paying to read it digitally, and print is the now the minority of the readership,” Betts said.

While The Financial Times' business is firmly rooted in a subscription-based business model, FT Strategies provides an additional stream going forward. The success and stability of the Financial Times' business model, that confidence, means that as a business the FT is able to prioritize and focus on making engagement a business-wide imperative. It is the FT's strong belief, and indeed, Betts', that businesses can benefit from the growth of direct to consumer relationships.

“One of the key things which has fundamentally changed the FT is the understanding of audiences in ways that we never understood previously. In the print world or in any other business where you have a wholesale relationship with your customers, the opportunity to get feedback from your customers is limited,” he said. “You can do it with research and surveys, which are expensive,not necessarily representative and not immediate.  What we have seen is the more we have been able to get under the skin of understanding our customers, the more we've been able to bring them front and centre into our thinking as a business.”

Betts explained for the FT, being future-proofed involves the ability have a deep understanding of customer needs through these direct to consumer relationships. And, thus, the ability to change course accordingly as and when consumer behavior and interest levels change,  and the ability to use that data to innovate, to test and experiment with new things. That level of insight - which has helped the FT to be successful to date and scaled to these levels of paying audience and building a very successful digital subscription model – will be just as relevant for other businesses in their transformations, he said.

In 2009, one of the things Betts noticed from his first day at The Financial Times, was direction from the leadership team to focus on subscription growth. “I looked at subscriptions and realised that it was only a small proportion of the revenues, and asked should we not be focusing on scaling advertising, given that it's the predominant source of revenues?” he recalled.

But, the leadership team, at the time, had the foresight to say no, to double down on a new subscription-based business model. Betts says that was a bold thing to do. “That's the sort of decision making that is very important, for businesses that are going through this sort of transformation,” he said. “You've got to have conviction in the direction you're going and then double down and get on with it.”

For businesses in the beginning, middle, or near the end of a transformation process, it can sometimes be overwhelming to think about the amount of new technologies they have to invest in, to make the most of new models, Betts explained. But, it can be really easy to procure the technology.

“The areas to focus on are on the people and the process,” he said, adding, “And, being really clear and focused about what you're trying to get into, because it's that focus which is critical in moments of change and transformation. Aside from that, continuing to have conviction in the value of the products that we build is really important. At times of change you cannot rely on the past to set the future.”