Joe Media is achieving online success in long form content, in an industry increasingly focussed on short form snacking. FIPP sat down with Joe Media founder, Niall McGarry and Unfiltered host, James O’Brien, to talk about the strategy behind the brand’s success and some of the wider media-tech trends coming into play within the industry today.

To call Unfiltered a podcast would be to slightly underplay the show’s full offering. Launched in October 2017, Unfiltered went straight to Number 1 in the Irish iTunes podcast chart, Number 2 in the UK chart, and now sees its overall audience growing by 10 per cent with every weekly episode. A video version is available on YouTube and across Joe Media sites, with short-form segments regularly adorning social platforms such as Facebook and Twitter. It’s a quality, original content play that is distributed intelligently online across a joined-up digital publishing process and with full episodes lasting an hour, Unfiltered is demonstrating that you don’t necessarily need to focus on quick hit, short-form, ‘tag a mate’ style content to achieve success online.

Joe Media is part of Maximum Media, the company founded by Irish entrepreneur, Niall McGarry in 2010. FIPP spoke to Joe Media back in 2017 about the formula required to produce successful and sustainable video content online. By October of last year the company had clearly begun to implement this strategy even further when the first episode of Unfiltered, hosted by James O’Brien and featuring Russell Brand, was aired.

“We’d come across James through his fantastic almost rant-like LBC Facebook videos,” says Niall McGarry, founder and owner of JOE Media. “He was very much the voice of Remain [in the UK EU Referendum] and the voice of sense, and Joe felt he was interesting. But then you start to look at the existing interviews with high profile individuals out there – like Gary Lineker, like Paris Lees, etc. – and they’ll often come on for literally eight minutes, plug a book and then leave, and you’re left with no real concept of who that individual really is. So we looked to James as a respected interviewer to bring people to life. We then looked to get 45mins – 1hr with these individuals and find out for example how Gary Lineker, a footballer from the 1980’s, has become the voice of liberal Britain and a voice for refugees.” 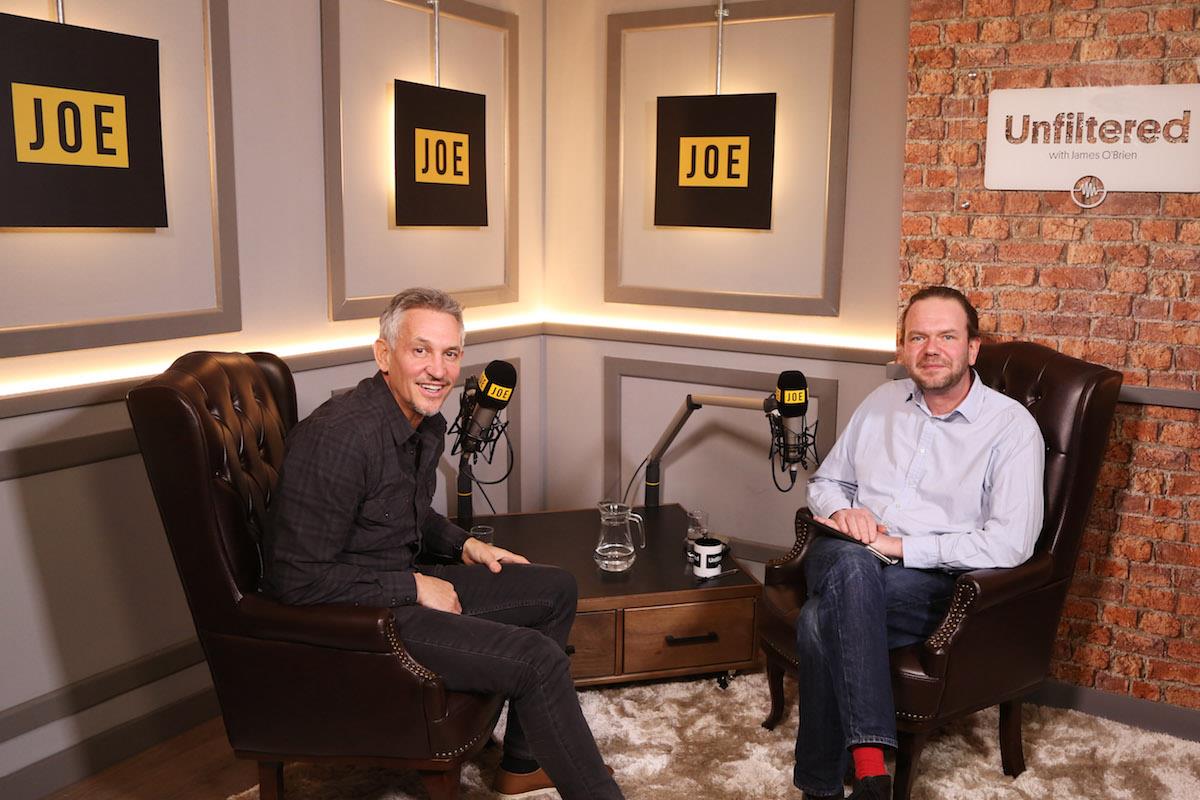 Speaking from what you might normally consider a more commercial perspective, Joe founder Niall McGarry’s commitment to quality content is refreshing, and a timely reminder of where the long-held strength of traditional media emanates from historically.

“I don’t think we have reinvented the wheel,” said McGarry. “Since starting Unfiltered a lot of people have said that they didn’t expect this sort of thing from us, but my answer to that is no, you didn’t expect it from a new media outlet. Because up until now new media outlets were known for cat videos, dogs on treadmills, etc. Whereas this is essentially a traditional format and I think that traditional media does a lot of things really well. So what we’re trying to do is take the traditional format and do it well on digital.”

In an age when there is no set roadmap for digital media success, the Unfiltered concept has in-part grown up organically through the emergence of new media trends. O’Brien’s presence on the show has been one of the key catalysts for its success. His LBC radio show remains one of the few places in UK media where a populous increasingly polarised by online echo chambers can go for open debate in a troll free environment. But he points out that the success of this more traditional radio content across multiple formats did not necessarily stem from a conscious effort to evolve the medium.

“I’d love to claim it was part of a master plan, but these viral clips based on my LBC show were pretty much accidental,” highlights O’Brien, “We hired a fancy studio, only because the building I work in is full of music radio stations. So I think the initial idea was that if a Liam Gallagher or an Olly Murs came in for an interview the intention was to film those sorts of interviews in HD and those clips could challenge the TV stations. But what oddly happened is that it was the journalism, the clips of the speech station, that ended up going viral to the tune of three, four, five million. And that has focussed attention on radio, but it hasn’t changed the way we do radio. With the short form clips we are drawing in an audience towards the more long form content.”

“The thing is when new stuff happens – because I am old media really - there’s a tendency for old media people to think that it’s going to replace, but actually it’s not it’s going to exist alongside. So in a way perhaps the prominence that was originally given to short form content was precisely because you could only do that type of content online. But in the case of long form content, that works on both so they’re not going to squeeze each other out.”

Social media is an interesting area for the Unfiltered and LBC host. On the one hand, as he references, such channels have opened up traditional audio content to wider online audiences – the latest Rajar figures show a 9.5 per cent increase in LBC 97.3 listeners to 1.2 million in Q4 2017.

However, the growth of social conversation around media content has also brought numerous challenges to the industry and increasingly directly to the journalists operating within it. Trolling and fake accounts are becoming an increasing problem, while an unsettling thirst for ‘alternative facts’ brings the danger of eroding media trust. So ultimately, does O’Brien see the current social landscape as being a help or a hindrance to traditional media?

“I think social is magnificent and I barely acknowledge the downsides,” says O’Brien. “But there’s two problems with me answering that question: The first is that I’ve got skin like a rhinoceros. The second is that I don’t see a lot of it anymore. Because with quality filter, muting, and blocking, while other people might see a lot of the responses from the usual [negative] respondents, I don’t always see a lot myself.”

“I don’t know how much of it is human. I was a little naïve with regard to the astroturfing, the bots and the orchestrated practices, certainly in relation to Brexit. I’ll tell you when I realised something weird was going on: Bill Browder, who has been a guest on Unfiltered, is obviously one of the Kremlin’s enemies. The female lawyer who met with Donald Trump Jnr. (all of which is still under investigation by Mueller, but that bit of it we know is true) tweeted something about my radio show, which is when you begin to wonder if maybe there are forces at work with the trolling and the nasty side of social that we’re yet to work out.”

“The thing that worries me, and this is why I mentioned having rhinoceros thick skin, is that it’s a bit like politics. People can be put off going into politics by all of the abuse and intimidation that politicians receive. What kind of person is going to be attracted to doing this job if you’ve got to have rhinoceros thick skin to do it? And social media also perhaps deprives people of room to change their minds about stuff, because you have to start shouting the odds right from the get-go. But again it’s all evolving, and the idea that everything is now set in stone and it’s going to be like this again for the next ten years is the biggest mistake anyone can make I think.”

In many ways that evolution is key to the success of modern media companies. Anthropological issues aside, social now presents a powerful distribution channel for publishers across the spectrum, no longer the preserve of the news and current affairs sectors. Staying up-to-date with the changes to these platforms is key, and FIPP recently reported on how the ongoing changes to the Facebook newsfeed would likely affect traditional media owners. For the Joe founder, the potential impact of these algorithm changes has been overstated. 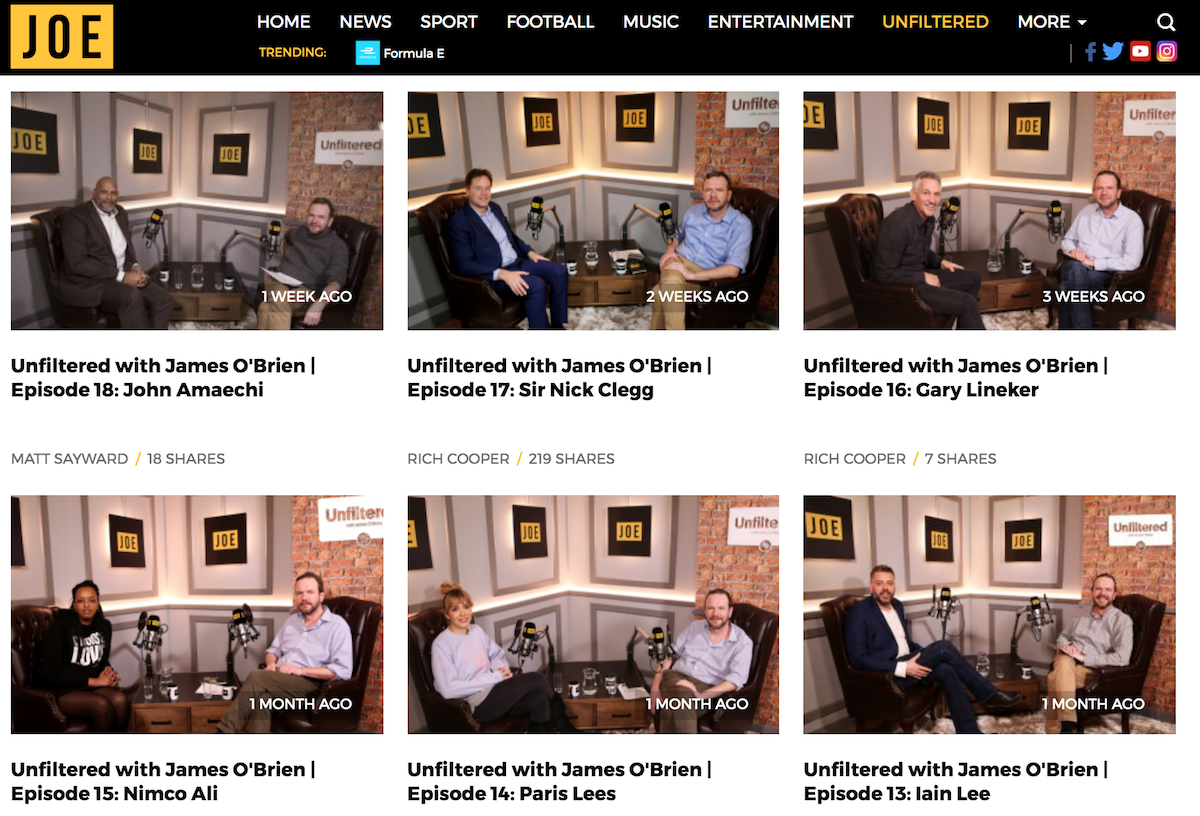 “I think they have a very specific agenda, which is for Facebook not to be the home of hate,” says McGarry. “Hate and fake news are huge threats to their perceived ethical standpoint and to their business model. I think that it has been massively overhyped. It’s unfortunate that Mark Zuckerberg came out with a wide, overreaching statement, and then largely dialled back saying OK well we are going to prioritise ‘trustworthy’ sources, now we are going to prioritise ‘local’ sources. That’s fine, we take a very localised view ourselves, but I don’t think that ‘trustworthyness’ is necessarily the preserve of traditional media. For example if you look at BuzzFeed, I think that’s a very trustworthy brand.”

“So we have not seen a drop-off. I think what it has done is it’s meant that community management has come back much more into play. We’re going to have somebody full-time responding to our commenters on Facebook. That shows that we’re not a bot, we’re not spreading hate, or anything like that. It’s also true that Facebook is now deeming that a comment is a more meaningful social interaction than a like, because you’re really engaged.”

“The other thing here is that Facebook want to get rid of what’s called passive consumption, but they created passive consumption! Passive consumption is autoplay videos. Prior to that YouTube for example didn’t have autoplay video, to watch anything you had to press play. It started with the Ice-bucket challenge. All of a sudden you went on Facebook and everybody was passively consuming video content that they hadn’t asked to play. So they want to take that out and they also want to get rid of engagement bait. All of which is good and will promote good quality content. I had hoped it was going to mean less dogs on treadmills. Sadly I don’t know if that is going to be completely the case [while the algorithm remains the same] and Facebook do have a number of their own challenges to also address.”

Joe Media is clearly a company that has taken the initiative to address some of the challenges – and opportunities – presented by digital media in a still evolving landscape. The company has a number of new innovations coming through in 2018, which you can learn more about in the full video above. It’s a fascinating piece, and at 35 minutes in length, is indicative of the long form content that is proving so popular through Unfiltered and other offerings from the brand. As its success demonstrates, there is still a large appetite for quality, in-depth, long form media that sits not in opposition to short form snacking but alongside as a multi-platform play.

Taking the podcast to new heights - Saints of Somewhere

The New Statesman’s deputy editor, Helen Lewis on the renaissance in political podcasting