An app developed by Paris Match magazine to text-mine political speeches during the 2017 French presidential election has yielded a multi-purpose data journalism tool now being used to analyse the use of words far beyond politics.

Paris Match, the Franch-language weekly news magazine, initially developed their ‘Le Poids des mots’ (Power of Words) app to text-mine political speeches for the purpose of creating first print and later online graphics that could show readers which words political opponents used the most in their 2017 presidential campaigns. But, as delegates to FIPP’s Insider event in Paris recently learnt, the development of the app brought with it surprising and interesting alternative uses.

Once the magazine’s data journalism team realised their new app could be applied to almost any scenario where words can be mined as data, they used the app to count and analyse the words used in the lyrics from more than 30 years of number one hit songs in France, identify trends in databases of trademarked brands going back 40 years and compared the use of politically charged terms during hours of debate between French president Emmanuel Macron and the mayors from rural French areas.

By putting the app to work, it also yielded a book written by the Paris Match data journalism team titled ‘Le Poids des mots du président’ (The weight of the president’s words), which offers not only an analysis of the first year of Emmanuel Macron’s presidency but also reaction from his speech writers about the findings of the app as well as an analysis of striking speech patterns, such as the president’s tendency to blur the line between himself and the state.

Words can be mined as data

The ‘Power of Words’ project kicked off in 2016 when Paris Match’s data journalist,  Anne-Sophie Lechevallier, set out to develop a data-journalistic angle to political coverage in the run-up to the 2017 French presidential elections. She told delegates to FIPP Insider Paris she teamed up with web journalist Adrien Gaboulaud, working on the assumption that words could be mined as data. Once mined, they wanted to present their findings to readers in a way that was visually compelling in print and interactive online.

Gaboulaud explained that the initial project was built on clear objectives. “We wanted to create something that was not only innovative but it also needed to be unique to Paris Match. We wanted the project to expand our current political coverage and it also needed to be completely bimedia, suitable for both print and online.”

Both journalists made it clear that it was much harder than they imagined. The first challenge was that there were no technical solutions to buy for their project. They had to create it from scratch and as journalists, overcoming technical challenges was truly demanding. This challenge could only be overcome once a designer with technical expertise, Dévrig Plichon, joined the team.

More adaptations of the app

They also faced the reality that they needed to ‘text mine’ and analyse a myriad of political statements, speeches, TV and radio interviews, media interviews and debates almost in real time. It turned out to be extremely time-consuming. To ensure accuracy they simply could not leave these transcriptions to be done by staff of the political candidates, so it needed to be done in-house.

Once they did the analytics, they also needed to think very hard about how to present their findings in a compelling way using interesting interfaces. “This was very hard because it is the most distant task from what we were used to do every day,” explained Gaboulaud.

The first interface they created showed readers how many times each French presidential candidate used a specific word in their campaigns, where it was used, when it was used (on a timeline) and what the context of the usage was. It worked well in both print and online because readers found it interesting to compare the usage of specific words by opposing political candidates. 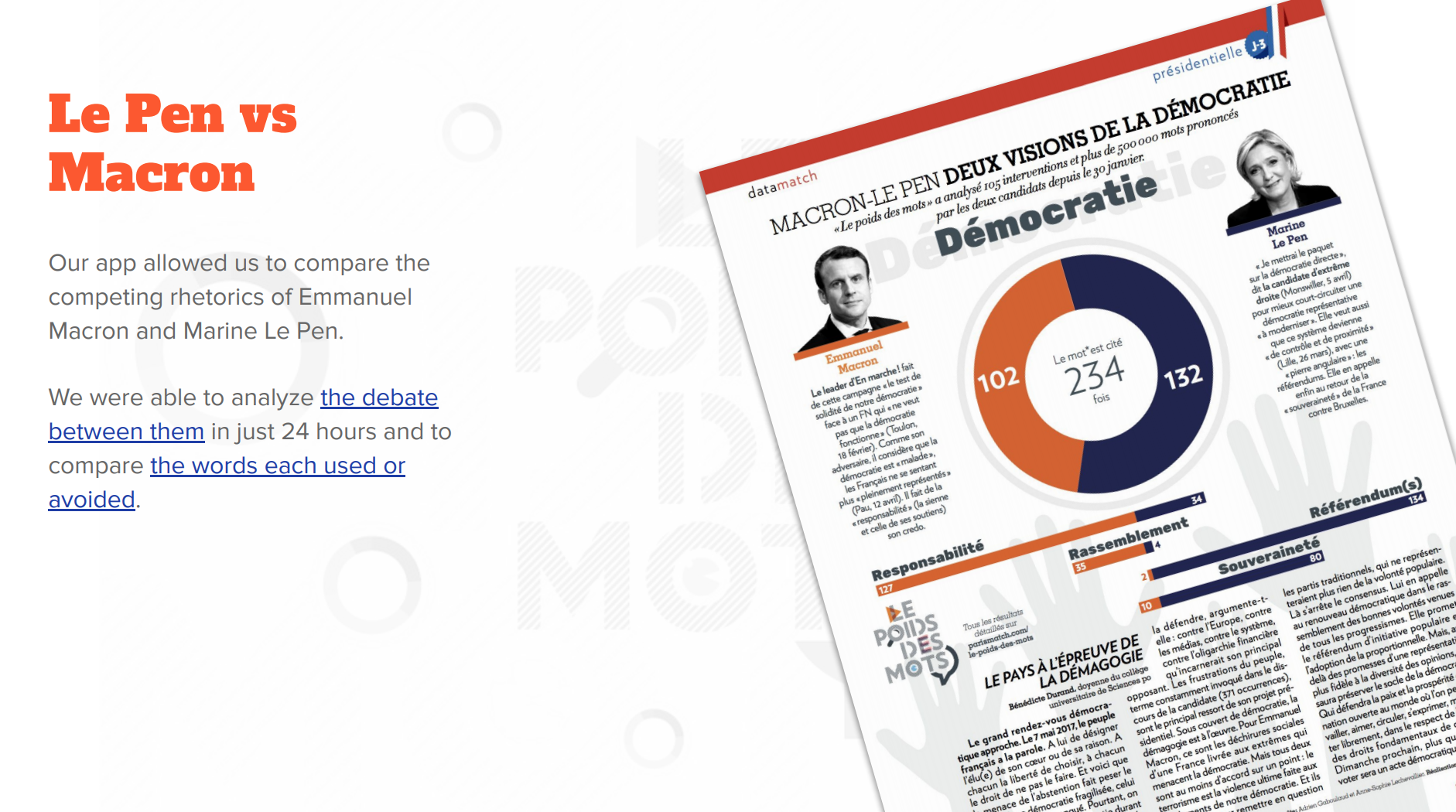 Articles based on their data

The team’s early success led to more adaptations of the app. They started to continually update their database with more recent speeches, creating better and more interesting results. After the election they continued to analyse the use of words by now-president Macron, leading to fresh content for their print and online magazine, as well the book about Macron’s use of words.

According to Lechevallier, the more they used the app, the more she realised how powerful it could be to create new opportunities. They teamed up with Google’s News Lab to discover how the words that defined the election were being used by the public online and in searches. While multiple researchers from top French universities assisted them in their methodology for accurate word counting, these researchers also started to contribute content by writing articles based on their data.

On top of this, the app is now being used by the newsroom for inspiration, story ideas, context and fact-checking.

FIPP Insider Paris was possible thanks to UPM - The Biofore Company.