The first round of recipients of grants to fund community journalism, paid for by Facebook, was announced on 17 July with a second round of grants also announced in the US. While many are happy as grants of up to US$25,000 remain up for grabs, others remain skeptical about the social media giant’s intentions. 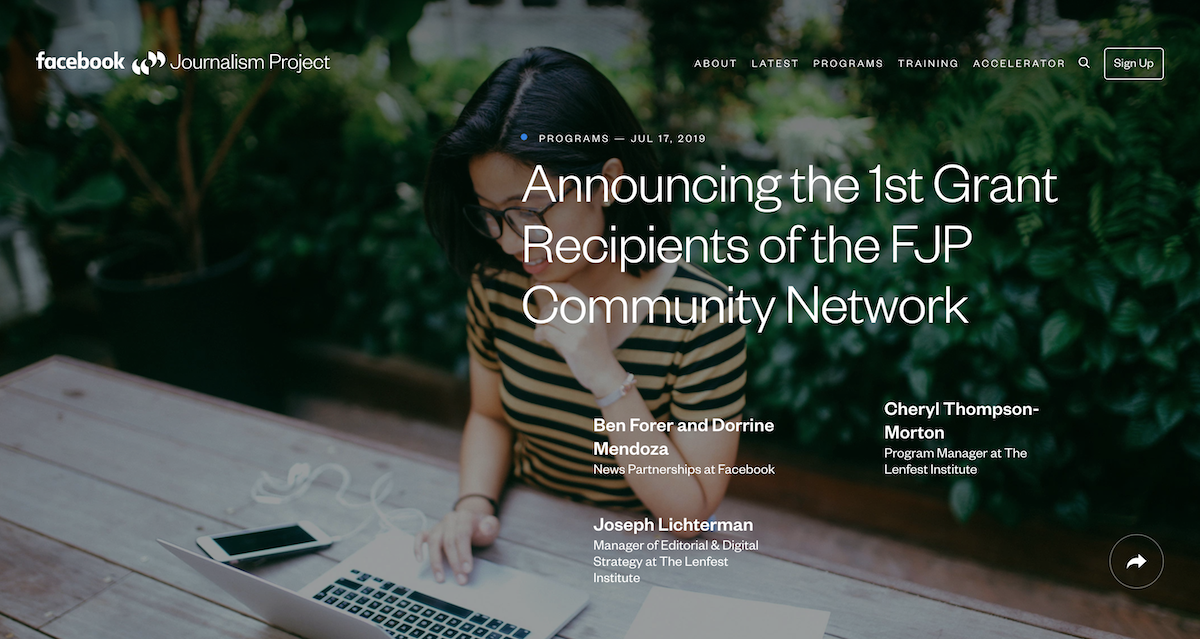 Earlier this year, delegates to the Digital Innovators’ Summit in Berlin heard from Sarah Alvarez, a former New York civil rights lawyer and founder of Outlier Media in Detroit, USA, how her media company studies data to find information gaps within communities to serve inner city Detroit communities through service journalism. In July, Outlier Media became one of 23 grant recipients in the first round of the Facebook Journalism Project (FJP) and The Lenfest Institute for Journalism’s Community Network project. Community Network grants provide up to $25,000 in an effort to support initiatives that connect communities with local newsrooms.

Some other community news initiatives that received the grants are Chalkbeat in New York which creates multi-city ‘listening tours’ combining live events with online surveys to understand gaps in local education information, as well as Omaha Star, Omaha in Nebraska, who collaborate with neighbourhood associations to report on neighbourhood development and gentrification in one of Omaha’s historically underserved communities. See the full list here.

Grant recipients have six months to complete their projects and have agreed to share lessons that will benefit other local newsrooms. “What’s exciting about the Community Network is that we’re able to help local publishers, large and small, test new ideas or take existing projects to the next level,” said Josh Mabry, Local News Partnerships Lead, Facebook. “Because grant winners are sharing the results of their work, they’ll be creating a rich pool of case studies that the entire industry can learn from.”

Not everyone it that excited about the list of recipients. Rob Williams, contributing editor to mediapost.com writes the allocation of funds to at least two of the 23 recipients are questionable. Under the headline ‘Facebook Funds Questionable Local Journalism Projects’ he argues not many people would have thought big-city newspapers like the Los Angeles Times and New York’s Newsday, both owned by wealthy individuals, find themselves in America’s “news deserts” and in need of “a welfare check” from Facebook.

But, says a Facebook spokesperson, “all of the projects that were selected by the committee are helping build community through local news, and all will provide case studies that local publishers, both large and small, can learn from.”

She said Facebook, in partnership with the Lenfest Institute, a non-profit entity set up by former cable magnate Gerry Lenfest, identified projects that will help solve problems in the local news industry; the grants are secondary to the projects and what the ecosystem learns from them. “We selected these first recipients based on purposefully broad and inclusive criteria. Local news will only find sustainability through collaboration, not by excluding creative, community focused, solutions-oriented projects because of who comes up with the idea.

“I should also note that the judging committee is not just made up of Facebook and Lenfest executives, but also in part by journalists and publications who bring a diverse perspective to the process. While some of these are smaller organisations—it doesn’t mean they only select smaller organisations as winners.”

Facebook also says in a news release that the  winners "include a fresh approach to business sustainability through community-funded journalism, and expansion of successful storytelling events shown to increase reader revenue."

A second round of the Community Network grant window closed on Monday 12 August.

These initiatives by Facebook, one of the platforms being blamed for being instrumental in killing off local news operations, come after an announcement in January by Facebook that about a $300 million will be invested in the news industry across news programs, content and partnerships with an emphasis on local news. Read the original announcement here. 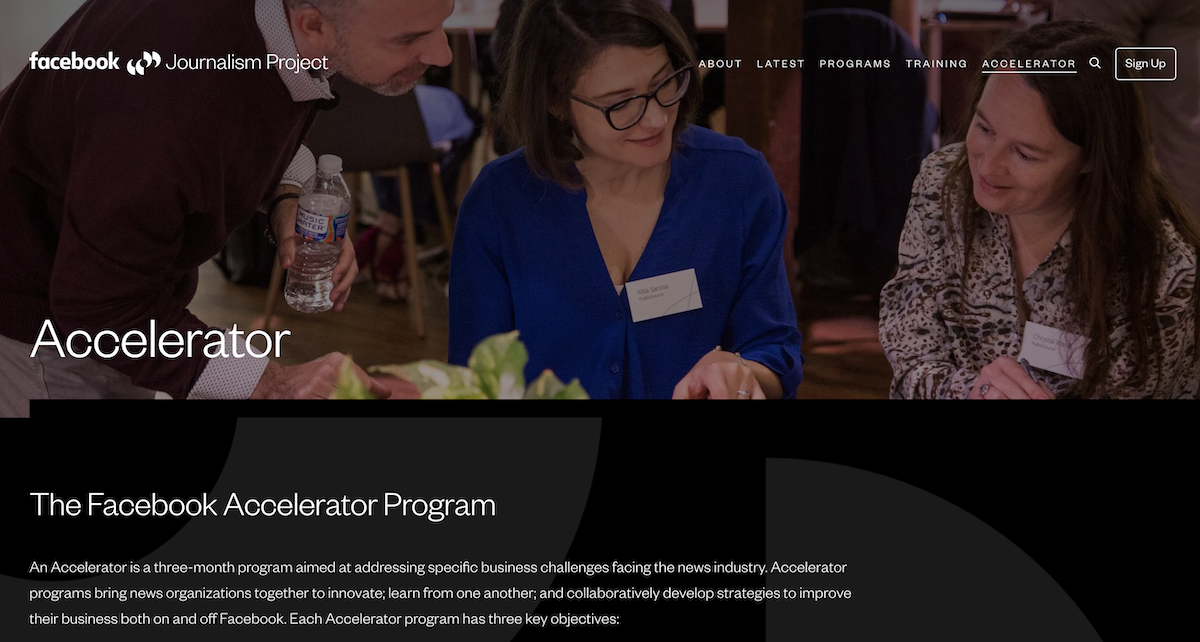 Expansion of the programme?

Facebook says this is only the start. “We are just getting started and look forward to seeing these partnerships roll out and the results that come from them. We'll continue to make decisions around investments in local news based on what has the most impact. As far as the FJP Community Network goes, we opened up our applications for a second round of grants and will announce winners in September. We aim to do one more round later this year following the September announcement and give out approximately $1.5 million in grants by year end.”

At the moment only US based local news initiatives stand in line for grants but this may change. Facebook, responding to questions from FIPP said: “We hope to explore further expansion of the programme once we see the initial results in the US. As we continue to kick off our Facebook Local Accelerators globally and expand a mentor network, ideally this program will grow. Our partners, the Lenfest Institute are US only so if we do expand, we’d have to work with another organisation as our partner.”

In a week where Facebook agreed to pay a record $5 billion to resolve a US investigation into years of privacy violations, many observers remain skeptical about the social media giant’s philanthropic efforts. Chief digital writer of the Columbia Journalism Review, Mathew Ingram, writes the Community Network is expected to get about $1.5 million in total funding this year, according to Facebook, or less than 1 per cent of the amount of revenue the giant social network makes in a single day. Even the broader Facebook Journalism Project, which it has said it is going to fund to the tune of about $300 million over the next several years, is only going to cost the company about two days worth of revenue.

Ingram also questions the motive. He asks: “And what does Facebook get in return?”

According to him, Facebook says it cares about local journalism because local media is all about community, and so is Facebook. “But the main benefit seems to be that the company gets to issue press releases with grateful comments from all of the ventures it is helping support, and that makes it look good at a time when it is under fire from Congress both for its market power and its role in spreading disinformation.”

The real reason why newspapers are losing to Facebook

[Video] ProPublica: leveraging the power of investigative journalism to take the fight to fake news