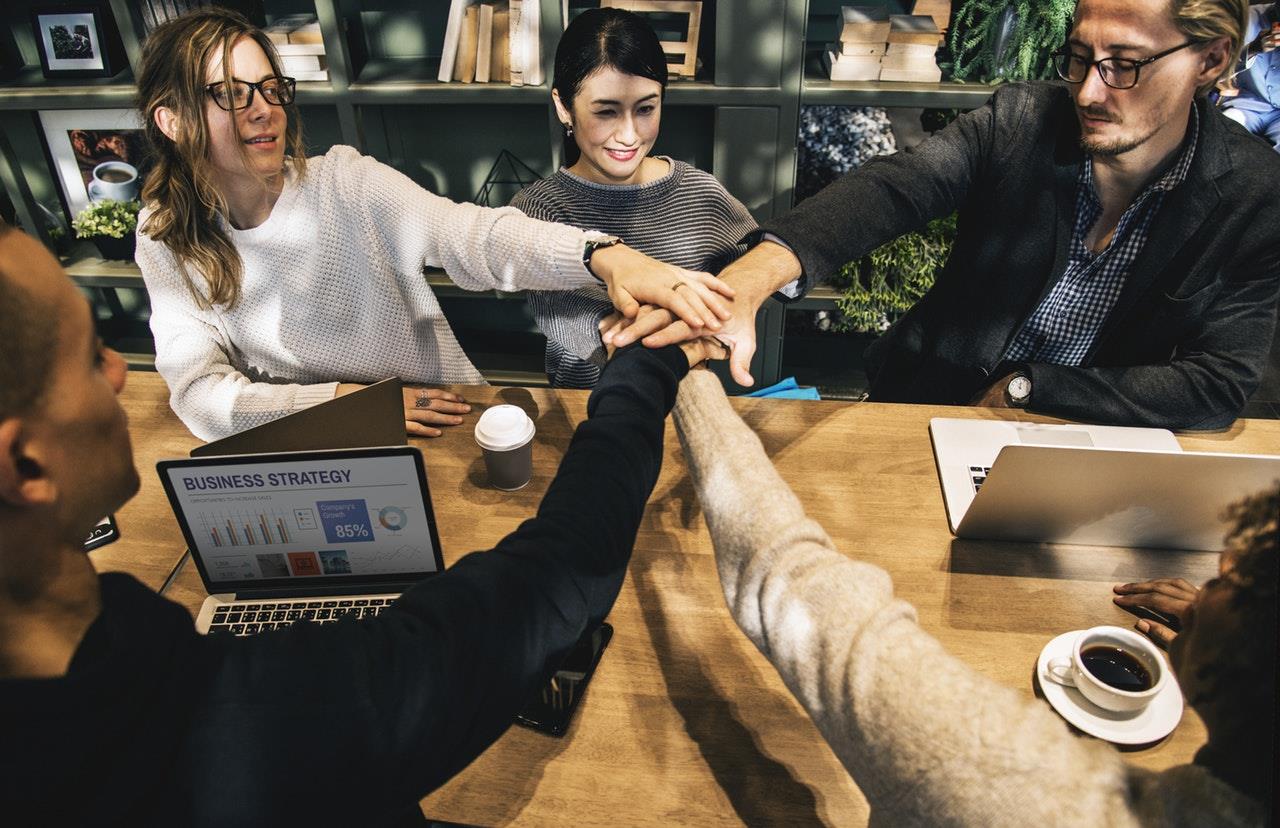 Collaboration has a storied history in the journalism industry, according to the Tow Center for Digital Journalism. “The history of journalism includes many and varied forms of cooperation, as far back as landmark events such as the creation of the Associated Press by five New York newspapers in 1846 to share costs related to the cover-age of the Mexican-American War,” wrote Carlos Martínez de la Serna, in a March report. What makes collaboration different in 2018 is the “the wide diffusion of networked forms of organisation and production, and the transformative impact of these cooperative practices in reshaping the new media world,” he wrote.

There are many purposes for collaboration in the media industry, in newsrooms, across state lines and international borders. Media organisations around the world are collaborating on content, from the BBC’s collaborative journalism efforts that has seen over 90 news organisations in the UK participate in a Local News Partnership (LNP), to news organisations working together in Oregon to cover state government, or uncover tax shortfalls in Kansas schools. Publishers are collaborating with retailers on affiliate marketing and ecommerce, and partnering with fellow publishers on technology and innovative artificial intelligence content.

Indeed, impacts from journalistic collaborations are felt around the world. Collaboration in 2018 is a phenomenon powered by digital networks, that is greater in result than could be produced by individual or company alone. Global collaborations by The International Consortium of Investigative Journalists (ICIJ), involving hundreds of reporters from tens of countries, have resulted in ground-breaking investigations into the Panama Papers, the Paradise Papers, and the Implant Files.

Kalmbach Media, for example, has been focusing on a brand-driven, multi-platform shift this year, which has involved a lot of collaboration internally.

“If you want to create new value in the marketplace, new relationships, you have to change internally,” explained Tim Paulson, general manager for science brands at Kalmbach. “To create that shift in how we do business, we have to shift how we relate to each other functionally, and process-wise.”

Recently, the Wisconsin-based company engaged in broad collaboration between editorial, marketing, sales and finance, in strategy development. “We started a new process where we worked on a new strategy across all groups, through finance, to sales, and we broke out into sub-teams to come up with strategic goals that made sense, and then we ratified those together. So, essentially, a cross-functional, bottom-up, strategic development process,” Nicole McGuire, senior VP of consumer marketing, said.

Collaboration between editorial and marketing departments is key to the growth of Kalmbach brands, McGuire said. “Recognising that the key to growing our brand successfully is marrying both marketing, data, analytics and interpretation of that with our editorial knowledge of our audience in the hobbies and passions that they serve,” she said. “Putting those two together is far more powerful than separate, so much so, that we physically moved office spaces in a recent remodel of the building, to put marketing and editorial together, to inspire that collaboration and break down any silos.”

Historically, the editorial and the marketing teams were on two different floors. “And, it’s amazing how separate floors can have those barriers,” McGuire explained. “We recognised that and now marketing moved upstairs, to be embedded with editorial teams and we’re seeing the results of that collaboration and shared thinking in new audience development for a digital perspective, product development and new ways to market our brands. We’ve released nearly 1,000 new products under the last two to three years, like our globes and meteorite kits, flashcards, 3D-printed models… and we’ve seen the results are in the sales. We’ve grown ecommerce sales nearly 70 per cent in the last three to four years.”

At Harvard Business Review, a great example of internal cross-team collaboration is the Big Idea series, which is published between print issues. Over the last two years, HBR has published 13 of their Big Idea series and not only has learned about collaborating across teams, but has seen an impact beyond the publishing event, according to Scott Berinato, senior editor at Harvard Business Review.

“We feel very good about how we’re approaching it, the idea of five or six articles over five or six days, and we’ve proven the hypothesis that this is a powerful way to engage the audience between issues,” Berinato said. “From an impact point of view, we’ve seen plenty of pickup on these where it is making a difference, like government com-mittees reviewing the content, or people sharing it in classrooms, using it for classroom material.”

A lot of Berinato’s time is spent figuring out how to produce these issues more efficiently and collaborate across editorial, marketing, production and design. Collaboration can be challenging, he said.

“The main challenge is to garner resources where they’re limited,” Berinato said. “We have to lean on people who have a lot of other things to do too. This is part of their job, but it’s not always the first part of their job, it’s something extra they have to do.”

Drawing on different perspectives helps in the collaborative process, he said. “I have enjoyed working with all of the different groups,” Berinato said. “I think it’s healthy, it also exposes you to the difficulties of working across different groups. You start to see very quickly, how different groups operate differently and use different language, and you have to work through that and think about that.”

For publishers looking to use the wisdom of their staff, to collaborate internally, they must show people they need resources from, the value of working with you, according to Berinato.

“You have to demonstrate why you’re excited that they’re part of the team and what they’re going to get out of it,” he said. “When I started, in our meetings, I emphasised we were lucky to do this, we were inventing something that had never been done before, and tried to get the team excited about it, to realise that this is more than a chore or a task they have to do.

“What I’ve learned is that people are motivated by being excited about what they’re doing, not just getting the work done. I have to show them I’m having fun, that what we’re doing is valuable, in order for them to also have fun. It’s not thinking about projecting what you are, it’s thinking about projecting what other people need,” Berinato said.

How to break silos

Collaboration is happening to all kinds of degrees, across industries, according to Heidi Gardner, PhD and Distinguished Fellow in the Center on the Legal Profession at Harvard Law School. Gardner’s 2017 book, Smart Collaboration: How Professionals and Their Firms Succeed by Breaking Down Silos focuses on professional services firms and how to break down silos in big organisations – but the principles can apply across industries.

Smart collaboration is necessary because there are two competing trends, Gardner explained. On the one hand, professionals and knowledge workers are increasingly specialised, and on the other hand, problems, topics, and issues are increasingly complex, uncertain and multi-disciplinary. “Any given individual, no matter how smart and hard-working they are, needs to team up with others who have complimentary expertise in order to be able to deliver the most robust, holistic set of solutions or perspectives on an issue,” she said.

Though, there are challenges and barriers to getting people to operate in this way. A common challenge found across professional service firms was convincing highly-specialised individuals to work with their colleagues, as ego can get in the way. “People are either unwilling to admit that they can’t do it all themselves, or depending on how credit gets allocated and those sorts of things, they might be protective of their turf,” Gardner explained.

Collaboration can be a scary process. For people who aren’t used to operating like that, there is a lot of perceived risk, whether it is giving up control, learning a new jargon, or making themselves vulnerable, Gardner said.

“There are a lot of risks, that are perceived up front, and some investment of time and energy in terms of learning how to do this properly, whether it’s using the new technology, to communicate with people who aren’t colocated, all of those sorts of things, getting the routines put in place is often quite time consuming,” she said, “So, we see the investment happing up front, and the problem is that a lot of the payout doesn’t happen instantly. There can be a time gap where you’ve been investing, but it still isn’t paying out, and that’s the really risky time then because a lot of people, frankly, just give up.”

In her book, Gardner writes that collaboration is a significant driver of financial and people-related benefits. “There are lots of ways you could think about what kinds of benefits will arise, when you start getting people teaming up, to address these issues from a multi-disciplinary perspective,” Gardner explained. “I think the opportunities there are multiplied when you start thinking about collaboration across organisations or across different kinds of experts outside the company.”

How Kalmbach Media is tackling reinvention