At DIS 2019 the organisations’ managing editor Robin Fields will be explaining how ProPublica approaches journalism in an age of disinformation, fake news and outright lies. Here she explains her day to day role and how the organisation works both internally and with its partners.

Tell us a bit about yourself. What is the story of your career to date, and how did you land at ProPublica?

I joined ProPublica as a reporter in 2008, doing projects on bad dialysis care and a chain of psychiatric hospitals. I moved into editing in 2010 and became the managing editor in 2013. Before coming to ProPublica, I was a reporter for nine years at the Los Angeles Times, where I covered consumer affairs, technology and demographics before moving on to do investigative projects. I started my career at the South Florida Sun-Sentinel in Fort Lauderdale.

And what are your key tasks as managing editor?

I run the day-to-day operations of the newsroom, helping to choose which stories and subjects we cover and supervising projects from conception to publication. I also play a central role in editorial hiring and in choosing new editorial initiatives.

For audiences outside the US, what is it that makes ProPublica so unique?

From my standpoint, there are a couple of things that are distinctive about ProPublica. First and foremost, we measure our success principally by whether we’ve had an impact – whether our stories make a difference. We strive to produce stories that other news organisations aren’t, rather than being 10 minutes in front on the scoop of the day. It’s also central to our approach to be collaborative, partnering with other newsrooms to do journalism neither we, nor they, could do alone and sharing our stories and data for free. 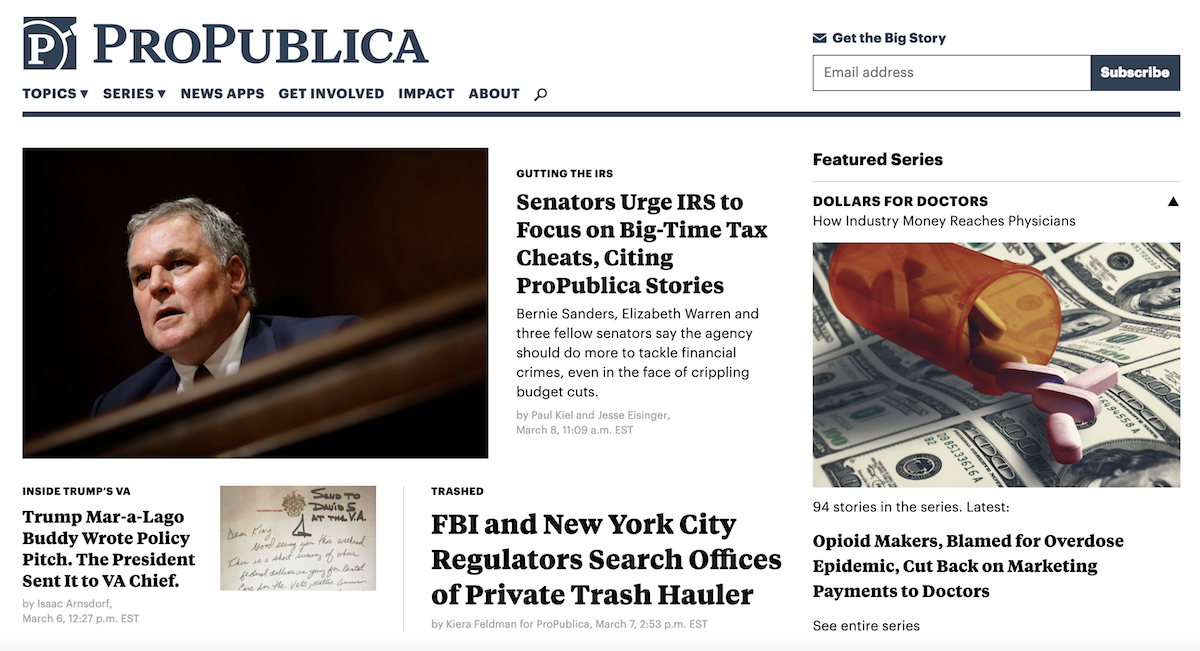 Talk us through your editorial process. How is it that you decide to publish certain stories?

The vast majority of our stories and projects are pitched by reporters, since by the time an editor realises something’s a story, it’s usually been published… by someone else. As editors, we evaluate, help refine and focus the stories pitched by reporters, checking in regularly as they develop. There is no more valuable asset at ProPublica than the time of our journalists, so picking the best, freshest and most urgent stories is among our most important jobs as editors.

Early on, we may bring in members of our data, interactives, engagement, video and design teams, all of which may play an integral role in a story’s realisation. Once there’s a draft, a story will typically be assessed and edited by a line editor, our lawyer and by me and (sometimes) our editor in chief. If we are publishing with a partner, it may be edited by the partner’s editor as well.

You also seem to have become a key watchdog on the big tech companies. How does this affect your relationships with them?

We fully expect to have an adversarial relationship with all manner of powerful people and institutions, whether they’re businesses, like the tech giants, arms of government or individuals. This is pretty inevitable given our mission, though we work hard to come into every story with an open mind and to include the points of view of our subjects.

You have been experimenting with technology recently, such as the Facebook chatbot. How and why was this developed? Are there any other technological innovations on the horizon?

I can’t really say much about anything we might be building, but innovation and invention is central to our approach to journalism.

Your data store offering is an interesting innovation. Are there plans to further develop it further?

Yes! We are adding ecommerce, allowing users to buy data from the store without having to talk to anyone. It’ll be live shortly.

And do you see video as core to your work in the future?

Yes – we created a video unit about a year and a half ago and are now expanding it.

How do you feel more generally about the overall state of investigative journalism in mainstream news organisations?

First, I should say I’m only qualified to comment on the state of investigative journalism in US mainstream news organisations – you’ll have to tell me about the rest of the world!

In the US mainstream news organisations’ commitment to investigations seems quite strong right now and has certainly been invigorated by the current presidential administration. The list of news organisations that have undergone substantial growth in the last couple of years includes not only ProPublica, but also the New York Times, the Washington Post and CNN, all of which have invested substantially in investigative reporting. At the same time, local news organisations and, more recently, digital outlets like BuzzFeed and Huffington Post have gone through layoffs. As newsrooms shrink, their ability to devote time and resources to difficult, in-depth stories can shrink as well.