Both deal volume and value showed solid gains over 2014 results, increasing 8 per cent in number of deals and 15 per cent in value year-over-year. With the surge in M&A continuing, deal activity approached levels not seen since the pre-recession period in 2007, according to JEGI, the leading independent investment bank serving these core markets. 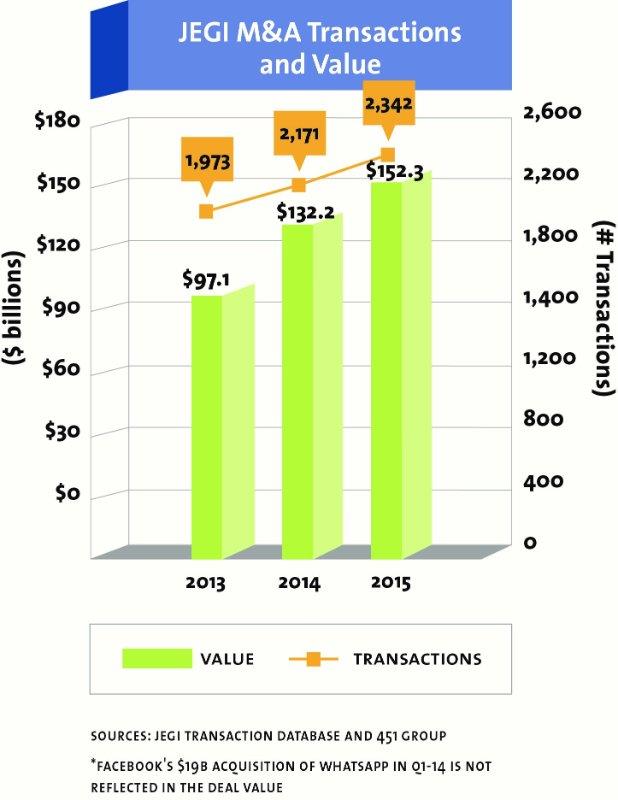 The most active sector for M&A was Software & Tech-Enabled Services, which accounted for more than half the deal volume and value, with 1,441 transactions totalling $76.3 billion.

Corporations are investing heavily to grow their software and technology capabilities through M&A, given the fast-paced evolution in cloud-based technologies and the increasing convergence across media, marketing, data and technology. In addition, private equity investment continues to expand in software and technology, in line with PE firms’ healthy appetite for businesses with recurring revenue models.

The chart on the left in the attached PDF shows a breakdown of deal volume by sub-sector within this red-hot sector. Application software was the most active sub-sector, accounting for nearly one-third of the Software & Tech-Enabled Services sector deals. Other active sub-sectors were IT services & distribution (18 per cent of the deals), mobility (12 per cent), IT outsourcing (10 per cent), hosted services (7 per cent), and information management (7 per cent).

The chart on the right in the attached PDF shows a further breakdown of the segments within the application software sub-sector. Vertical applications accounted for the highest deal volume (31 per cent), followed by customer relationship management (16 per cent), enterprise resource planning (16 per cent), and business intelligence (12 per cent).

JEGI was very active in 2015, with 20 announced deal closings, as well as a number of pending transactions. In the fourth quarter of 2015, JEGI announced five deal closings:

As we look to the year ahead, we are facing global uncertainty, with volatility in stock markets worldwide, due to interest rate increases, the economic state of China, and an upcoming US presidential election, as well as lingering fear following terrorist attacks in Paris and San Bernardino, California and insecurity throughout Europe from the ongoing refugee crisis.

However, the US M&A market has continued to flourish, proving to be an economic bright spot in an uncertain global economy. Despite the widespread uncertainty, the US continues to see a stable domestic economy, driven by low unemployment, robust debt markets, and strong corporate investment. Global corporations and private equity firms are continuing to invest in M&A, given unprecedented capital reserves and the need for growth. While we are still wary of the global economy’s potential impact on deal-making, we expect M&A to remain very active through 2016.

The b2b media and technology sector deal volume was down from 103 transactions in 2014 to 93.  Deal value, however, rose slightly to $6.2 billion, up from 2014’s $6.1 billion.  Notable Q4 2015 transactions included the: SFW Capital Partners $212 million growth investment in Gerson Lehrman Group, an online platform for professional learning and expertise; All Web Leads acquisition of Insurancequotes.com and NetQuote from Bankrate, online marketplaces for purchasing insurance products and services, for $165 million; and GateHouse Media acquisition of Dolan Company’s Business Information Division, which publishes business and court journals, as well as commercial newspapers, for a reported $46.5 million.

The consumer media and technology sector’s deal volume dropped slightly to 201 transactions in 2015, down from 206 deals in 2014.  Deal value rose substantially, however, up 60 per cent to $26.9 billion, due to several transactions crossing the $1 billion threshold in 2015, including Alibaba’s $4.4 billion acquisition of an 80 per cent stake in Youku Tudou, a Chinese Internet television company, and Expedia’s $4.3 billion acquisition of vacation rental property marketplace HomeAway, both in Q4. Other notable deals from the fourth quarter of this year were Pandora Media’s $480 million acquisition of Ticketfly, a cloud-based integrated social marketing and ticketing platform for events and venues, and Gannett’s acquisition of Journal Media Group, which operates as a media company with print and digital publishing activities, for approximately $300 million.

M&A activity for the mobile media and technology sector rose in both number of deals announced and value in 2015, to 148 transactions and $6.5 billion vs. 2014’s 141 deals and $5 billion. The rise in deal value was mainly due to the Audi, BMW and Daimler acquisition of Nokia’s HERE for $3.1 billion in Q3. Notable Q4 2015 deals included: RNTS Media’s acquisition of Heyzap, provider of mobile advertising for app developers, for $45 million; LOV USA’s acquisition of Smooch Labs, creator of Jewish dating app JSwipe, for $17 million; and Microsoft’s acquisition of Mobile Data Labs, provider of mileage-tracking app MileIQ, for an undisclosed amount.

Digital media mergers & acquisitions predicted to pick up in 2015