This article is written by Hafizah Hazahal, analyst at SPH Magazines, and was published previously at sphmagazines.com. You can see the original post here.

While consumers of the past are able to patiently wait for magazines’ coverage of collections months after runway shows, consumers of today expect to view, and increasingly, purchase them immediately. Fashion brands wanting to capture demand quickly are responding with shorter fashion cycles and almost-instant delivery times.

Where does this leave the magazine, which used to be the holy grail for fashion brands? Can it still fulfil its role as fashion’s key marketing channel in 2017 and beyond?

Against the backdrop of a volatile global economy, McKinsey reported that 2017 will be the year of organic growth for fashion brands. The traditional means of growth by volume through geographic or store network expansion has been exhausted.

Instead, brands have to focus their growth efforts through strengthening their value with consumers by engaging more deeply with them. This is where magazines can play a key role.

Research studies on magazine readers in Indonesia, The Netherlands, the UK (reported in FIPP’s Proof of Performance Report 2014) and pretty much everywhere else in the world found that magazine reading is an intimate, me-time in which people relax and unwind by indulging in content that is high in personal relevance and interest.

As a result, UK readers spend an average of 50 minutes per issue – a feat in today’s fragmented media landscape with goldfish-standard attention spans.

In our own [SPH Magazines’] study (done in collaboration with GfK Singapore) across more than 3,500 readers of 10 key women’s lifestyle magazines in Singapore, we found that an average reader spends 49 minutes reading magazine, with almost 50 per cent of respondents reading more than half of the magazine.

On top of being highly engaged, magazine audience is also generally more affluent than other media consumers. In GfK MRI’s Survey of the American Consumer in Fall 2015, it was found that amongst top consumers of each media, households with income more than US$150,000 are drawn most to print magazines. Similarly, as found in Nielsen Media Index 2016, median personal and household incomes are the highest amongst magazine readers in Singapore.

At SPH Magazines, brands are offered audience networks spanning across platforms and titles, allowing them the depth of reach – with targeted, quality audience synonymous with magazine media – and breadth in the sheer scale of reach.

For example, our Women’s Network is an amalgamation of 14 leading women’s lifestyle titles in Singapore, offering a reach of 2.4 million avid shoppers, fashion and beauty trend followers, brides-to-be, multi-tasking mothers, and working professionals.

ION Orchard, a leading shopping mall in Singapore, leveraged on our Women’s Network to showcase ION’s Autumn/Winter campaign and drive foot traffic to its tenants.

After identifying its target consumer segments, various creative formats were executed across the network’s print and digital assets. These include fashion spreads, a dedicated microsite, and social media posts. In-store events were also organised for tenants such as Dior and Chanel.

This integrated media exposure resulted in 30 per cent incremental audience reach and 50 per cent incremental foot traffic to ION. In this context, magazine media is able to fulfill both aspirational desires of readers and advertisers’ need for reach, to meet practical KPIs such as increasing footfall.

In a clear break from the traditional fashion ecosystem, some brands are enabling consumers to purchase pieces right after runway shows instead of waiting for months for it to be available on retail.

For example, Burberry enabled purchase immediately after its September 2016 show from the company’s flagship stores, on its website and at selected wholesale partners. This is very much welcomed by consumers as evident from the instant uplift in sales with the boutique selling out pieces by noon the next day, and its website selling out pieces within the week. In another example, several pieces were sold out online right after the TommyxGigi runway show.

Aligning with this “see-now, buy-now” initiative by brands, magazines are leveraging on new technologies to meet consumers’ demand on instant gratification. SPH Magazines’ digital editions are now enhanced with “buy” buttons that link consumers to the site where they can purchase what they saw on the magazine.

In print, augmented reality is being used to transport consumers from the print page to the website through their smartphones. This enriches the brand experience for the magazine reader, bringing them through from awareness to purchase.

Enhancing magazines with ecommerce capability is greatly advantageous for brands as magazines have been proven to be able to drive “action” amongst its readers.

Our Advertising ROI study found that on average, a magazine ad is remembered by 58 per cent of respondents, and out of them, 72 per cent take specific “actions” after seeing the ad. These actions range from looking up more information about the brand, recommending the product/service to others, to actually purchasing them.

This is driven by the unique characteristic of magazine readers who not only engage with, but also trust and value the medium’s ads, on top of content. 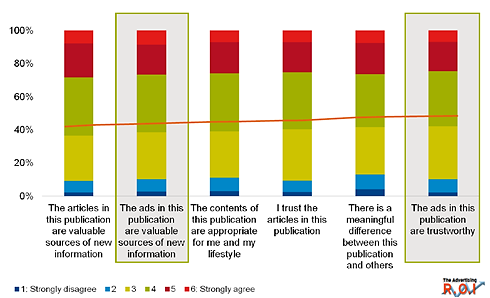 2017 and beyond: Is there still a role for magazines?

The answer is a definite yes.

Firstly, magazine readers rank highest in terms of affluence and are highly engaged with the medium. Through SPH Magazines’ audience networks, brands have the opportunity to reach large groups of this premium and targeted audience through a single buy.

Secondly, with ecommerce capabilities, it is well-poised to allow brands to reap the rewards of a ready-to-act audience by enabling instant gratification for this see-now buy-now generation.

As long as magazine media keeps evolving to align with consumers’ lifestyle and expectations, there is no doubt it will continue to be a critical marketing partner for fashion brands.

This article was previously published at sphmagazines.com. You can see the original post here.

SPH Magazines is a member of FIPP.