Sharan Dhaliwal, editor-in-chief of Burnt Roti, a South Asian lifestyle magazine, started her title in March 2016, followed by an online presence a month later, as a space for South Asians to have conversations where they couldn’t elsewhere. Dhaliwal explained that she started the magazine because she wanted to have conversations about identity, race, colourism, sexuality, mental health and women’s rights, among other things.

“The biggest problem I’ve had is funding,” she said. Dhaliwal explained that her magazine was self-funded at first, and she couldn’t find sponsorship because her title was so niche.

Burnt Roti, which is published annually in print and regularly online, is funded primarily by sponsorship for specific projects, Dhaliwal explained, but as a whole is looking for additional funding. “Advertising is something we can definitely look into but the effort put in doesn’t equal the small amount of advertising rewards we will receive, as Burnt Roti is a one-person band,” she said.

However, Burnt Roti’s last issue was sponsored by an Indian brand, Natco, which Dhaliwal says has a great initiative to put their profits in businesses and charities that help the disadvantaged.

And Dhaliwal found a solid revenue stream in events, like Bollywood pub quizzes, mental health and sexual health workshops, exhibitions, as well as parties with DJs, she said. “One of the things we do is get the community together, where they’re talking face to face, in events,” Dhaliwal said. “Even though the print is important, I realised that events are where it’s at. I can get those niche venues that want to work with us.”

Burnt Roti has a one-day festival coming up later this year which will hold screenings, workshops and talks, looking to concentrate on the LGBTQ+ community and themes on anti-blackness, Dhaliwal said.

In the past, the magazine has also teamed up with large institutes including the Tate & V&A, on their themed nights to give creatives a platform to wither perform or contribute somehow, Dhaliwal said. “One previous event was with the V&A, which was on the theme of ‘Threads’, so we held workshops, had spoken word poets perform and screened a video from the BBC about British South Asian digital identities.”

In Canada, publisher Melony Ward explained that her title, Canada’s History, was facing a revenue problem. The title has a total brand audience of 1.4 million, 38 per cent of which are millennials, and 56 per cent are households with children, and a children’s title, Kayak. Canada’s History partners with schools, schoolboards, and museums across the country.

“Our subscription numbers are incredibly stable – nominal increases, nominal decreases, or flat, depending on the year. However, even small decreases compound, which after six or seven years, can add up,” she explained. “We have had success making up the revenue with custom publishing and content, education partnerships, and philanthropic investment.”

The title has seen success in areas that stay true to their mandate, Ward said. They’ve seen an increase to their bottom line through partnerships with like-minded philanthropic organizations, heritage-oriented companies, museums, travel operators, and NGOs, especially in providing educational content, exhibitions, and leadership. 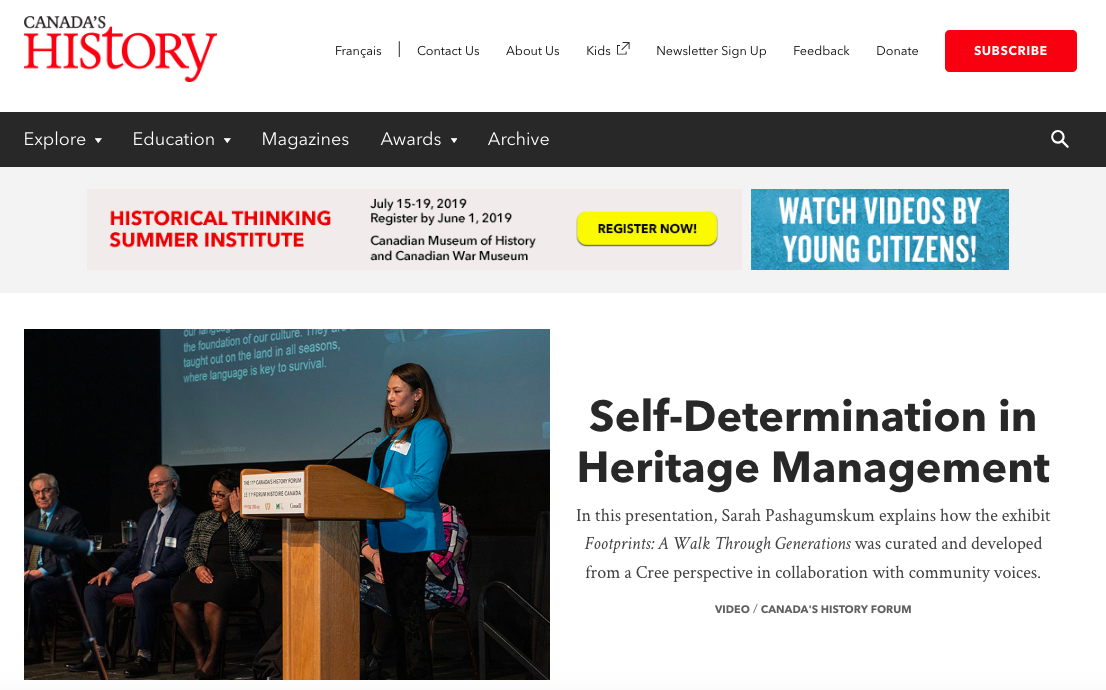 Canada’s History was started by the country’s oldest company, The Hudson Bay Company, which was granted a charter from King Charles II in 1670, the publisher said. The title, formerly called The Beaver, is coming up to its 100th anniversary in 2020, so timing was perfect in making their 100 years of publishing accessible digitally. The archive was supported by The Hudson Bay Company History Foundation.

“We are also making headway in philanthropic gifts from our subscribers. I’m trying to make sure that we focus our efforts – do less and get more out of what we do do,” Ward said. “We have three audience segments that we try to work and those are the ones we have time for.”

A special digital-only classroom edition of Kayak: Canada’s History Magazine for Kids called “Black History in Canada” was supported through philanthropic investment, Ward said. “We made the issue available for free to teachers, along with classroom resources and activities created by our Governor General’s History Award teacher recipients.”

For niche and special interest publishers around the world facing similar revenue issues, Ward suggested, “For niche titles, I believe the best route is to stay absolutely true to your mandate and your reader interests. Your readers are passionate about your content – provide them with an opportunity to make larger investment in its creation. Invite them to be more involved through opportunities to meet leaders and fans in your community.”