Ikea is encouraging women to urinate on their advertising. Well, to be more specific, on their baby crib advert in Swedish lifestyle magazine, ‘Amelia’. Should any of these women be pregnant, a strip on the advert will turn yellow and reveal a discount price for the crib. “Try to imagine people doing this with their smartphones!” laughs Christian Kallenberg, a magazine consultant with We Like Mags in Germany.

Kallenberg is a firm believer that paper and print should continue to be play a key role in publishers’ multi platform strategy. As the person who recently revived one of Germany’s leading 1980s magazines – YPS, with cover-mounted gifts – he says publishers and advertisers seem to forget that paper can address far more senses than most digital products.

“By making hundreds of thousands of PR contacts, just with a wee, is genius. Almost every major news site in the German speaking area ran that story. And it’s great proof of the things only print can deliver.”

Recently there has been an upsurge in innovation with print and it’s not only publishers who are taking advantage, brands have been keen to experiment with new ways to sell their products in print magazines and newspapers.

The Innovation in Magazine Media 2018-2019 World Report, which will be published on 19 March, highlights several of these. Like an Asics running shoe advert on the cover of the April 2017 editions of the ‘Runners’ and ‘Women’s Health’ magazines in Brazil, which used thermochromic ink that reacts to body heat. When a runner stood on the ad with his or her naked feet, the ad would show whether their foot type was a supinator (when the shoes wear themselves out on the outer area of the sole), pronator (wear out on the inner area of the sole) or neutral (when the sole wears out uniformly). The ad, which won the 2017 Cannes Bronze Lion award, was created by Asics with the Neogama/ BBH agency in Sao Paulo. 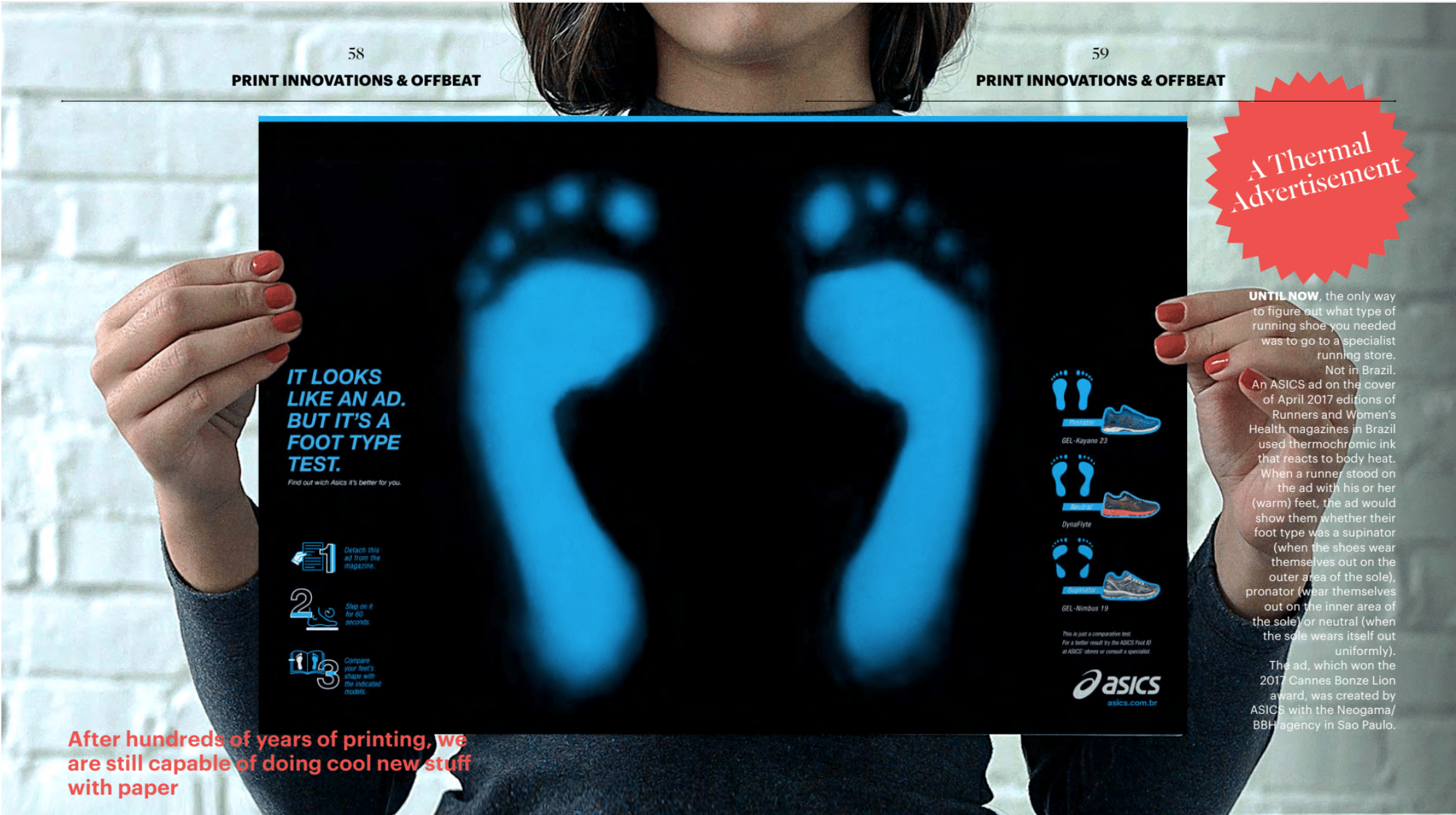 The Innovation in Magazine Media World Report also features a Toyota ad in ‘InStyle’ magazine fitted with a LCD heart monitor simulator. The fold-out ad opens to replicate opening the car door to reveal the new 2018 Camry dashboard. In addition to being able the smell a ‘new car’ scent, readers who place their thumbs on the steering wheel’s built-in sensors can see their heartbeat light up on the dashboard and also hear their heartbeat through an audible beeping sound.

Other innovations featured in the report include paper adverts for family movie collections that smell like buttered popcorn, touchpads for a shaving ad, which demonstrated how dad’s beard feels against the soft skin of a newborn with different roughness levels of shaving. 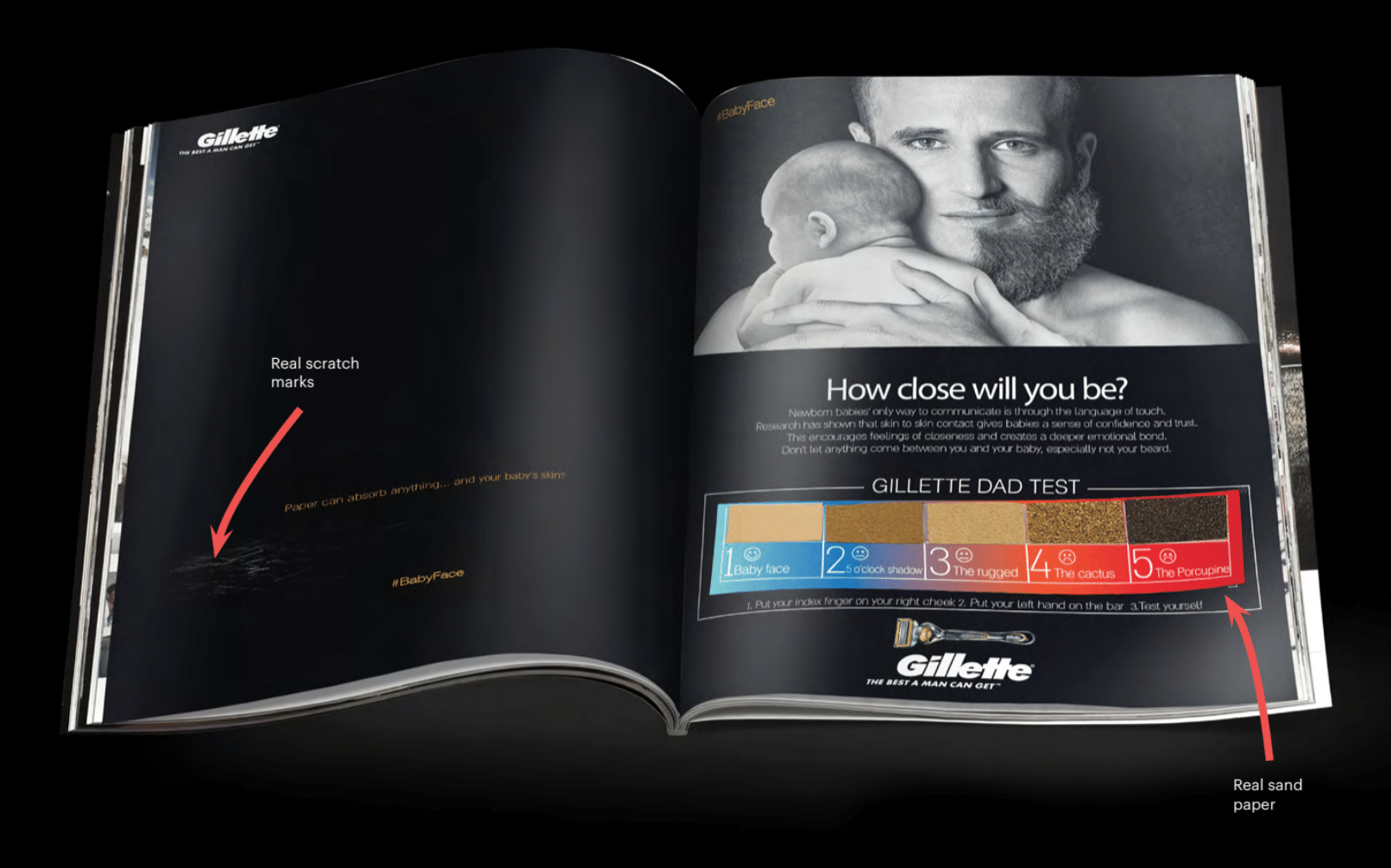 No matter how innovative, most of these examples remains traditional advertising in the sense that the next step in the purchasing funnel remains solely with the reader. But now, more than ever before, print advertising and content marketing, is being integrated with digital technology to automate the transactional process.

This month Hearst unveiled a new, interactive way for Seventeen and Cosmopolitan in the US to shop from the pages of their favourite magazines with Amazon’s SmileCodes. Debuting in the March issues of each US magazine, readers are able to use an Amazon smartphone app to scan SmileCodes next to products and – with one click, in PR speak – they’re able to purchase it directly from Amazon.

Cosmopolitan and Seventeen’s publisher and SVP Donna Kalajian Lagani told FIPP the partnership with Amazon uses the classic magazine experience to encourage readers further down the purchasing funnel. Marketers still have all of the benefits and awareness to make impressions, tell brand stories and use beautiful imagery that’s so unique to print but can now also ensure that the purchasing process is effortless.

Advertisers partnering with Seventeen and Cosmopolitan now feature shoppable native content along with brand advertising in the magazines as well as shoppable articles and stories on both magazines’ digital and social channels. “The vision was to take our media platforms and make them shoppable in a way that consumers want them,” Lagani said. “The really cool thing is that no one has ever done this – you’ve never been able to shop directly from the pages of a magazine with one click to go directly to Amazon and buy.”

While print has been flirting with augmented reality (AR) for some time now, the question is whether advertisers can be convinced to utilise it at scale. In February, the New York Times published its first feature story with AR, depicting 360 degree models of Olympians suspended in action. There’s no AR headset needed, only a smartphone app to view the spectacle. Time magazine has been creating similar content for a couple of issues now with their app having the capability of turning an image into a video story when the camera app is focussed on specific images.

But none of these big names in legacy publishing have taken AR to advertisers – yet. A small town publisher in the Gold Country town of Jackson in Northern California, who produces the twice-weekly Ledger Dispatch, has however. The publisher, who has been experimenting with AR technology for some time linking anything from a town fire or new dance moves to AR videos and digital content, now features an advertisement for the Jeff Holman Auto Center in Jackson. The dealer’s recent print ad linked to a video promoting the benefits of shopping for a used car at Holman Auto, with future ads being planned to link print ads of specific vehicles to videos of “a tour of the car”.

Will this take off? Sometimes it takes the small town players to show the big ones what can be done.

The Mr. Magazine™ interview: How GQ takes print seriously and has the robust content on all platforms to prove it