The company works to identify, report, and deliver valuable information to empower residents to hold landlords, municipal government and elected officials accountable for long standing problems in the housing and utilities markets. Part of the brief is to share that information with the city’s key news sources, thereby aiding journalists with their stories.

Here Sarah, who will also be presenting at DIS2019, talks about how she was inspired to start Outlier, how it works, and the potential of service journalism across the world.

Tell us a little about your career to date?

My first career was in law and civil rights. I spent about six years in that work, mostly unhappily, until I was able to switch careers and started in journalism. I started out at Michigan Radio, a statewide NPR affiliate, in 2010. My beat was low-income families, and I tried developing content that would be useful to this audience, rather than producing stories about struggling families that were intended for a higher income audience. In 2015 I went to Stanford University for a year-long JSK Fellowship. My goal was to design a high quality news service for low-income news consumers and I started Outlier Media in 2016.

What was the catalyst that led to the creation of Outlier Media?

I was lucky to be introduced to Jay Hamilton’s work on how the economics of the news industry create information gaps, and that was the structural analysis that inspired and challenged me to think about more structural solutions to my own dissatisfaction. Of course, we can each only do so much so I went to Stanford for a year determined to come up with a methodology that would be solid enough to serve Detroit and could be adapted by journalists in other towns and cities.

How exactly does Outlier Media work?

We start with defining our beats based on the information gaps in the city. We used United Way 211 data, basically a call in line for people who need to be directed to resources or are having a problem meeting a basic need. That identifies a resource gap, and we’ve found those are a pretty good proxy for accountability gaps. Lately we’ve also started supplementing this data with some information needs studies we designed.

In Detroit the primary information and accountability gaps are housing and utilities. We started reporting to figure out what high value and actionable information we could give to our news consumers, and that was mostly in housing. We put together a big database of every address in the city with potential liabilities associated with that address like the tax debt, the number of tickets the owner has gotten for not keeping up the property, inspection status, owner name. This way a potential renter or buyer can check this and have more information and therefore more power in any transaction. This is incredibly valuable in Detroit where more than half of residents are renters, the vast majority of people are low-income and it is still almost impossible to get a mortgage, so 85 percent of people who buy homes have to buy them in cash and there is no bank mitigating the risk of the buyer.

We offer the info we have up front, over text message. We broadcast out to lists and people also text us. We ask everyone if they want a reporter to follow up with them and then we do. We meet that news consumer’s info need one on one and those questions and issues inform what kind of accountability and investigative pieces we do. We’re in touch, one on one, with more than 200 people a week.

And how do you work with the media? Please give some examples.

We don’t have our own publishing platform outside of our SMS messages, so when we have an investigation we’re working on we work with a local outlet like the Detroit News, or Bridge Magazine or WDET, our public radio station. I firmly believe that collaboration is essential to surviving in this media environment, and I value these outlets and don’t see them as competitors. We have a robust partnership with WDET, our public radio station, in that we run a couple of programs together to support emerging local journalists. We also have a partnership with a newsletter called Detroit Detour where we get 20% of all their membership dollars in exchange for our reporting and doing watchdog training for their members. 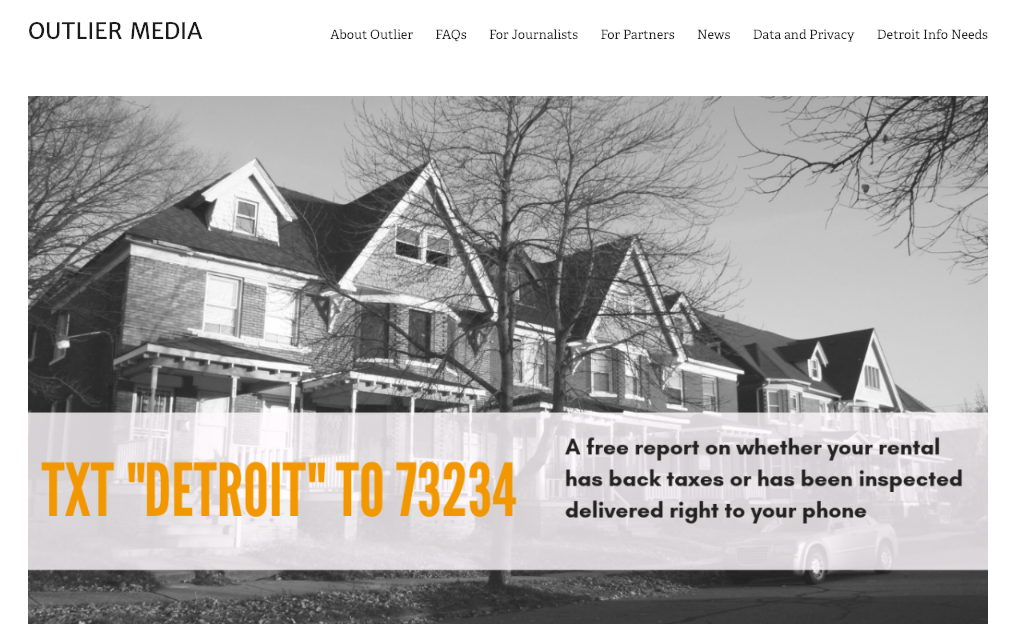 You talk about ‘service journalism’ – how do you define the term? Can you give examples of other companies operating in a similar way?

I think of service journalism pretty simply in that I think it’s my job to use the skills and the time I have to serve my fellow Detroiters. That means I need to be very comfortable being directed by them – what are the answers they want and need? I want to redistribute the watchdog function of journalism because that is far more efficient. In order to do that redistribution we have to give our news consumers carefully reported, valuable and actionable information.

I want to give my news consumers more value than I get from them, which is a high bar and hard to do. We have to be honest about the value we take from our news consumers. Are any of my news consumers getting to travel internationally because of me? No. I couldn’t do this work without their trust, and we need to work really hard every day to justify our existence. There are a bunch of folks who operate this way I think; City Bureau in Chicago, Spaceship Media, Hearken, and I think DeCorespondent is built on a similar model. There are also countless individual reporters who work this way even when they work within newsrooms that aren’t ready to fully commit to these values.

What’s the potential of the concept? Would you like to expand to other cities?

We, meaning folks that work in the media, are the limiting factor on this concept. Most of us aren’t willing to push ourselves to serve an audience we aren’t already reaching because it’s not a sure thing. It seems safer and is certainly more comfortable to double down on the audience we already have but that’s no way to keep an industry from dying.

The concept of Outlier is simple, it’s responsive accountability journalism meant to fill information and accountability gaps. We’ll continue to adapt to the information needs of Detroiters and I’m sure we’ll never run out of work. This is a model that could work in a lot of other places and we’re happy to consult with news organisations looking to serve a larger slice of their communities. At the same time we’re lucky to already serve the best community in the world and have no plans to expand beyond Detroit.