Recently, a team of investigative reporters at ProPublica created a working river flume model to drive home how river levees increase flooding. It was part of a larger multimedia and interactive package that investigated river levees in the US mid-west, which included a separate companion story “Flood thy neighbour”, and a podcast. The interactive page itself, called “To see how levees increase flooding, we built our own,” has elements of video, text, graphics, an interactive, charts and a mapped case study.

And, readers can play with it, increasing water flow in a room-sized river model until it floods.

The project was a ProPublica-Reveal investigation, with funding from Reveal, from The Center for Investigative Reporting and took a number of months to put together. The team who created it included ProPublica environment reporter Lisa Song, news applications developer Al Shaw, video journalist Katie Campbell, and Vox-ProPublica video fellow Ranjani Chakraborty.

The ProPublica team started looking into levees in the spring of 2017, according to Song. They interviewed scientists who studied levees in the US mid-west, and delved through all of the academic research they could find about levees. “To be clear, the academic research we were specifically interested in, were examples of how levees make flooding worse,” Song said. “This was one thing we found in our reporting, was that everyone said levees make flooding worse, and you know it happens, but there are few case studies about this particular thing happening at specific locations in the real world. And that was what we were trying to find.”

As they delved deeper into research, they got the idea to do a clear explainer on how levees can make flooding worse. “I’d been talking with a friend of mine who is a geology professor and he knew that this lab at the University of Minnesota makes these large scale models,” Song recalled. “He suggested, maybe almost as a joke, that we could maybe do this. And then we mentioned the idea to our editors and were shocked they said yes.”

1/ Can a levee protect one town while making flooding worse for others?

The answer is known to scientists and supported by basic physics, but we wanted to see it for ourselves. So, instead of waiting for a flood, we built a model river valley & flooded it https://t.co/jQmjivpHno

The team hired engineers at the St. Anthony Falls Laboratory at the University of Minnesota to build a 10×13 foot working model of a levee, to help simulate basic physics. To be able to tell the story in the way they wanted – without waiting for an actual flood – with an exact scenario to show different theories was critical.

“We felt that it would be a lot more fun to show a real levee than to show a computer simulation, which we could have probably done, but it wouldn’t have stood out in the same way,” Al Shaw explained.

The team also produced a companion story about Valley Park in Missouri called “Flood thy neighbour,” and a podcast, in addition to this interactive page. “We wanted people to be able to read about a place in the real world and see the miniature at the same time, and be able to connect those two in their minds,” Shaw said.

The interactive page helped explain the science involved in the larger levee investigation the team was working on. Campbell and Chakraborty made the video, and Song worked on the text for the page. Shaw built the interactive that allows people to turn water off or on, the graphics and the maps. “We worked with a researcher who built us inundation maps for the Wabash River in Indiana, and what that area looked like before and after levees were put in,” Shaw explained. 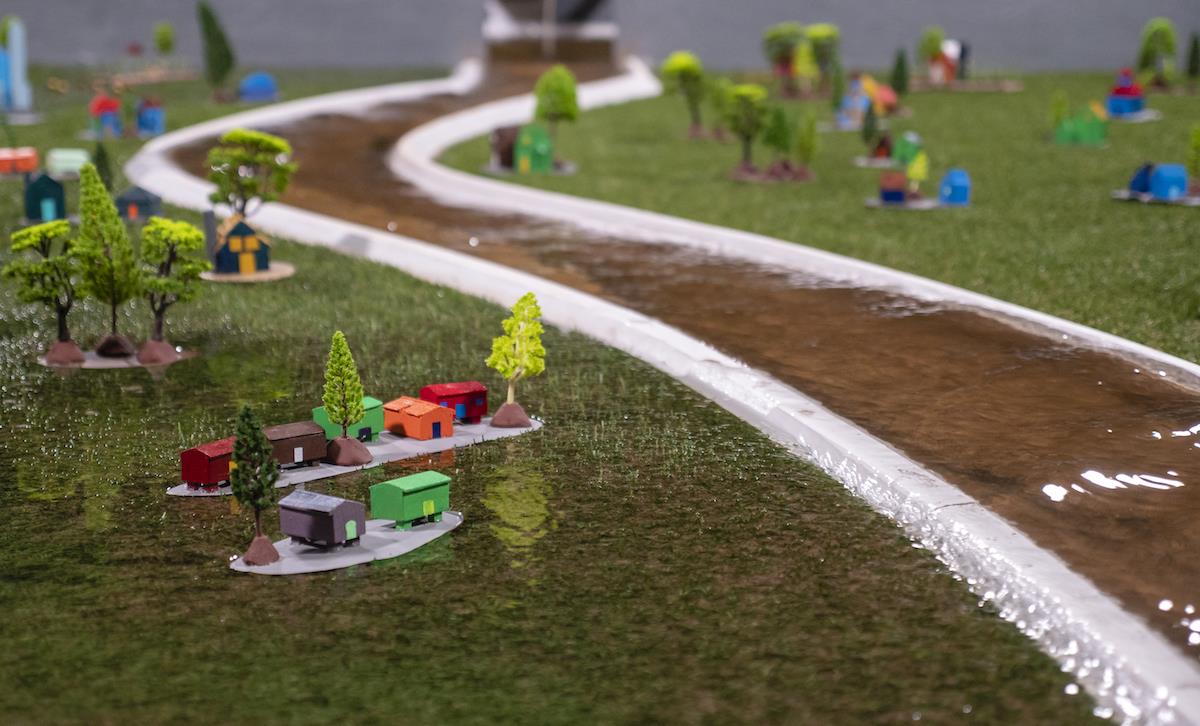 It was important the interactive be interactive – with an on switch that adjusts water flow – so  users would understand how levees work and what happens when water volume and flow increases. In this sense, there is a game element to the feature, where users can play with the model.

“I think you get a real visceral reaction when you can play with the model yourself and turn it up and down and see what the effects are,” Shaw said. “We wanted to make it seem like the reader was actually in the lab with us, playing around with this giant model and reacting to it the way we were reacting to it, as they were turning up and down the water.”

The page itself had a lot of different multimedia elements to it – a video, graphics, text, photos, an interactive – so many that the ProPublica team storyboarded it. But, with all of the elements to consider, they had to go about storyboarding in a different manner.

“With this video and all of these elements, it was different than the way journalistic video or documentaries are often made,” Song explained. “Normally you would go and gather material and once you have a huge pile of material, you’re sifting through it to find the relevant and compelling moment, to write the script and make the storyboard and put it together. With this, we had to completely do it the opposite way. We had to figure out exactly what we wanted to do with the video. We basically had it scripted a month before we started shooting.”

The video shoot for the interactive involved a lot of planning ahead. The team spent a lot of time talking with the university lab about what materials they wanted, what the grass would look like, what colour the levees were, if there was going to be sediment in the river, and how high the channel would be in relation to the width of the flume. They wanted to keep it accurate, but this model was by no means a perfect scaled ratio. 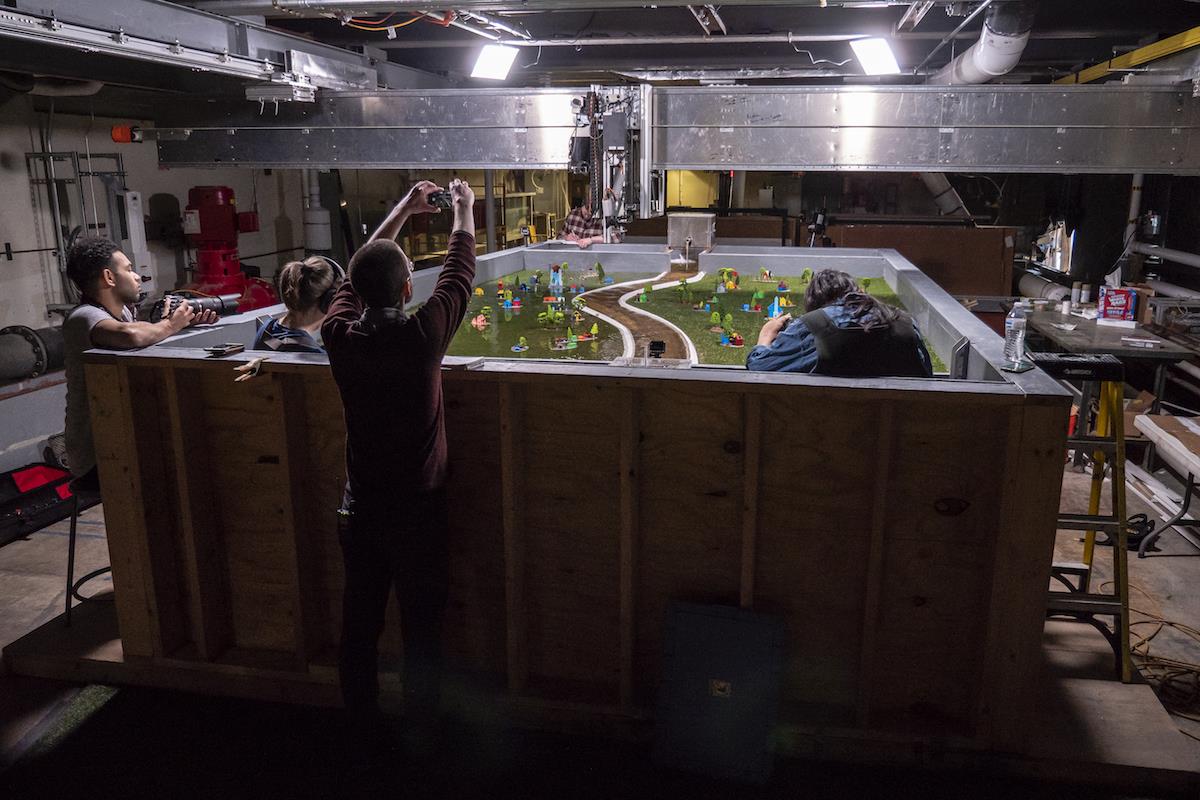 “When it came down to to the shoot, it was a week, with an entirely new scenario every day,” Campbell said. “The scientists would build the scenario and we’d flood it, and film it from every different angle as it was being flooded, and all we got was one shot, from the time the water starts to the time it is flooded.”

At the end of each day’s shooting, the team had to dry out the model with fans and squeegees and construct the next day’s model. They started with a floodplain with no levees, and shot that, and then the setback levee, and then the close levees, and the final shoot was an unequal levee.

And then there were the houses. 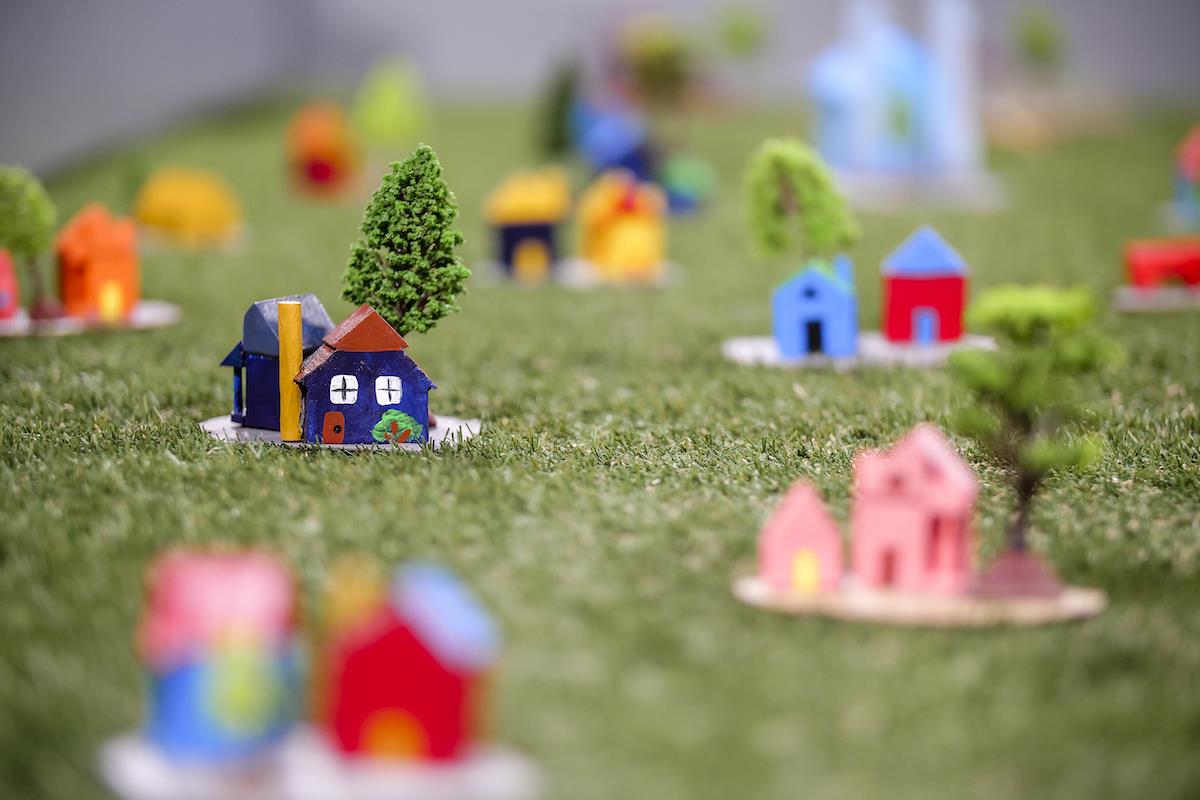 The tiny wooden houses that dot the video and interactive of ProPublica’s feature page are brightly coloured, little wooden houses. It wasn’t originally part of the plan to put houses into the model, because editors didn’t want the audience to think it was a particular city or town. “There was an opportunity to help people understand it more if they could see themselves in there, and that’s what the houses became, a stand-in for an audience member who could be living in one of those houses, even though they’re totally handmade,” Campbell explained. 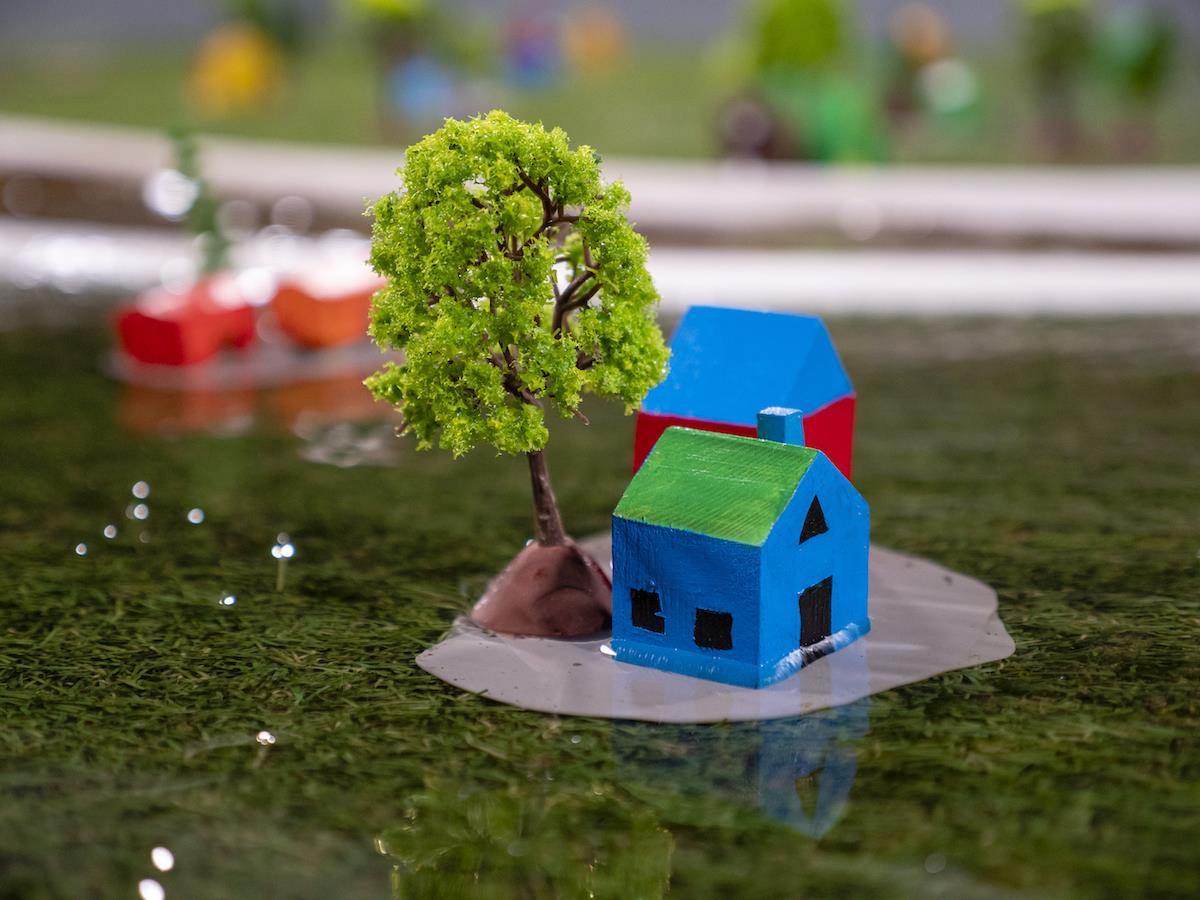 The houses were an interesting part of the creation of this story. Two of the teams’ dads agreed to make more than 50 miniature houses for the feature, and sent them to New York, where the ProPublica team had taken over a conference room to paint them with waterproof paint. “And, then we had a painting party here at ProPublica, where all of our colleagues joined in painting them to prep for them for the model,” Campbell explained. “It was an all-hands-on-deck project, which was really fun… It’s the most arts-and-crafty I’ve been in my whole life.”

It took the whole @ProPublica family to paint dozens of tiny houses for our levee investigation. https://t.co/kcHdimr8YF pic.twitter.com/ihPRaAuT9e

The biggest challenge for the ProPublica team on the creation of this interactive feature, and its accompanying article and podcast, was journalistic in nature. “I think the biggest challenge was, how do you make something that on the surface is as boring as levees and concrete embankments, how do you make that interesting to the general audience?” Song asked. “Its a fun challenge to think about: can you make people want to learn about something like this?”

Shaw, Song and Campbell say they’ve heard from scientists, engineers, news reporters, geologists, friends and colleagues, too. “It certainly went beyond the niche audience, because the video has more than one million views at this point, that’s not typical for a science story,” Campbell said. “And, I think that’s sort of a mark of how it does reach beyond the science community.” 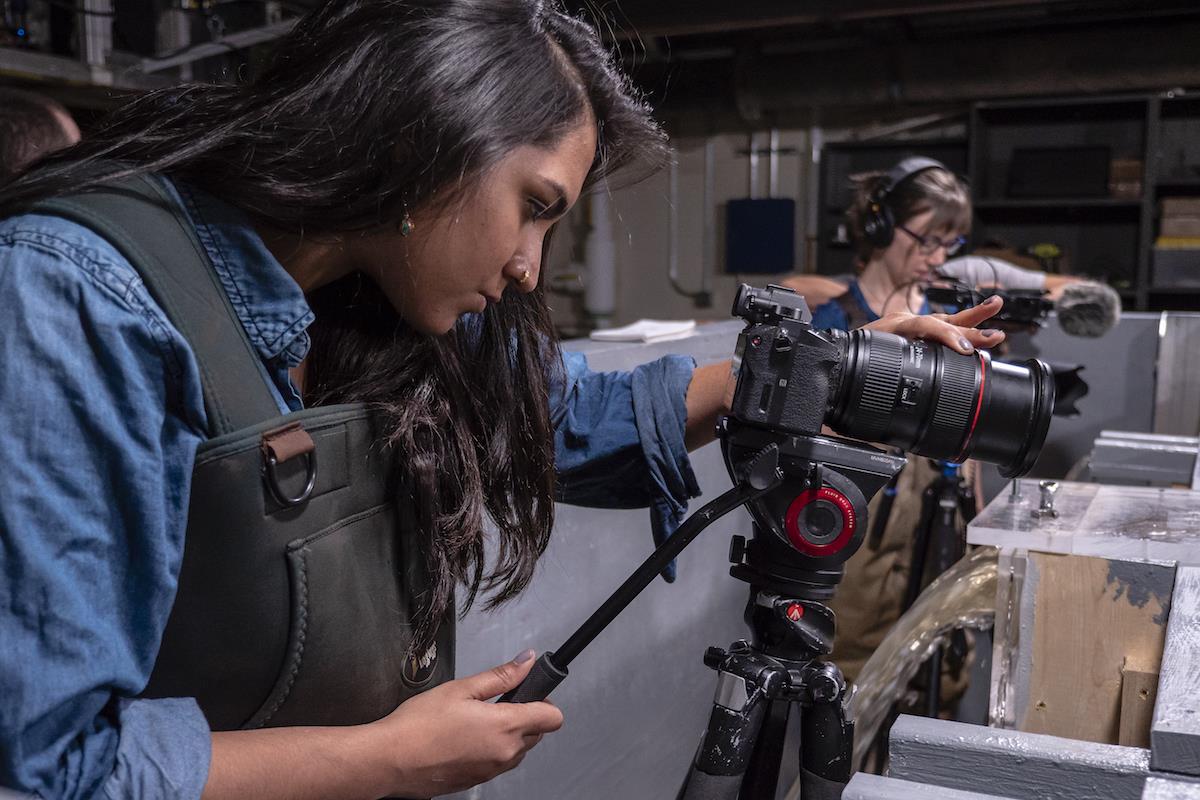 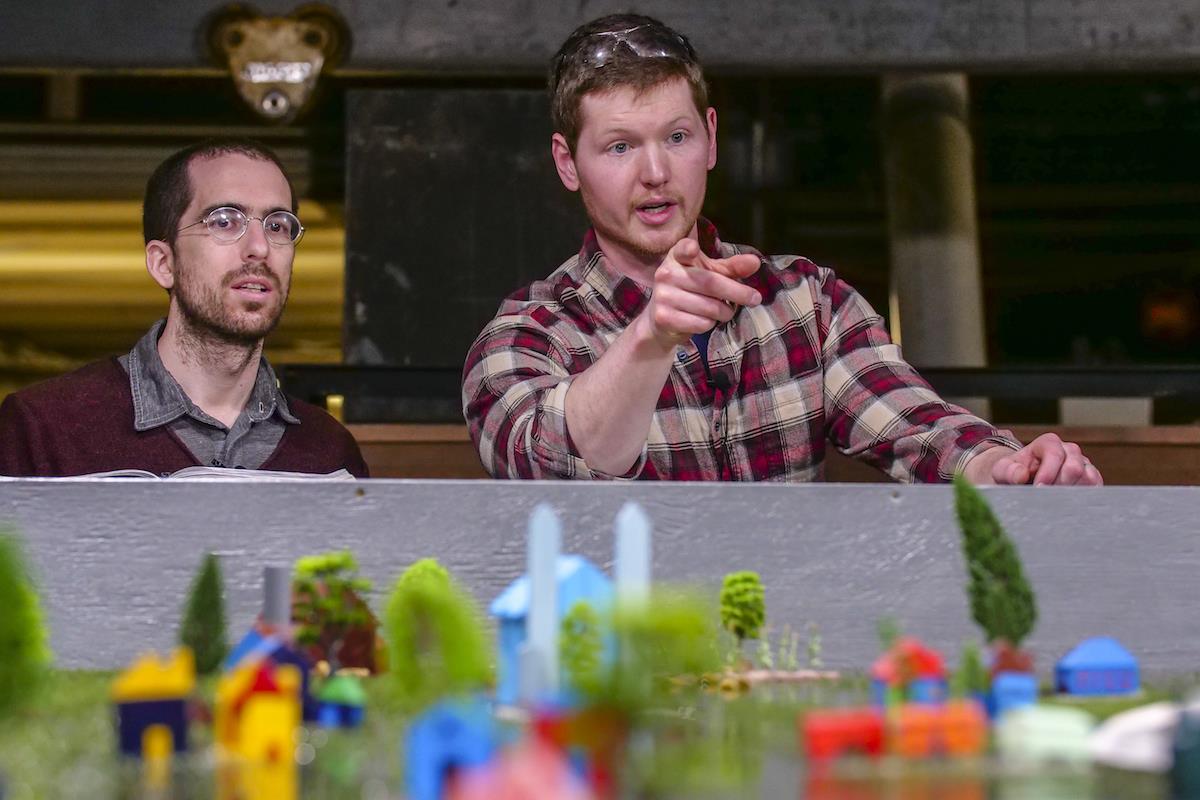 As a case study in itself, ProPublica’s interactive page and accompanying investigative story is an example of what can happen when newsrooms use individual team members’ strengths and allow for creative projects or new ways to tell stories.

“Something that was special that happened within this project, is that you had a bunch of different people who had these special skills… but we were able to come together with these different superpowers and figure out a way to make something bigger and better than each of us could do on our own,” Campbell said. “I think that in a lot of newsrooms, people work solo, in isolation or in various silos and I think the kind of cross-pollination that happened with this project is was part of what made it so awesome.”

Song said she was pleased that the ProPublica newsroom let the team do crazy interactive things like the feature. “I think there are few newsrooms that would have the resources, but also be brave enough to let their reporters go off on this weird idea,” she said. “We did all of the meetings, handled the design, planned the schedules. In a certain way, the editors trusted we would make it happen.”