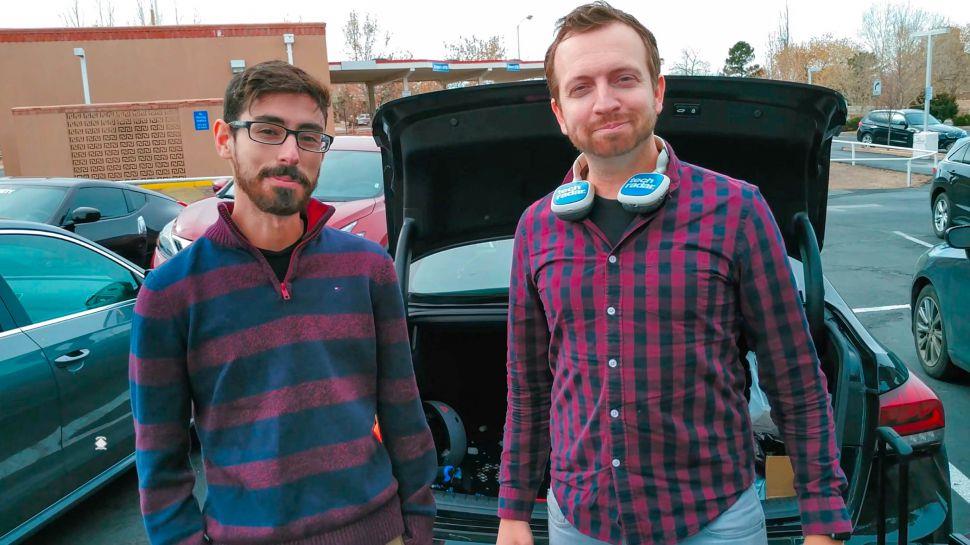 But they weren’t just driving cross-country for vacation.

Swider, senior mobile and buying guides editor and Pino, senior home entertainment editor, were on their first live, cross-country road trip for TechRadar, traveling 2,500 miles from New York to Las Vegas on the way to the Consumer Electronic Show 2018.

The trip began in New York City, and over seven days, across the US with stops in Washington DC; Knoxville and Memphis, Tennessee; Oklahoma City; Amarillo, Texas; Santa Fe, New Mexico; and Monument Valley, Arizona before arriving in Las Vegas on January 7.  The trip, “The Road to CES,” was sponsored by ZTE and the ZTE Axon M, with car transportation provided by Hyundai.

The team documented their journey using a variety of technology, posting content including live shows, articles, guides on their website, via a live blog, and on social media, with the hashtags #TRCESRoadTrip and #CES2018. At the same time, they were analysing an array of consumer gadgets and posting daily vlogs shot with the new, foldable ZTE Axon M smartphone. Tech they brought with them on their road trip included a Garmin dash cam, a hotspot, a bunch of GoPro cameras, and a DJI Mavic Pro Platinum drone.

All of this content was produced on the go, so, FIPP spoke to Swider and Pino as they were driving about the tech publishers might use while in motion.

Tech on the go

“The most essential gear for modern-day storytelling is a memory card or external hard drive with ample space,” Swider said. “Whether you’re taking photos or recording video, having an organised way to sort and backup your data is the best pre-planning advice we can give for content production. With our seven-day, gadget-fueled road trip, we knew anything could go wrong. Keeping our data safe was something we couldn’t compromise on.”

One of the tools at their disposal was the ZTE Axon M, a brand new foldable smartphone, which they used to shoot daily vlogs.

“It’s a foldable phone with a hinge in the middle and two screens on either side,” explained Swider. “You can fold it down so the screens are back to back, or you can expand it out and it looks almost like a tablet. And what’s great about that is, it’s not a plus-sized phone, it’s easy to manage, but also you have what looks like an iPad mini in your hand. So, if you’re on a flight or on the train, you can look at a large, full-sized video, it’s not a problem.”

Swider called the smartphone the best of both worlds, as it’s both a smaller phone model but expands to become a tablet the size of an iPad mini. While there aren’t many apps that use the dual screen technology yet, Swider did suggest one they found interesting: “You can play a game of Battleship, which is a two-player game using the dual screens on your phone. You’re able to semi-fold the phone and you have one person on one side of the table and one person on the other.”

Preliminary agenda | Save by booking now

The editorial team posted video across their social accounts and website, chronicling their journey and analysing technology. The editorial team relied on a variety of devices for video footage, including Snapchat Spectacles that Swider bought last year. The team also used GoPro cameras and iPhones to get multiple camera angles of the entire trip, and a DJI Navic Pro drone. “It’s probably one of the best drones out there that you can buy, for a little over US $1,000 and it takes great aerial footage,” Swider said.

“We’ve also brought a Garmin 65W, a dash cam, and I think that’s neat because we’re using that in some of our video footage,” Swider said.  “Dedicated dash cam are really helpful and easy to use. It has a dedicated function of a time lapse and it isn’t as expensive as a GoPro, so that’s kind of something we want to highlight that’s kind of interesting and it’s also a safety feature. If anything ever happens, then you’re able to get footage of it.”

Each day, the team maintained a blog offering a mix of travel and tech content, and wrote about the gear they used and road trip-related content like best tech for road trips and best road trip planner apps.

At one point, Swider and Pino took the Axon M smartphone, an original iPhone 1, and a couple of other phones, and did a ‘smartphone shootout.’ “Monuments make for great vacation photos,” said Swider, “So why not use a smartphone camera comparison to show what real life photos people take, how they compare from a phone from 10 years ago, to today’s smartphones.”

Challenges on the go

Being on the road came with its own set of challenges for the TechRadar team. “Producing content on the go multiplies the challenges,” Pino explained. “You need everything with you ahead of time, yet you usually have a finite amount of space to carry all of your equipment. Having enough time to plan out out-of-office content production is the key to successfully pull off this feat.”

At the same time, the TechRadar team has also had some fun along the way – stopping in to see landmarks and monuments in Washington, D.C. and Memphis. “When we went to Washington, D.C., we got to go on the Lincoln Memorial Reflecting Pool, which is iconic and famous,” Swider explained. “But, it was frozen over. There was a sign that said, ‘do not go on this, at risk of injury.’ Of course we were going to go on it and take selfies.” 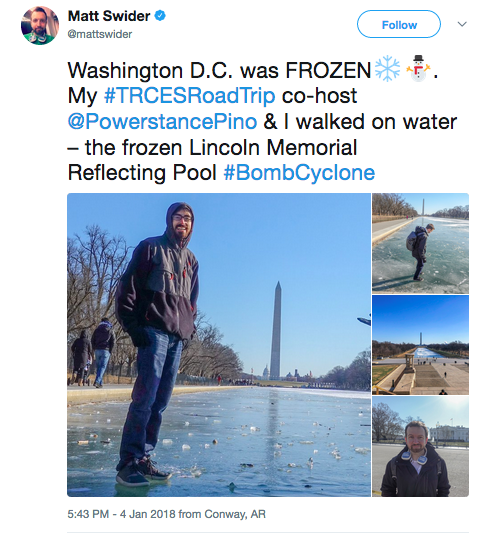 For publishers who are on the go, posting content while traveling requires putting the right resources in place, whether that be lining up a content calendar in advance, or having people to help out along the way. Having the right tech is also key.

“I think a lot of it came down to having the right equipment, but that’s only half of it,” Swider said. “The other half is reducing the bottleneck of trying to compile the video footage you have. So, while these things are great, it’s all about editing it. We have a video editor, Paul, with us. And that helps our storytelling.”

As for Swider and Pino, the fun didn’t stop in Las Vegas. While at CES 2018, the TechRadar editorial team judged the TechRadar CES Awards, an annual awards program honoring the most innovative gadgets and electronics of the year for consumers showcased at CES. 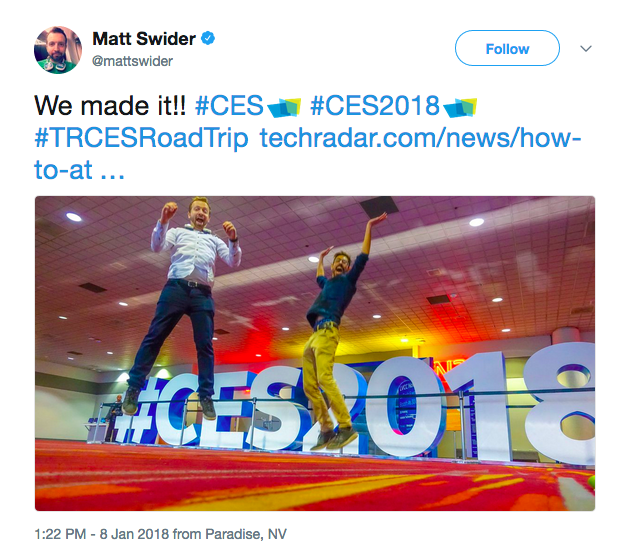