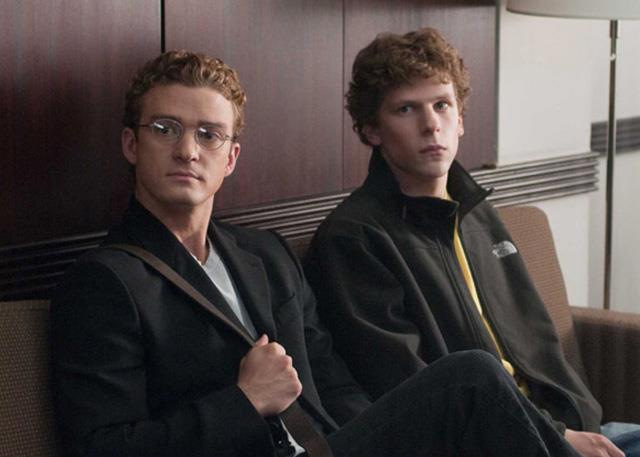 Jesse Eisenberg and Justin Timberlake in The Social Network

And it’s true. Rarely do I have the opportunity to hold one over my wonderful mum… but the computer, the glorious computer, presents me with that rare opportunity for the apprentice to become the master!

My mum rushes to the tired old defence of: “You’re lucky, it’s only because you happen to have been born in the thick of the computer age that dealing with these problems comes as second nature to you.”

What’s interesting is there is another side to this argument: we have grown up in the online barter economy, but never actually realised that we were bartering ourselves.

My mother has sent letters in the post, made calls from a landline and printed photos to store in binders. All costing her money. Some of you reading this will even laugh at the concept of renting films or buying CDs!

All these services were digitalised, legally or illegally, and offered at a time when a whole generation was at its most cash strapped. I remember huddling around a tiny laptop in my first year at university, watching the latest episode of The OC on DC++ (essentially an illegal precursor to Netflix).

Or leaving my computer on overnight to download a new album from Napster (abused precursor of Spotify, set up by the famous Sean Parker). Those that created, or could find and access such services, were not deemed as thieves but savvy users who could bend the web to their wills like Neo bends the Matrix (really showing my age with that reference).

To us, the web was open access. We had never been told otherwise, and it never crossed our minds that this was little different to the fake DVDs or sunglasses that we are all quick to turn our noses up at. Why pay for a service that was being offered for free by someone else?

But the times, they are a changin’…

The founders of the first Internet companies are growing up, and the web is growing up with them. Seamlessly symbolised with Sean Parker’s transition from Napster bad-boy to board member of tech unicorns Facebook and Spotify.

But what is really fascinating to observe is that users of the web are growing up too. As we start to understand the barter exchange we unwittingly entered into, we start to value ourselves and our data versus the services we are accessing.

Advertisers and publishers need to ensure that there is a fair value exchange for their consumers, or expect to lose them.