Select All explores technology and offers smart and critical analysis of social media, consumer technology, digital culture and specifically memes, about the ideas and jokes and images and videos that travel through culture online.

So, it wasn’t a stretch that the team came up with a stunning year-end feature to cap off 2016. 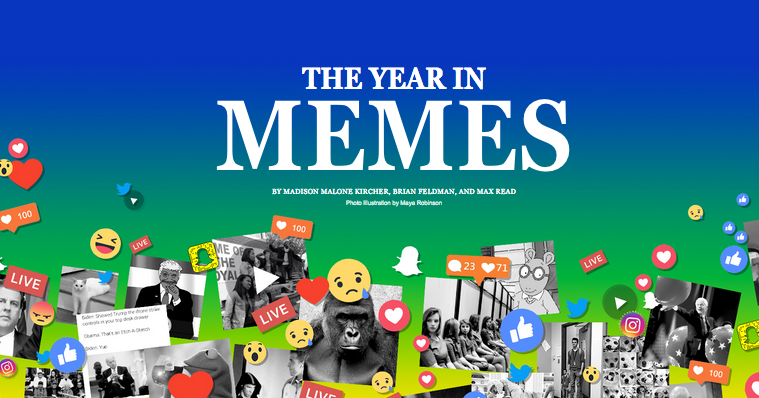 “We felt that 2016 was a year when memes had a bigger impact than they’ve ever had before in terms of the ubiquity with which they moved around the culture,” editorial director Ben Williams told us. “Obviously memes have existed for a long time now, but it was just, the rise of [multiple] social networks, particularly, has enabled them to spread a lot further, a lot quicker than they were before and to cross different social networks.”

2016 was the year of the meme, when national news media were obligated to discuss them and presidential campaigns wrote about Pepe the frog.

“There were just an incredible amount of brilliant, funny, creative and sometimes scary memes that were created in 2016… we wanted to remind people of them,” Williams explained. “The calendar idea was a good way to trigger people’s memories and demonstrate how powerful memes are in today’s culture.” 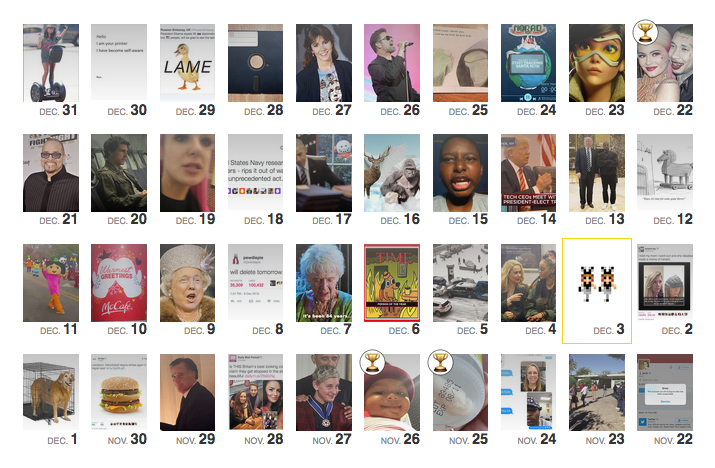 Building ‘The Year in Memes’

“The Year in Memes” took about two months to go from idea to interactive feature and involved a number of staff:

At the beginning, Read, Kircher and Feldman worked on putting together a list of 366 memes (366 because 2016 was a leap year!). “We started by going through our tagged posts – anything that Max or Brian or I had written over the past calendar year about memes,” Kircher explained.

Trying to decide what became a meme became the biggest challenge, according to Kircher and Feldman. Feldman said it was tough to qualify what a meme was and what to include in the calendar. Was it a good tweet? Or, just a viral video? What classified a viral phenomenon versus something people thought was funny one day?

A meme had to be something that travelled extensively online. It was a “mutating, evolving, self-replicating units of culture,” that passed from person to person on the internet that had been remixed or modified, or used in some way. “A meme is a viral trend,” Feldman explained. “The defining characteristic of it is that it gets remixed. Different people make different versions of it.”

All of the information was put into a spreadsheet, with names, links, dates and categories. Read, Kircher and Feldman worked on editorial copy for each meme. Then, the text was edited month by month, copy-edited and fact-checked. The blurbs for each month totaled somewhere between 2,800 words and 3,200 words. The entirety of the feature ended up being over 30,000 words, with an additional short essay at the top.

At the same time, interactives designer Ashley Wu worked on the design and coordinated with editorial. She laid out all of the pieces to see how they would work together, including “figuring out the user interface (and experience), seeing how things would open up and should we have embeds for all of the tweets we’ve included, or should we just have a photo of the actual meme?”

Taking inspiration from Slate magazine’s Year of Outrage, Wu storyboarded the feature, and created mockups. This feature was photo and image heavy, because memes could consist of images, videos, vines or tweets. Wu figured out how to lay 366 elements out, and make it intuitive, but not heavy on the page. 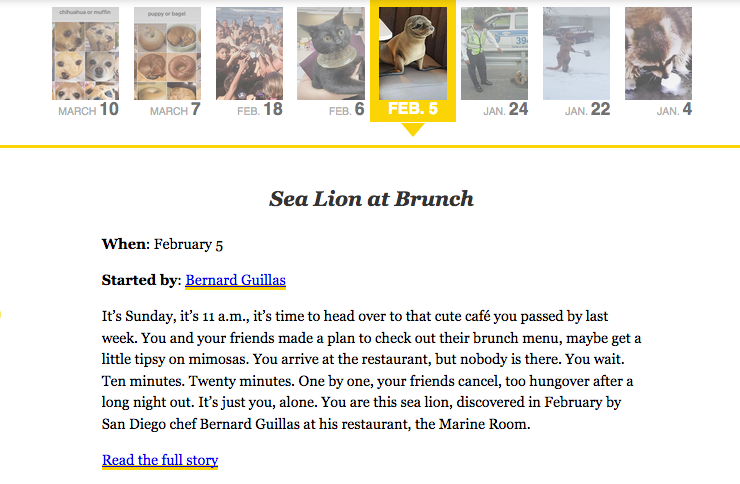 The New York magazine team involved in creating “The Year in Memes” came across challenges both editorial in nature and from a design and development perspective.

Editorially, the feature presented issues simply because of its scale. The initial research and collection ended up being labour-intensive, according to Max Read. Read, Feldman and Kircher were able to fill in half of the 366-day calendar with content they’d already written.

“We were always confident that we would be able to find 366, but doing it in chronological order, day by day, meant we had gaps,” Read explained.

According to Kircher, there were seven or nine days where there were no memes to be had. “We really had to dig through the internet to find some memes that didn’t necessarily happen in the United States, or maybe happened on a platform none of us were particularly big on, to fill in those last gaps,” she said, adding they surfed the internet and read digital culture content to find material to fit.

Another challenge the team faced was on the design and development side.

For Wu, the challenge came in figuring out how all 366 memes were going to work together on a single entity, especially on mobile.

“We didn’t want anything to pop up, so we wanted everything to push down,” she said. “I took inspiration from Google Images, because they have everything pushed down, so you’re not closing out of any modules and it’s not overlapping any content.”

“I thought, especially for mobile, people have such a small screen, you want to make it as easy as possible for people to look at as many memes as possible,” she said.

One of the issues that web developer Chris Kirk discovered was that he had a lot of data that was supposed to be hidden. “You can’t just give the user 366 videos all at once, otherwise it will crash their browser,” he said.

On top of that, Kirk said they’re still figuring out a way for their internal CMS to be flexible enough to support a project like The Year in Memes again without crashing.

“It’s built with a sense that whatever is on the page, will be the only stuff on the page for the lifecycle of the page, where as in this case, if you click a button a bunch of new stuff appears, you can filter the stuff, get taken to a random one, and throughout this, ads have to be interspersed, so there’s a lot of dynamic view generation that the CMS isn’t built for,” he explained. “But, we’re already making changes to it, to make projects like this easier to do and more stable to publish.”

“One thing that is nice about this project is that, by their nature, memes are ephemeral,” Read explained. “People were discovering stuff they hadn’t seen before, because they’d blink and it’d disappear from the internet.”

Williams said the story did well on social networks. “You can see with the tracking tools we have, who is talking about your stories. We saw people picking out individual memes and being like, “OMG, remember that?” or “This was the best!” or sometimes people would say “This was my birthday meme.”

“With something like that, since it is an inherently kind of social media friendly story, because it comes out of social media, it feeds back into it, and you see people talking about it in different ways,” Williams said.

Reaction outside of the social spheres was also positive – “The Year in Memes” was named a finalist at the 2017 National Magazines Awards for Print and Digital Media in the multimedia category which honours digital storytelling.

Looking at “A Year in Memes,” the interactive feature appears simple and elegant in design and easy to navigate, but a lot more went into it than appears.

Kirk suggested that interactive features like “A Year in Memes” requires a level of planning that most projects do not.

“One of the challenges with a project like this is that it requires a great deal of work and that work can seem vague, because it wasn’t something we’d done before,” Kirk said. “We hadn’t built something like this before, (so) it was difficult to estimate how much work it entailed.”

“It’s important as you approach a project like this, to remind yourself that the project you’re envisioning is a lot of work,” he added.

Read and Feldman echoed Kirk’s remarks, suggesting for publishers looking to build immersive, interactive features like “A Year In Memes,” it is a worthwhile reminder to plan it in advance. “When you have the idea, start work then instead of sitting around and thinking you still have plenty of time,” Read said.