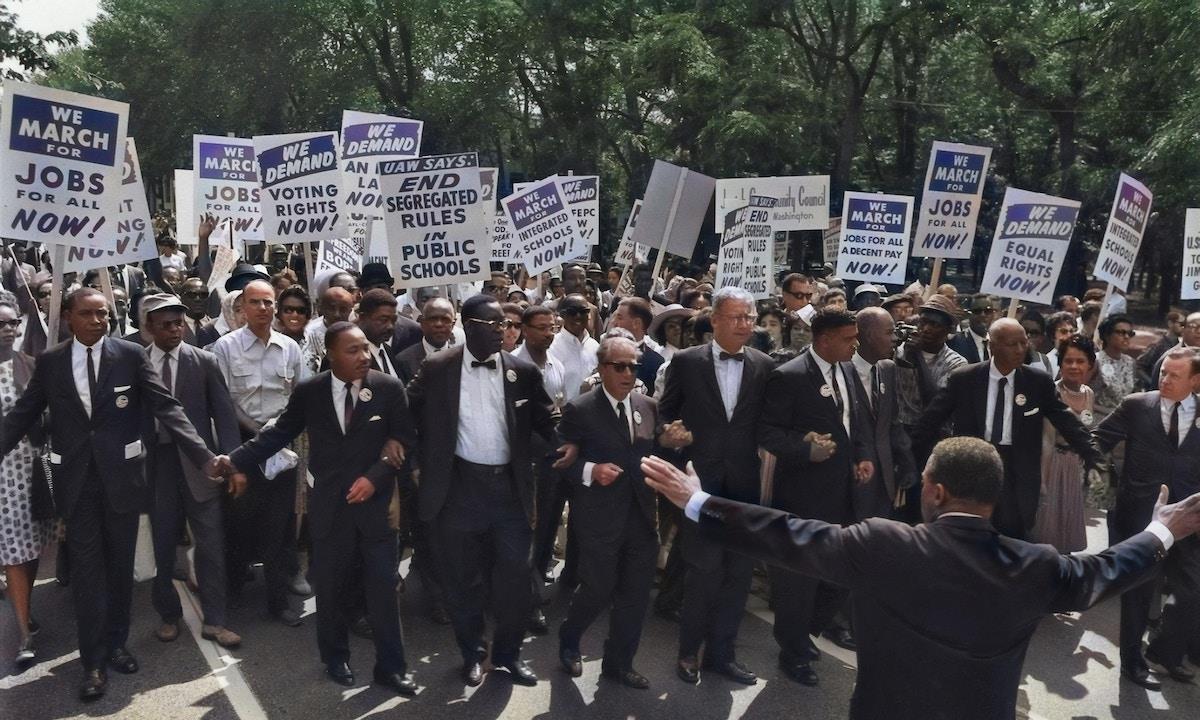 Photo by History in HD on Unsplash

The new immersive, virtual reality project, The March, offers audiences the experience of the historic March on Washington for Jobs and Freedom, in a room-scale VR experience. The project is a partnership between Time, immersive media studio Ryot, V.A.L.I.S. studio, and the Estate of Dr. Martin Luther King Jr., which granted development rights to Time for the project.

Virtual reality is an incredible tool for historic re-creation and education, and a powerful vehicle for storytelling, according to Mia Tramz, editorial director of enterprise and immersive experiences at Time. “We’ve really tried to align what it is that the brand does best, which is putting an authoritative stamp on a moment in history, a news event or even a person, and marry that with the legacy of powerful visual storytelling that the brand has through photo and video. And now, with these new technologies.”

While virtual reality is new territory for some publishers, The March will be the second instalment for Time. In 2016, Time Inc.’s virtual reality brand Life VR produced Remembering Pearl Harbor, which commemorated the 75th anniversary of the attack on the US naval base.

“Whenever I’m applying new technologies to our brand, I try to be cognisant of Time’s legacy and the relationship that readers have with the brand,” she said. “So many people have grown up with Time – it’s been a part of their lives, their families, their family’s history – we never want to do anything with a VR, AR or any other technology that would make someone who loves the Time brands scratch their head or say, ‘why is Time doing this?’”

As a magazine media brand, Time captures the events that shape lives and insight on the people, places and issues that matter. Time puts a lot of work into making sure that the journalistic rigour the brand is known for, is applied to their virtual reality projects, Tramz said.

For example, in the Remembering Pearl Harbour experience, even though the environment was entirely CGI, the objects in the experience were rigorously researched and authentic to the period – down to the tunes playing on the radio or the weather outside. “What we’ll try to do with this experience is look at the ways ways in which you might test the reality of what you’re seeing and make sure that whatever answer or feedback you get is based in fact,” Tramz said. “And, it’s based in a lot of reporting and research.”

This time, Time’s The March aims to bring audiences virtually into a pivotal moment of American history, to August 28, 1963, when approximately 250,000 people marched through and gathered in front of the Lincoln Memorial in Washington, DC, to protest racial discrimination and advocate for civil rights legislation. The March will draw from the personal experiences of the organizers and participants of the March on Washington to present a layered and complex experience. The team is aiming for the experience to be divided into three parts – the March, the National Mall, and Martin Luther King, Jr.’s famous I Have a Dream speech. The project will mark the first-ever virtual depiction of Martin Luther King, Jr.

“There are so many stories we’ll be weaving in the experience itself and the exhibition that surrounds it,” Tramz explained. “We’re finding ways to bring the stories of the march organisers and architects and their voices have to the experience.”

Tramz explained that there were numerous organisers and volunteers that made sure that the march not only happened, but was a success. “There was a meticulous, careful, truly mind blowing amount of planning and work that was done. So, we’ll be trying to weave as much of the history and details behind the march itself into the headset and  out of headset experience.”

The centerpiece of The March will be the first-ever digital performance of Dr. King’s “I Have a Dream” speech, which will be produced using several state-of-the-art production technologies. The VR project will bridge the physical and the virtual – using photogrammetry, motion capture and 3D animation,  combining several cutting-edge VR and VFX technologies, to create an interactive experience where participants will witness the crowd of 200,000+, and the locations and events of the day firsthand.

The March is a demanding project in terms of its vision and ambition, said Peter Martin, founder and CEO of V.A.L.I.S Studio, who is a producer on the project. “We’re trying to do probably three or four things that have never been done before, certainly not at the same time,” he said. “Building the crowds of 250,000 people, being inside that, that has never been done in VR.  You see this great crowd shots now in films like Bohemian Rhapsody, but you’re flying over them, you’re not inside them. Looking at an iconic speech, with a ringside seat eight feet away, that has never been done.”

Tramz’s role at Time involves working on emerging technologies and producing projects that don’t sit within the bounds of our printed page or website. However, creating a project with as many moving parts as The March has, needed specialists. Tramz reached out to Verizon Media’s Emmy Award–winning content studio and innovation lab Ryot, and to V.A.L.I.S. Studio, as partners. “Every project I’ve done has partners of some fashion, whether it be tech partners or creative partners or financial partners or a distribution partners,” Tramz explained.

Time and Ryot have a history of producing innovative storytelling, working together on immersive projects, like AR-activated content for some Time magazine covers. “We were always very well aligned and how we’re thinking about the technology and what we want to use it for,” she said.

V.A.L.I.S. Studio came on board a year and a half ago, Martin said. “It was very early stages, looking at how we could even make this experience, and what’s possible, technologically,” he said. “We’ve been doing a lot of research and development on this project. We were wondering how cinematic could we make this look, how real could it look? So, I did a big deep dive into virtualising characters, photogrammetry, even looking at some AI and machine learning techniques.”

While the project is still in production – and doesn’t expect to be finished until 2020 –  the project team can only imagine some of the challenges.

It’s just one challenge after another, Martin said. The March is really unique in its level of ambition.  “Normally, you’re scaled back from the ambition by budgets, or distribution, or time. We’ve taken our time to get this right, bringing the right people and just give this story the treatment it deserves. So none of those things have actually applied to this project. You know, we’ve already been on it for a year and a half, and it’s going to take another year,” he said. “So, that’s one huge difference in the construction of this. But because of that, there’s a lot more pressure on getting it right so there’s no short cuts and there’s a lot of research and development involved.”

“This will certainly take a village to bring it to life,” Tramz said. “We’re getting ourselves as acquainted as possible with not just the march itself, but the civil rights movement, and all of the people that were involved in leading both the march and those moments in history. We’re sort of collectively tag teaming all of the different parts that needed to come together to bring this to life.”

Jake Sally, head of immersive development at Ryot, explained that it’s been interesting to problem solve across technology and the creation process. The March experience is designed to be for the people, he said, and just as important as the overarching message, is the diverse range of creators involved in it. “Each of us have worked on pretty far reaching, technologically difficult projects,” Sally said. “But this is, I think, definitely the paramount of all of those, across the board.”

Martin agreed, saying that having the right team in place is important. “You have to put these teams together,” Martin said. “They don’t exist right now, which is really the exciting piece of this. We need authentic voices in this. We’re putting together kind of an A-list of technologists and storytellers, people who have authentic voices.

One of the key challenges with virtual reality, is that it’s hard to get viewership because there isn’t enough of an audience base who have headsets. While she was at Time Inc., Tramz tested their VR and AR content with museums and public spaces. For example, Remembering Pearl Harbor was hosted at the Newseum in Washington and at the Intrepid in New York.

“All of the museums were open to letting us come in with headsets and see how their visitors reacted to it,” she explained. “What we saw on every single case was however many headsets we had and for however many hours or days they were available to the visitors at those locations, we always had more demand than we could meet. We’d have lines out the door, people signing up for time slots, waiting for time slots to open. The interest level was quite high.”

This field research informed Tramz’ strategy for how the Time team approaches virtual reality to this day.  In partnership with museums and public venues, The March will be available as a location-based immersive experience in select public spaces beginning in 2020.

Lessons and insight from the journey so far

While The March isn’t expected to launch for at least another year, all members of the team suggest planning is crucial. “However early you think you need to start, start six months earlier than that,” Sally said.

Tramz expressed the importance of magazine media being true to their brands. While new technology like virtual reality has storytelling potential, they might not make sense for every brand.

“These new technologies, you start getting excited by them and what they can do, but I would always say, you know your readership, you know your audience and think about what they would want to see from your brand in these new mediums versus what can you do,” she said. “How do you give them both an awe inspiring experience, but the real satisfaction of, ‘Oh, this is what Time looks like’ when you get to these new technologies. It should really feel authentic and well-integrated into everything else that you do.”

Continuing their endeavours in virtual reality, Time is also working on an immersive documentary series filmed on and around the International Space Station, called the ISS Experience. The VR series will be filmed over a year, and is in partnership with Felix & Paul Studios, an immersive entertainment studio. The series will be distributed as both a digital XR experience and physical ticketed experiential exhibition at select museums and public locations, according to a release. “This project will have a life on digital, immersive and physical platforms, and will ultimately serve as an educational experience to inspire generations to come,” Tramz said.