According to Grau, there are three important principles, or building blocks, at the base of building real-time algorithms: personas, evergreen content and unified metadata, he outlined.

Personas are profiles of target audiences, with names, faces, personal characteristics and media consumption patterns. Characteristics and behaviours of audiences can be incredibly useful for publishers, giving them a clear picture of the sub-segment of the audience they want to reach with a particular piece of content.

“The content we create is not about ourselves, it’s about our audience. So whatever I do, I would first think about building the right content strategy for the right audience. And I always start with personas,” Grau said.

Grau borrowed an example from Ebner Media Group, of a persona for an event-based special interest title. “Before we built the personas, the team, not knowing what the audience really is, published the magazine really just for the CEO of an event agency,” Grau explained. “But, that persona was the minority of the entire market. It turns out in Germany, the majority of the market were driven by two other personas: the executive assistant of the CEO of a large company and an event manager at a facility like a hotel.”

These two personas are responsible for most of the event business budgets in Germany, Grau said. There was no focused magazine for them. They had completely different content needs than the event CEO. After extensive research, including in-person interviews with the title’s readers, to solidify what they needed from the magazine media brand, “afterwards we changed the whole strategy of the magazine. This is why we looked at personas before we start thinking about real time strategy,” he said.

When Grau and his team did persona interviews with readers, what they discovered was that people had a manner of consumption that was different than they thought it would be. “It’s about understanding the audience, who they are, what they are reading and what time of day, what makes them successful or not in consuming that content. And what does it mean for us in terms of content production,” Grau said.

“People, when they read magazines in Germany and the US for example, most of them do not read a magazine from the first to the last page,” he said.

Instead, they really read the content by unconsciously structuring the content into minimum information units (MIUs): items like headlines, subheads, paragraphs, infographics or tables, atoms of content, which can be distributed across platforms. “That’s why building personas and understanding the minimum information units and human reading behavior, strange as it sounds, it’s critically important to building any new content strategy, be it digital, print, audio or video.” 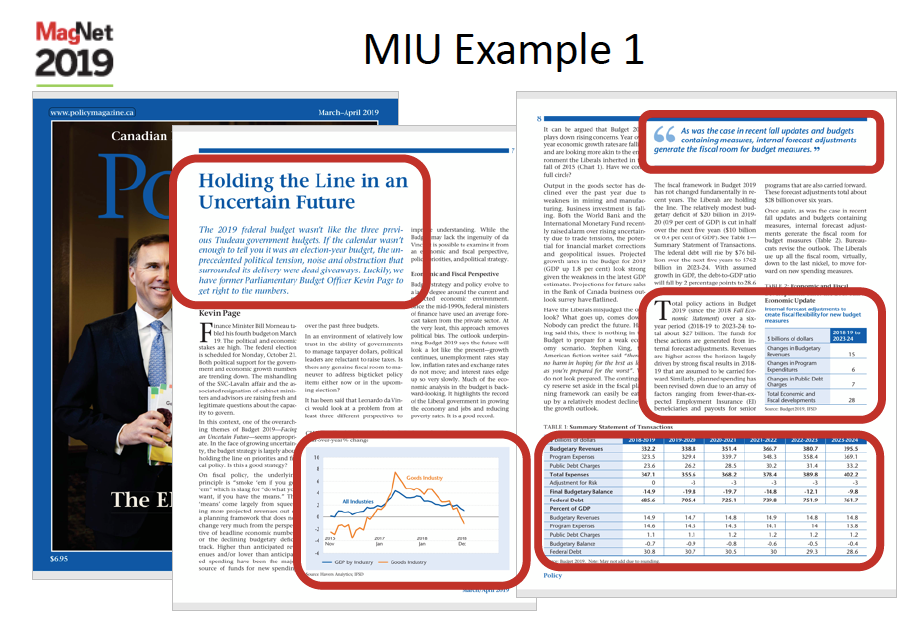 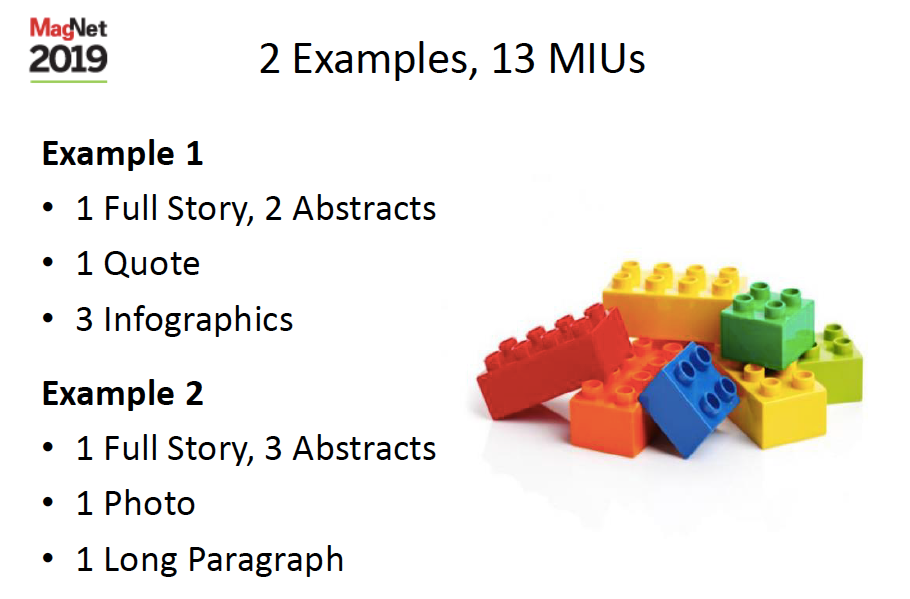 Another important block in building algorithms is evergreen content. Grau explained that when people aren’t reading news, very often and continuously they read evergreen content. “That’s a very interesting content consumption pattern that we usually forget when we talk about news and content,” he said.

In one example, Grau outlined that news represented 60 per cent of all content produced but only two per cent of traffic of a website he presented, whereas evergreen content got 84 per cent of the site’s traffic with only six per cent of the entire content. “And not only do these pages get most of the impressions, they also have the longest reading time, usually the reading time is twice as long on average,” he said.

Understanding of an audience’s future data needs and how they will use the content on an ongoing basis also figures into Grau’s strategy. He suggests building from the inside-out, looking at the content that is being produced, and describing what it is about into the metadata, and then building from the outside-in, looking into what people are searching for. 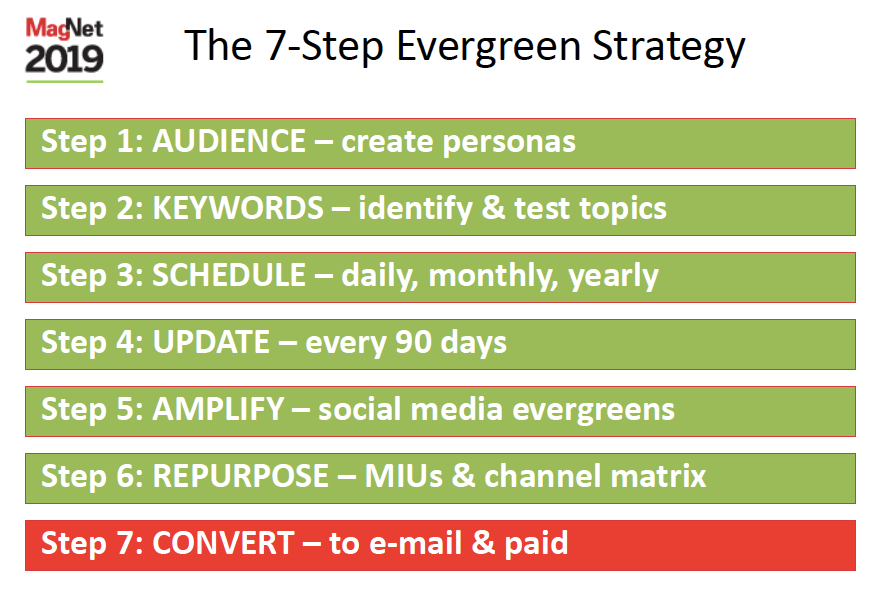 Building an algorithm from scratch starts with the three principles, or steps, outlined above. It’s about looking at the metadata a publisher has, what kind of quantity they publish, what measures and metrics have worked in the past that they know are true.

“When we talk about algorithms, what I always do first is, I want to know what the content really is about from a meta perspective,” Grau said. “Then, I look at the team, those who have the specialised skill set you need to build an algorithm.”

Then it’s about unifying the metadata across the entire tech ecosystem of the publisher: the content management system, asset management, CRM, ecommerce platform and any other tech platform. Once that’s in place the company will move on to building APIs for all systems to connect them so that on any content on whatever website, app, newsletter or other asset there is will be an underlying stream of unified metadata delivering content alongside commerce info and conversion elements – planned centrally, stored separately.

But, there are alternative ways to build such algorithms, there are tools to make the process easier. Grau warned that it still takes many weeks to build the initial setup if a company starts at zero without unified metadata structures.

Grau mentioned that tools including Ascent, Integromat, the latter an automator where publishers can link items together based on metadata or the tools already in place. There’s also an affordable and efficient tool called IFTTT, which can automate certain processes. Microsoft Flow is a more enterprise-wide solution.

Once built, Grau outlined the results publishers can achieve with real-time algorithms: automating event and webinar sales, automating selling products, subscriptions, events or webinars, driving conversions from content into newsletters into paid products or the other way round.

“I would look at the content consumption, would look at the time of year, when does it make sense to run an event like that or webinars, based on evergreen content analysis” he explained, “And then I would pull out the market marketing machines, based on whatever channel is needed based on the channel metrics I filled out after having done the persona research.”

Using in-depth content data to build out ecommerce widgets can be beneficial for publishers, he said.

Grau gave an example of a widget at Ebner with a conversion rate of 17 per cent.

“This is a pretty good conversion rate, but you need smart algorithms to build out these widgets, and once they’re in place, once you’ve got the metadata unified,  and you know what to do, it works well on a mostly automated basis.

Widgets can also generate additional data for publishers. In an example, a design website, “their conversion rate at that month is 17.6 per cent and the average transaction value generated after people click on these widgets is 17.8 Euros,” Grau explained. This is where the business perspective of any algorithm and conversion strategy starts. 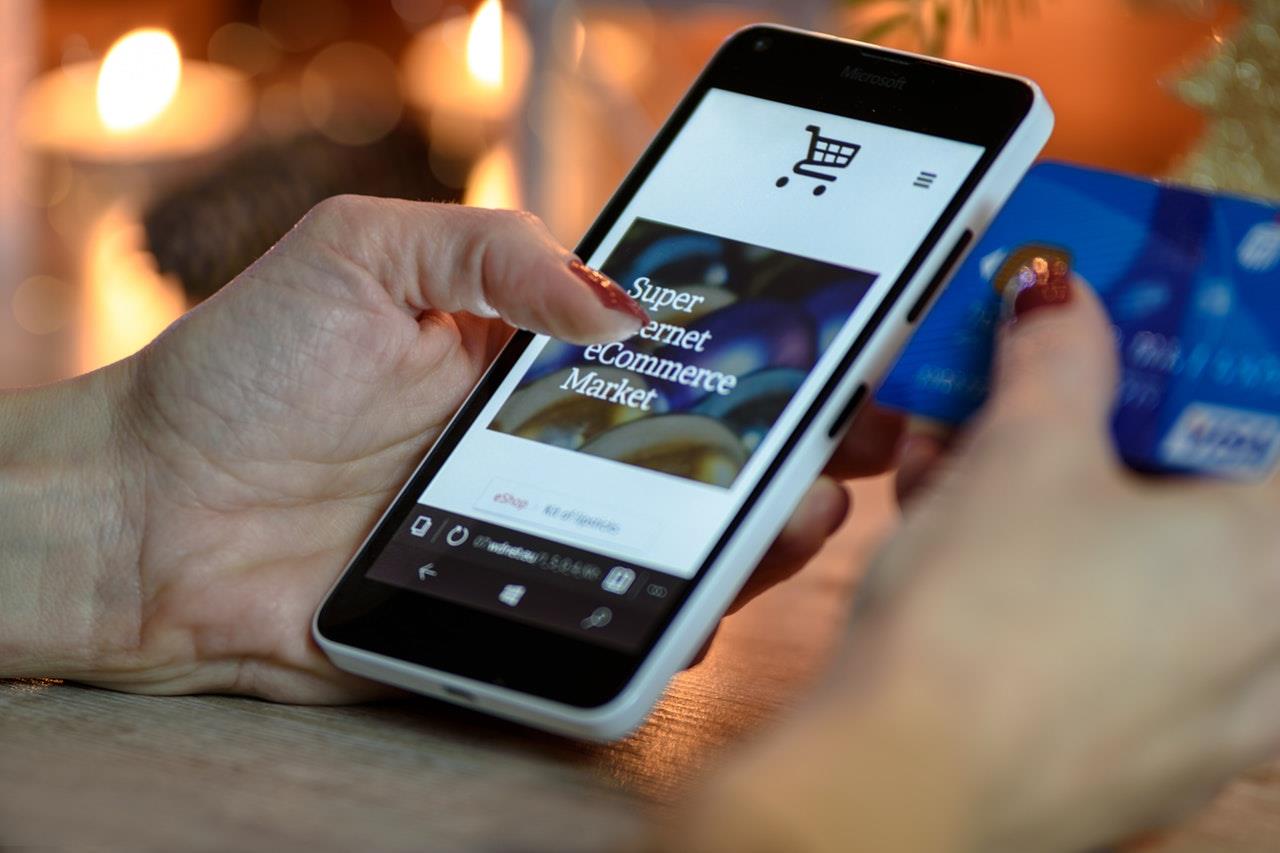 Chart of the week: Ecommerce is up and poised for further growth

Why Hearst’s BestProducts.com is an ecommerce testing ground for the publisher