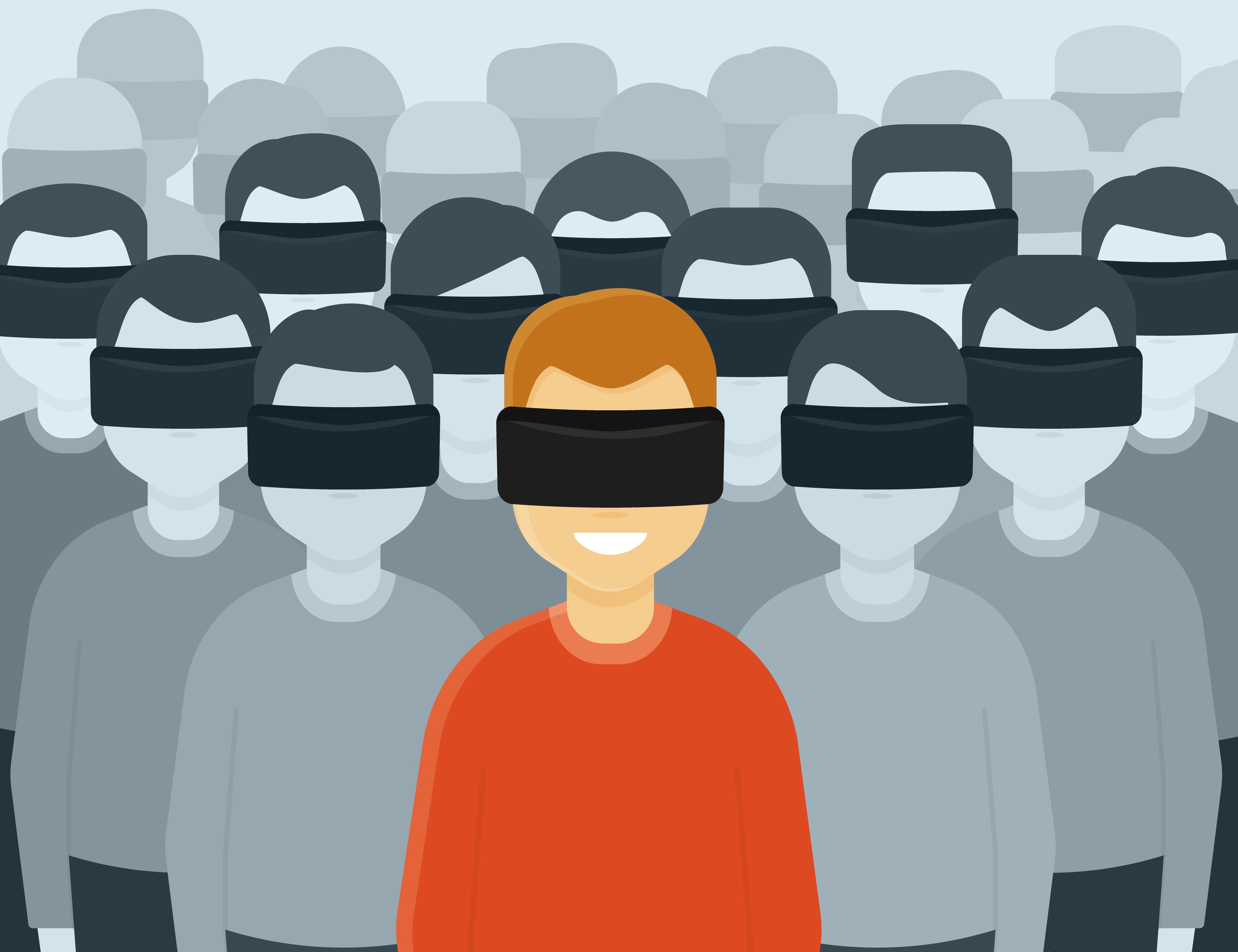 For many, the term ‘virtual reality’ conjures memories of the holodeck on Star Trek: The Next Generation or of the immersive imaginary worlds created in movies like The Matrix. Here on earth, we have a lot farther to go before virtual reality is indistinguishable from the real world. Recent progress, however, suggests it won’t be long before VR is a common way for us to connect with each other or with businesses and their brands.

Computer-generated video was applied to industrial applications as far back as 40 years ago and by the mid 1970s, flight simulators were using rudimentary 3D graphics. More recent advancements in hardware and software have enabled far more complex experiences, including immersive online environments, head mounted displays (HMD), and augmented reality (AR). Arcade games like Battlezone, and console games like the Tomb Raider series familiarized consumers with the potential for computers to create 3D virtual spaces. In the 1990s, HMDs from Sega, Sony and Nintendo were marketed as peripherals to gaming systems but none achieved substantial traction.

Rudimentary functionality, limited integration with popular game titles, and a price point typically in the $300-$500 range all contributed to poor market adoption of these devices. Meanwhile, developments in vector graphics were driving remarkable advancements in rich 3D environments created on flat screens such as TVs attached to gaming consoles, and standard PC or laptop displays.

Deep pockets are investing in VR

A new report from BI Intelligence estimates the global market for HMDs at 25 million units a year by 2020, which would represent a 99 per cent CAGR over the next 5 years. In dollars, that is a market expansion from a mere US$37m today to $2.8bn in 2020. Growth is credited to several factors including dropping prices, improved portability, and expansion of application for video entertainment and commerce.

The greatest sources of buzz in the VR space over the last few years have been the Oculus Rift and Google Glass. Oculus VR, founded in 2012 and grown via a $2.4 million Kickstarter campaign, was snapped up by Facebook in July 2014 for $2bn. The Rift is scheduled for release in the first quarter of 2016. Gaming is the most obvious application but the acquisition by Facebook suggests there are some social media applications planned as well.

Google Glass has gotten more press—both good and bad—than the Rift and is an example of augmented reality (AR) which is closely related to virtual reality. Distinct from VR, AR supplements or modifies visual input from the real world, rather than replacing your actual view. So far, the applications beyond gaming are more extensive for AR than for VR. In fact, Google Glass was more frequently positioned as a tool for productivity, education, and navigation than as a new gaming platform.

The Samsung GearVR and Google Cardboard are great examples of two important trends in VR hardware: affordability and portability. The Samsung Gear VR is a $199 wearable device designed by Oculus VR. With a Samsung Galaxy Note 4 smartphone strapped on the front, these goggles become a portable HMD. Meanwhile, Google Cardboard takes the concept of VR via a smartphone screen to the absurdly low prices (below $5) by using folding cardboard, cheap plastic lenses and a rubber band.

Initial applications of VR and AR for marketing and sales have been rudimentary or even gimmicky. Yet advances in hardware and software will bring these technologies squarely into the mainstream. Consumers will be able to interact with brands, products, and spaces in ways that are far richer and more engaging that what we’ve seen to date.

Matterport is a well-funded manufacturer of $4,500 cameras used extensively in the real estate industry   to create 3D walkthroughs of listed properties which are typically viewed on regular 2D computer screens. It won’t be long, however, before many real estate shoppers are using their HMDs to take 3D strolls through properties. Similarly, expect to see consumers experiencing immersive 3D tours of hotels, restaurants, or tourist destinations.

Volvo is experimenting with virtual test drives for car shoppers via Google Cardboard. Other scenario may include a 3D store environment where consumers browse merchandise and “handle” or interact with products in richer ways than online shopping currently offers.  Retailers are also thinking about ways to integrate VR into brick and mortar locations to help shoppers explore custom order items like imagining apparel, wallpaper and furniture in different sizes, patterns, or configurations.

To date, most HMDs were designed to operate while tethered to a computer. The video processing necessary to render the 3D graphics required the calculating power found in desktop or laptop PCs. However, smartphones are evolving to a point where they can render graphics with high enough resolution and refresh rates to deliver a satisfying experience.  Mobility is particularly important because the transformative power of AR comes from adding information to our world as we move through it.

VR has the potential to isolate users from the world around them but it also holds the potential to help connect people.  Massively multiplayer online role-playing games like World of Warcraft and online worlds like Second Life are proof that people are interested in interacting in virtual 3D worlds.

Facebook’s purchase of Oculus shows us the world’s largest online social network is thinking about how to extend online interactions into more immersive environments. Perhaps we’ll hang out with friends, take virtual walks, and watch movies together remotely while wearing HMDs. The business applications are promising but it will likely be years from now before telecommuting workers are conducting virtual meetings in virtual offices while wearing VR headsets.

Virtual Reality: The next big advertising medium is almost here