Here, Elrike Lochner, group head of digital at Associated Media Publishing and general manager at ampDigital runs through some of the challenges she and her company have faced and how they overcome them. She will be examining these issues in greater depth at at DIS 2019.

Can you give me a brief outline of your company and the role you play in it?

Associated Media Publishing, a privately-owned publishing house, was founded 34 years ago by renowned editor and publisher, Jane Raphaely. It is now headed up by FIPP board member Julia Raphaely, her daughter and CEO of the company. The company’s portfolio includes Cosmopolitan, House & Leisure, Good Housekeeping, Goeie Huishouding, Marie Claire and Women on Wheels. It is an independent, female-led company that reaches more than 20 million consumers monthly through its print and digital channels.

AmpDigital, a subsidiary of AMP, is a modern day digital partnership with innovation and agility at its core. AmpDigitial assists brands in communicating more effectively with their audience and focuses on connecting content with commerce in the digital age.

I’m the group head of digital for AMP and general manager for ampDigital (a subsidiary of AMP). My role is to ensure we embrace the future in a way that increases the relevance and usefulness of our brands in the lives of our audience and partners on a daily basis.

The company started with Cosmopolitan 34 years ago at which point it was important to promote a strong, fearless female image in a society then (1984) in the depths of apartheid and patriarchal culture. Through the years AMP added brands to the stable to give new content solutions to South African women as they moved into different life stages and developed new needs and interests. The audience needs have always been front and centre.

What has been the journey for those brands from print to online?

Digital is not constrained by the lead times of print and allows us to be agile for both audience and advertisers. We are able to connect with our consumers 24/7 instead of just for a few days around the time of the print magazine going on sale, and our various channels facilitate direct, immediate engagement and build a two-way conversation.

The measurability of digital shows us exactly what appeals to our content consumer and what captures her attention. Such data is valuable, editorially and commercially. The insights gained help us conceptualise and plan content and brand extensions for audiences and clients, and facilitates the creation of accurate, measurable case studies for our advertisers.

Cosmopolitan was an early mover into the digital space and has adapted to the inherent opportunities with great success. Its huge millennial and digital-native Gen Z base allowed us to launch exciting platforms, like Hustle, which empower young women and create experiences that transform their lives. Video plays an important part in our online strategy based on the interest of our audience.

Good Housekeeping has an extremely engaged audience in both English and Afrikaans. The type of content the brand produces makes for much-searched-for online content (recipes to hacks, tips and tricks to make her life better/easier) and is drawing a constantly expanding online audience.

Marie Claire has a large, highly engaged, activist audience that keeps us on our toes. Twitter is an important channel for Marie Claire and the audience is interested in longer-form online content which is unusual in the South African market.

House & Leisure is a local-only brand. The audience is design savvy and curious; they relish entering other people’s houses through our content and discovering the trendiest spots to hang out in. They are also interested in getting the practical help on how they can recreate the décor looks they fall in love with. Video and imagery play an important part in this brand’s online journey.

How developed is online publishing in South Africa generally? Are the issues you deal with universal, or are there some in particular that specific to the country?

Online publishing has come a long way in the past ten years – some publishers have adopted and perfected digital-friendly processes and systems for their print publications in an effort to make online publishing easier and more cost-effective.

South Africa is a very diverse country with diverse languages/cultures and values – we try to find unifying insights that speak to the entire market. We are a mobile first country – we have 28.5 million internet users (52 per cent of the population being online). Of these, 74 per cent are using mobile phones. 33 per cent of internet users access it via a mobile phone to browse, shop and do all personal banking. For these reasons, the type of content we produce and design needs to be mobile adaptive.

We have to consider this in the type of content we publish online. One response we have developed to serve our audience better is the #DataFree version of Cosmopolitan.

Monetising digital content is a universal constraint. Some subscription-based online publishers have seen success with a ‘leaky paywall’, such as that of the New York Times. This signals a change in behaviour – users are now willing to pay for trusted online news, especially if it is a bundled deal.

Our model includes experiences and new platforms like Ready to Shop, all of which seek to offer the solutions our audience is seeking.

The rise of ecommerce in South Africa is in line with global trends in first world economies. While online shopping is yet to be widely embraced, spend is estimated to reach R45.3 billion (US$3.75 billion) by the end of this year. This figure represents a 19 per cent increase from 2017. Research released by PayPal suggests this trend will accelerate, projecting that online spend will reach R62 billion ($4.28 billion) by 2020. The research also indicates that 62 per cent of online shoppers have used mobile devices for their purchases, resulting in an estimated R14.9 billion ($1 billion) spend this year – around 33 per cent of the total spend.

How are you currently using data and audience insight? How does it power editorial decision making and advertising?

We are obsessed with our audiences and the data we draw helps us to understand them better and serve them more relevant content, experiences and offerings. In a quest to serve them better, all teams study platform data on a daily basis to keep a close eye on what consumers read, engage with and watch, along with their feedback and questions. Our promise to collaborators is that ‘We Know Women.’ It is therefore imperative that we are constantly in contact with our audience.

We encourage engagement across channels, target content based on relevant audience insights and themes; we run surveys, polls etc. to establish the interests of our consumer and help us create content that is more relevant to her and her interest group.

For example, Ready to Shop, our ecommerce platform, aims to close the gap between content and commerce, bringing the digital-advantage of immediate gratification to all channels, including print (via QR codes).

We have also formed an in-house commercial hub, which functions like an ad agency to allow us to work closely with our advertisers to create content that appeals to our audiences.

You say partnerships and collaboration are central to improving the user experience? Can you explain this a little more?

Our recent Ready to Shop launch is a great example. We are offering consumers an easy way to purchase carefully chosen content, utilising existing functionality that they already engage with (QR scanners on their preferred apps). We have created a content-to-commerce solution that delivers an instantly shop-able, highly curated, expert edit of merchandise for our consumer.

By enabling our readers to shop the items they find inspiring, directly from our pages via their mobile phones, we are completing the ‘content-to-commerce loop’, which will in turn make our brands more relevant and gratifying for our consumers, while delivering value to our partners. 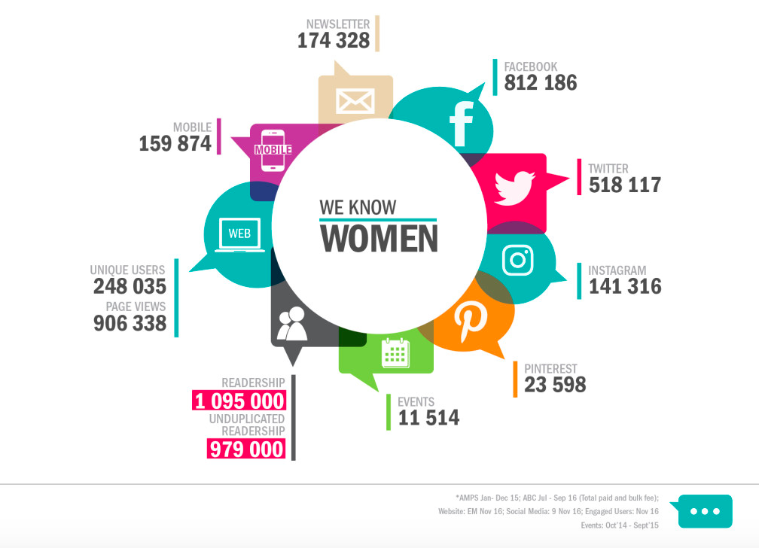 What does the social media world look like in South Africa? Which are the main platforms you engage with?

Social media is largely driven by mobile access (98 per cent of South African Adults have cellphones in their households) with Facebook (46 per cent) the biggest social media platform, followed by YouTube (45per cent) and Instagram (27per cent). In South Africa, 32 per cent of the total population, 18 million people, are active users on social media with 28 per cent (16 million) being active on a mobile device.

South Africa hasn’t reached a saturation point for Facebook yet and continues to see a 20 per cent year-on-year growth. Most of this growth is based on increasing access to smartphones and mobile devices with app capabilities – 89 per cent of FB users access the platform via mobile.

With 18 million people active on Facebook every month in SA, the biggest audience on Facebook in SA are 18 to 34 year olds. This correlates with the basic target audience for Associated Media Publishing, apart from the fact that 49 per cent are men.

Instagram has shown the biggest growth in the past year with almost four million people now active on this platform.

The most popular messaging app in South Africa is WhatsApp (49per cent), followed by Facebook Messenger (32per cent), Skype (19 per cent) and WeChat (nine per cent).

LinkedIn, Twitter and Pinterest continue to enjoy a solid, steady market share of 23 per cent, 22 per cent and 23 per cent respectively. Pinterest has great potential, but this social network has not yet released paid media (advertisements) in South Africa, making it impossible for publishers to increase investment in the platform (apart from manpower).

The biggest change in online behaviour we’ve seen in the past year has been around videos. Every day, 19 per cent of internet users watch videos online compared to only four per cent in 2017. Weekly and monthly video views have increased eight per cent and three per cent respectively, and the number of internet users who never watch videos online has decreased from 59 per cent to 36 per cent. It is expected that this trend will continue with more videos being created for digital platforms, more investment in video production and paid media, and higher penetration in the South African market, thanks to increasing accessibility to mobile devices. Bandwidth and the cost of data are the biggest obstacles to the growth of video views.

What lessons have you learnt in your local market that you think are important to share to your colleagues in other countries?

The audience is in control. Respect them, put them first and never underestimate them. Understand and anticipate their needs and challenges – the barrier to ecommerce in our market is not the availability of ecommerce but challenges like payment, language, lifestyle and values.

What works in one country doesn’t necessarily work in another. In South Africa, we’ve seen that ecommerce on mobile devices is more popular than in other countries, primarily because it’s easier and cheaper to get access to a mobile device than it is to a desktop.

You can’t fix a failure if you do not know where it’s coming from – data is everything. Don’t be afraid to fail – it’s not just return on investment, but return on innovation we’re after, but fail fast and learn quick.